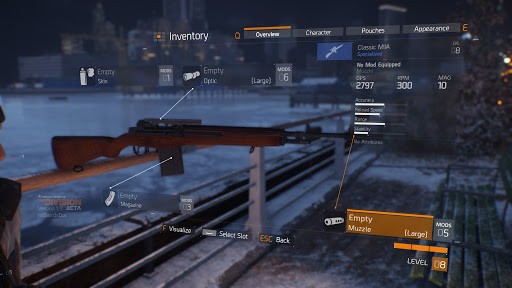 The Division 2 M1A Changes Not Included in TU9 Notes, Here’s What’s Happening to It

Just yesterday, Ubisoft Massive released The Division 2 Title Update 9, and along with it, the huge patch notes that covered everything from Exotic item changes, to bug fixes. Unfortunately though, it seems one thing it didn’t cover are The Division 2 M1A changes.

In the latest State of the Game devstream, Ubisoft explained why The Division 2 M1A changes weren’t included, as well as the next steps planned for the weapon.

The first topic was a short explanation of why the M1A nerf was not in the patch notes and how they plan to avoid that in the future:

They saw the general reaction to the M1A nerf itself, the amount of the nerf and this is how this came about:

Studio also talked about what they plan on skill builds moving forward, and that the Raid 2 is still set for spring.

As for Title Update 9, this patch introduced a few new bugs as well. Below is the priority list of stuff the studio is looking to fix from yesterday’s patch.

We wanted to give you an update on the top priorities we are currently working on regarding bugs that have been introduced with Title Update 9.

No word yet on when the next patch will drop, but it’ll likely be sometime in May.