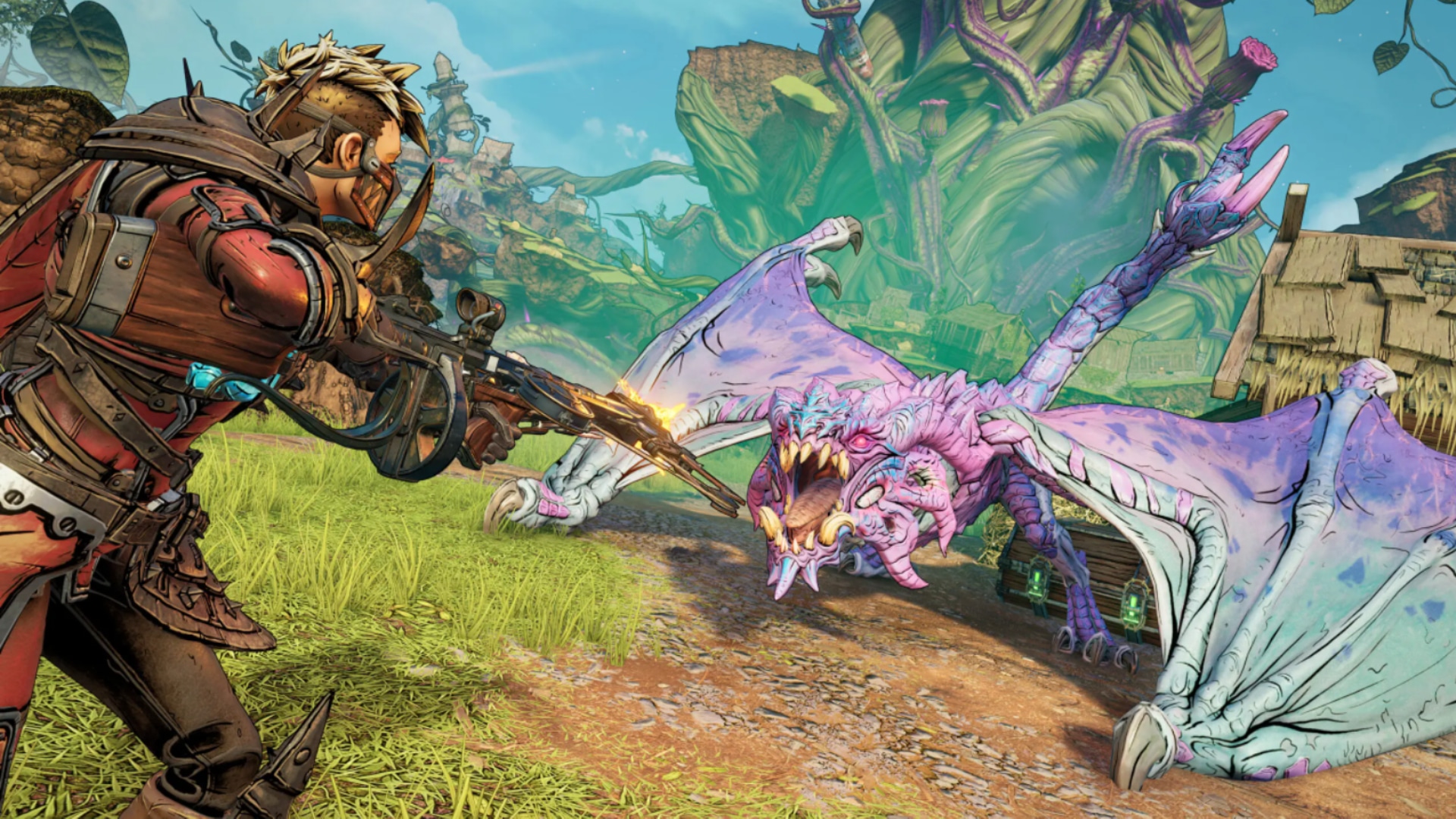 Tiny Tina has always been one of my favorite characters in the Borderlands games — a child that is not only obsessed with blowing things up, but gets an almost euphoric glee from it has always been endlessly entertaining. I really loved the first two Borderlands games (the third, not so much), so one would assume that a spin-off with Tiny Tina and the loot-based gameplay hook infused with magic casting seemed like it was right up my alley. And for the first half of my time with Tiny Tina’s Wonderlands, I found myself back in the rhythm and was hooked on the loop. Unfortunately, a series of bugs, and design decisions caused my enjoyment to fall right off a cliff.

The framing device for Tiny Tina’s Wonderlands is Tiny Tina (the prolific Ashely Burch) is a dungeon master for the Borderlands version of Dungeon’s and Dragons, “Bunkers and Badasses.” I played the “newbie” to the party, taking on the role of the “Fatemaker” tasked with taking down the Dragon Lord (Will Arnett), the big bad of this campaign. The story is actually the best part of the game, as the writers use this set-up to reveal things and Tiny Tina’s personality and why she is the way she is. I genuinely enjoyed how this played out and how The Dragon Lord was more than just the made up bad guy for me to fight. There’s a history that is revealed throughout the game that gave it more personal and relatable stakes and speaks to a theme of the creator and the created in art that I found very compelling. 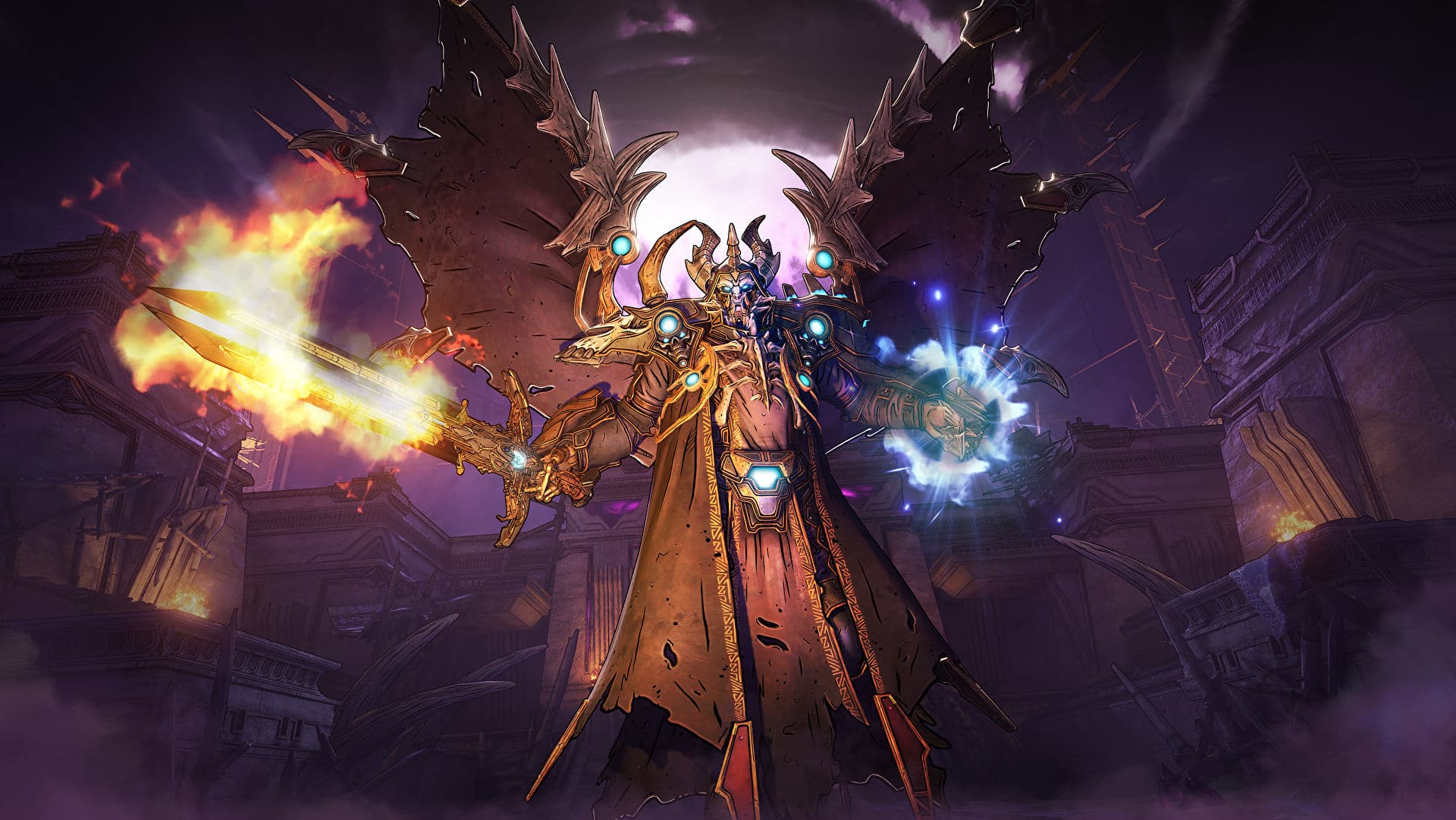 Along for the ride are Valentine (Andy Samberg) and robot Frette (Wanda Sykes who can make reading a phone book out loud interesting simply through her intonation) who offer commentary on the events of the game as I progressed through the story.

So while the story itself I found to be good, the dialogue is not. Look, I get that humor is entirely subjective so if you find people that speak in meme and things like “Princess Buttstallion” funny, you’re going to get a lot of mileage from the “jokes” in this game. Unfortunately for me, I do not, so the humor got old — fast. Not to mention The Newbie repeats the same, unfunny things over and over again over the course of my 30+ hours to complete the campaign. Things like “Who knew heroing would require so much math?” and “I’m not lost, I just don’t like maps” are not my idea of comedy. And again, subjective. If you’re into this, you’re going to enjoy all of it.

All About the Loot Loop

Gameplay wise Tina Tina’s Wonderlands is Borderlands through and through. Shoot enemies, kill enemies, loot enemies. As per usually, the higher tier the weapon the cooler it’s effects are. My personal favorite is any gun that you throw away to reload and it creates a tornado of daggers upon impact which does additional damage on top of your base. It’s a formula that has always worked for these games, and by and large, it works here. In place of grenades this time are spells, they have the same kind of status effects grenades have in the previous games, but are infinitely more fun to use. Pulling the moon down on top of enemies as they get sucked into its gravitational pull is wildly satisfying. As is throwing an electrified bird at enemies to give them bolt damage over time. There are all manner of spells and based on the procedurally generated nature of the status and bonuses of weapons, I can’t imagine the time it would take to try and exhaust every possible permutation. 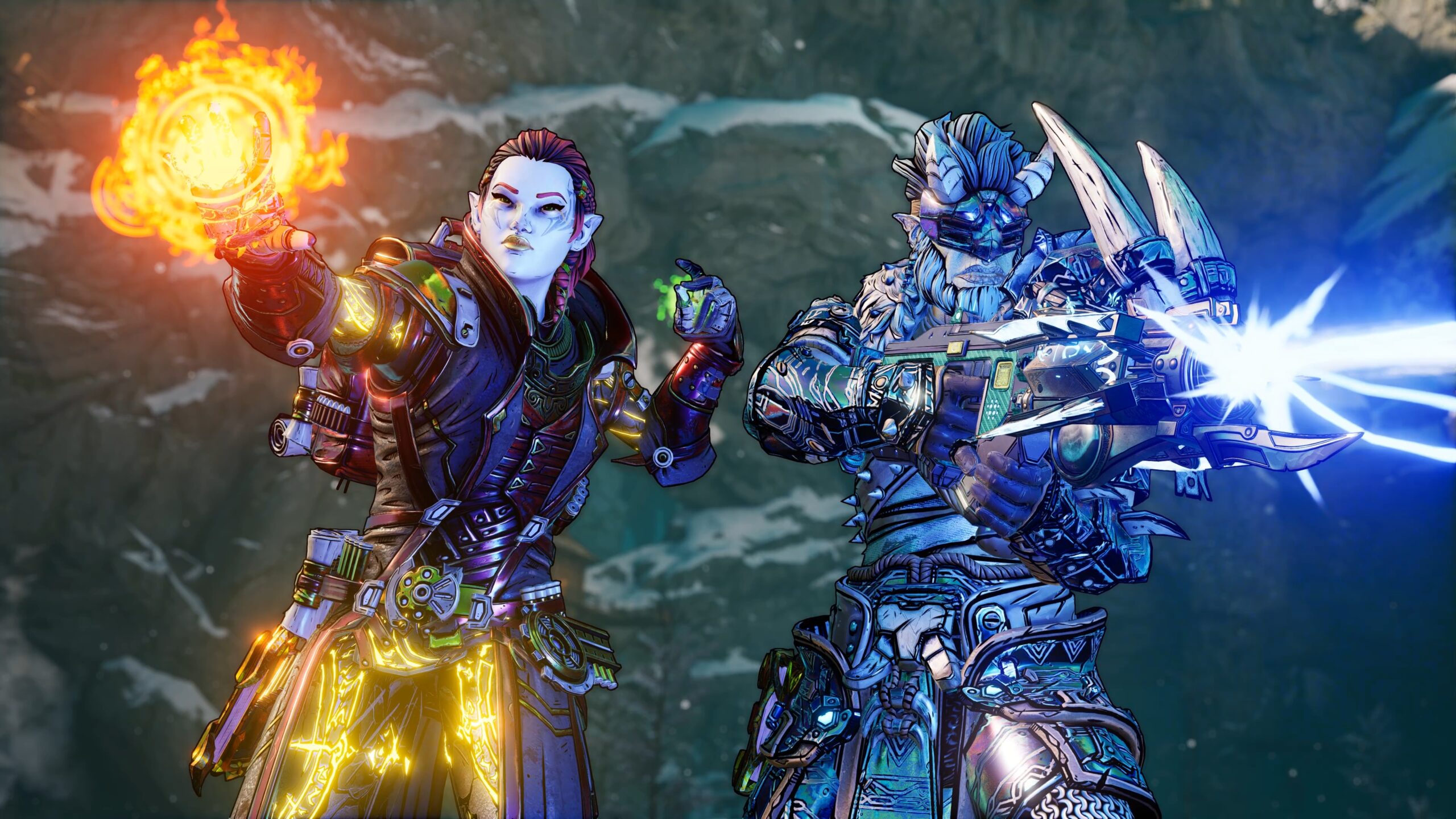 And like any loot-based game, there are different tiers. Here it’s “common,” “uncommon,” “rare,” “epic” and “legendary.” I don’t know if it was just a string of bad RNG that lasted for about 25 hours of my 30 hours or so playthrough, but I rarely found anything that I truly loved using, and when I did, I stuck with it way beyond its usefulness. I was using guns I found at level 20 well into the endgame. The same went for shields. I used a 1200 capacity shield for about 12 levels before I found something better. It really sucked the fun out of the gameplay loop for me when basically everything I found was just money since I sold everything. My buddy, whom I played with for a few story and side quests, found the coolest guns and spells througout that would just melt enemies much quicker than I could. So clearly it’s not a game issue overall but rather my unfortunate RNG. That said, it still impacted my experience negatively because I eventually stopped doing side missions since I never felt the rewards would be worth it.

Which brings me to my biggest issue with the game. If you stop engaging with the side content, the game straight up tells you that you’re underleveled for certain story areas. So while it gives you the option to proceed, the only other option is to do the side content. If a game is fun enough and the rewards are good enough, sure. But in my experience with the game, the side content wasn’t worth it for anything other than to level up and in a loot-based game, that just isn’t enough. If I felt like it was worth my time to go off the critical path, I would have. I just didn’t. So I had to trudge through, beating my head against a few bosses that just weren’t doable with my current weapons. Thus, I had to go back into the overworld and do some side quests. You might be reading this and saying, “Yeah, duh. That’s the game” and you may be correct. However, the game wasn’t offering me enough incentive to want to do that and being forced to do it in order to see the game through just rubbed me the wrong way and tainted the entire last third of my experience.

And none of my frustrations were helped by the amount of bugs I experienced in the game. Beyond terrible connection issues, my quest log would simply just be empty at times, despite having a ton of side quests and a main quest to do. Other times a message regarding my online status would appear on the left side of the screen and wouldn’t go away until I completely quit out and closed the game. I had NPCs stop doing whatever it is they were supposed to be doing so I would have to fast travel out and back to get them to start going forward. I can put up with bugs if I’m really enjoying a game but by the time I go towards the end all of this was death by 1000 cuts. 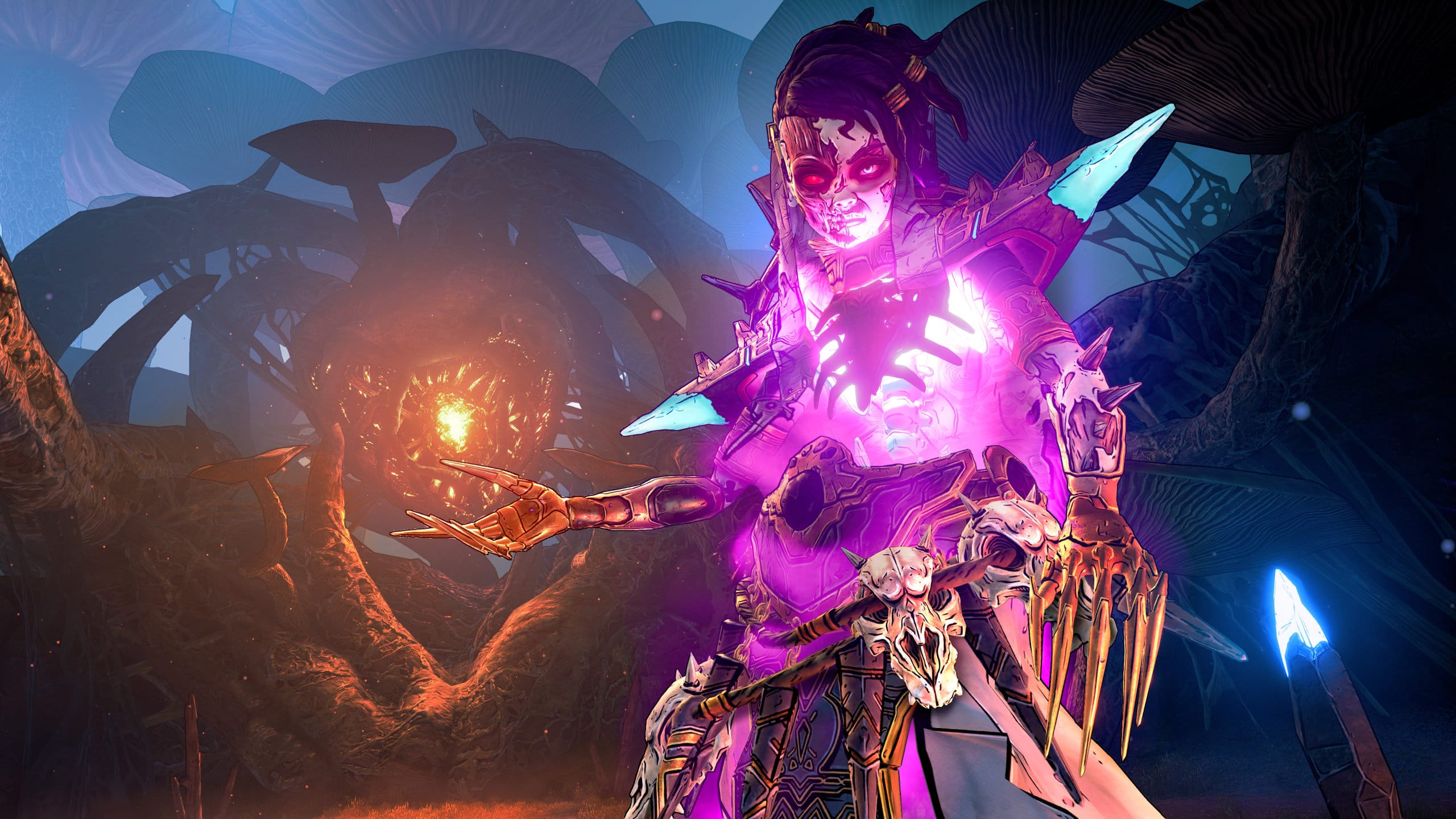 I can’t say I didn’t enjoy all of my time with Tiny Tina’s Wonderlands, because I did enjoy quite a bit of it. And when they patch out the bugs I’m sure it will be a much better experience. Unfortunately, the things I butted heads with that are inherent to the design of the game sapped all of the joy out of it and by the time I finished the campaign, I just wanted to be done with it and move on to something else.

Ghost Recon Breakpoint Update 2.02 Out for Long List of Bug Fixes This April 5