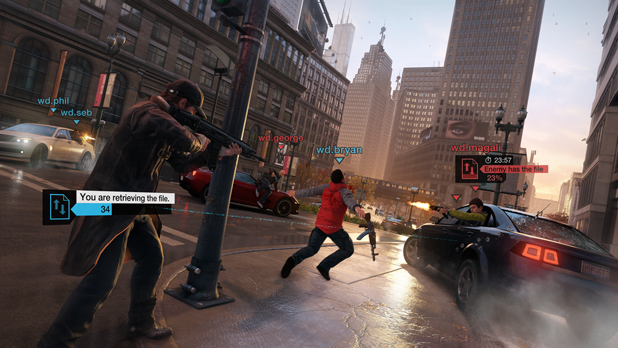 Earlier this week, Watch Dogs developer Ubisoft gave fans a more generous viewing of the game’s unique online experience. We also gathered a handful of new details yesterday that unraveled some of the mysteries surrounding player invasion and the different ways to play multiplayer.

Today, Ubisoft spills everything you need to know about Watch Dogs’ online experience in a multiplayer guide written by communications manager, Gary Steinman, on the Ubiblog.

He grabbed a few quotes from Watch Dogs lead gameplay designer Danny Belanger who says, “We don’t talk about it in terms of single-player and multiplayer. It’s all online. It’s seamless. You continue your game. That aspect, for me, is crucial because otherwise it’s a break in the experience. It all feels like one experience.”

In addition to free-roam, there are four different online modes players can participate in; Intrusion, Decryption, Tailing, and Racing. Here’s the description of each, according to the Ubiblog:

“Belanger describes this as a ‘techno high-and-seek where you need to steal data from your opponent and get away. He can actually stop you if he finds you with the profiler.'”

“Those who want a highly competitive team-based throwdown will find it with this four-against-four PvP mode. It’s fast, it’s intense, and it’s fully integrated into the open-world Chicago.”

“If you enter someone’s game, you can follow and observe him. The goal is to gain valuable information before escaping. As Belanger explains, both the tailing and intrusion gameplay are built to ‘create a neutral-positive dynamic between two players that’s in the universe of Watch Dogs. If someone comes into your game just to kill you, it’s not fun.'”

“As straightforward as it sounds. Players can use different cars and race on different tracks, all set within the game’s world.”

Steinman and Belanger assures readers that players won’t be bothered by multiplayer during story missions. “If you’re in a narrative experience, that’s your narrative experience you’re living in,” Belanger says. Therefore, the game will automatically turn multiplayer options off during those periods. “We try to make sure it’s when you’re available and during your free-roaming and you’re not doing something else that could be disrupted. That’s when we turn it on and allow players to come in and invade you.”

As we learned yesterday, player invasion and other multiplayer options can be turned off indefinitely if players don’t wish to be bothered by it.

Belanger also touched a little more upon Watch Dogs’ Notoriety system. “It’s your fame,” he explains. “It’s your rank as a hacker. If you are hacked you’ll lose a bit of notoriety.” He adds that there are specific skills players can acquire, or lose, in their Notoriety skill tree as they play, all which should be easily achievable. “We didn’t want it to be frustrating or a punishment,” he says. “The goal was just to create a cool dynamic with something at risk, but not something that will make you upset and angry.”

But there is some depth there that players can choose to explore. “The more you participate, the further you go – and then Notoriety becomes a leaderboard,” Belanger added. “You can remove some points from people and that will affect the leaderboard. People will be competing to be the best.”

As was demonstrated in the Watch Dogs multiplayer developer commentary earlier this week, players can also choose to engage in multiplayer activities via mobile devices and a companion app. The app puts players in control of a ctOS agent whose job is stop Aiden Pearce by deploying Police units and hacking objects. It has it’s own progression that is not tied to your in-game profile and can even be used by players who don’t even own a copy of Watch Dogs.

So, with a better understanding of Watch Dogs’ online experience and the number of different ways you can interact with others, what are you going to be trying out first?