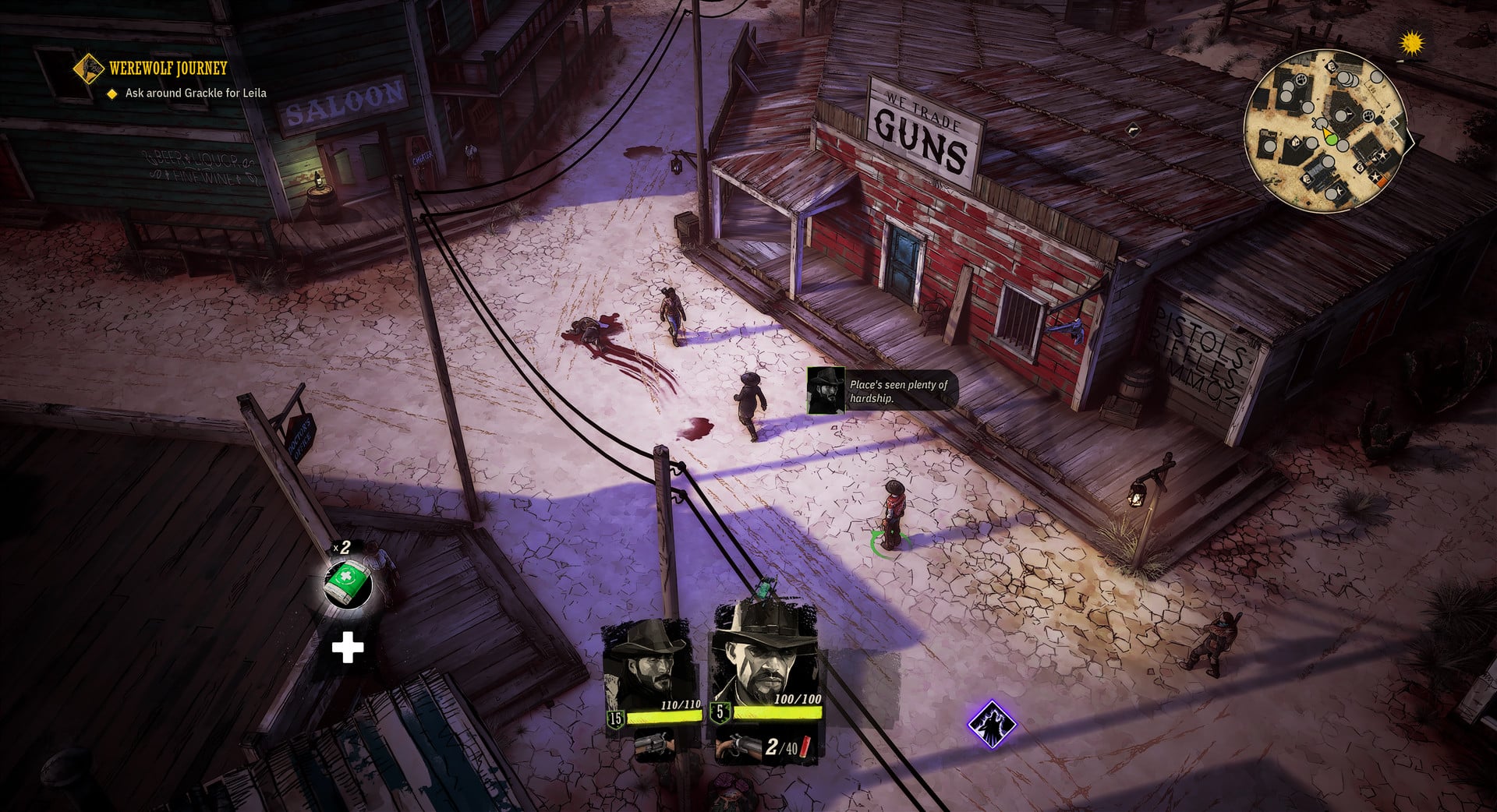 WolfeEye Studios has pushed out Weird West update 1.12, and this is for patch version 1.04! This brings new features, and a host of bug fixes and adjustments to the game. Read on for the Weird West September 13 patch notes.

With Patch 1.04 we are trialing a new alternative aiming system, different from the classic twin-stick shooter model, where the camera controls are preserved while aiming. This new system can be turned ON/OFF at any point (including in an existing playthrough) in the gameplay options.

A new game mode will unlock with Patch 1.04, bringing permadeath to the West and a new high-stakes way to play Weird West.

When playing in Nimpossible Mode, manual saving is not possible. The game will auto-save your progress, and you can play and reload from that single dedicated auto-save slot only. Nimp Heads you find during your Journeys will allow you to resurrect, but once you are out of Nimp Heads, death is permanent, your playthrough is over, and the auto-save file is deleted. Are you ready for the hardest challenge yet?

To go along with the new Nimpossible mode, some side content (available only in Nimpossible) has been added to the game to support the lore around the resurrection process and the deal struck with the Wanderers. This includes two new travel encounters and a side quest that will unlock through your Nimpossible playthrough. The video below shows the starting point of the narrative thread.

Here is the list of the key fixes shipping with Patch 1.04 to be released on Sept 13th!

– Fixed objective sometimes not progressing after killing the Ravenous wave in the Protector Journey preventing player from entering Olvidado Pueblo
– Fixed various rare crashes happening during gameplay
– Fixed Shelby Cross and Sheriff Albright bounty objective not completing if killed in one blow with melee weapon while player was undetected
– Fixed erroneous occurrences of Pigman Hero or Protector Hero leaving the player’s posse during combat
– Fixed not being able to claim bounty reward in Cedar Flats during Oneirist Journey
– Fixed various cases where the brand would not correctly spawn on dead hero corpse or grave during Oneirist Journey
– Fixed cases where Calamity/Player Horse would permanently disappear during travels
– Fixed Posse members stealth quitting the posse during travels due to reputation loss
– Fixed bug where it would not be possible to talk to any ghosts in the game, at Olvidado Pueblo or for side quests
– Reenabled intro movie on Playstation now that Sony’s latest firmware fixed the audio engine issue
– Fixed various edge-case objective blockers around the Wishing Tome and Heroes being at the Broken Steppe during Oneirist Journey
– Fixed game freezing when being hit by Cave Terror’s rock during Cave Terror travel encounter
– Fixed cases of items disappearing from horse saddlebags
– Fixed some overly compressed UI visuals on Playstation
– Fixed blocker with Illiterate Love Notes Side Quest objective
– Fixed amulets properties changing on save/reload when stored at bank or in saddlebags
– Fixed researcher taking wrong items from player inventory when giving her silver knives during the Werewolf Journey
– Fixed underground context switching to outdoors while saving/reloading in one of the mine locations added with Patch 1.03
– Fixed rare case where ending questionnaire would not trigger and would directly skip to end cinematic
– Fixed dead Hero corpse spawning out of its player-made grave on save/reload
– Fixed Relayogram item being stuck in player inventory if you found Galen’s relay before decrypting the Greenwood relay
– Fixed display of acquired key ring notification upon recruiting previous Journey Heroes
– Fixed blocker with blacksmith quest in Bounty Hunter Journey if you opened the cell before the quest started
– Fixed erroneous trespassing triggering while waiting around Galen in Galen’s Crossing dining room
– Fixed upgraded weapon not updating its icon on the HUD right after upgrading it
– Fixed wrong reputation notification text when freeing prisoner in Oleander Temple
– Fixed unequipping amulets with elemental resistance also removing the elemental resistance of the currently equipped vest
– Fixed weapon unequipping itself when upgrading it at the blacksmith forge
– Fixed enemies AI getting stuck when choosing fist fight option in Illiterate Love Notes side quest
– Fixed Saloon Beds being free in all location after paying for a bed once
– Fixed shopkeeper wrongly charging you for the cost of item you could not buy due to your inventory being full
– Fixed blocker with Snack’s objective in Bounty Hunter Journey if you had first knocked out Snack before agreeing to his deal
– Fixed Ruth wrongly being selected to host the Cedar Flats event in the Oneirist Journey if you go there while having her handcuffed due to capturing her during a Bounty Mission
– Fixed hollow tree loots respawning when they should not
– Fixed NPCs in the Fighting Pit sometimes turning against player after the arena skirmish during the Pigman Journey
– Fixed rare case of side quest item not spawning in abandoned town for item fetcher side quest
– Fixed Bounty Hunter Shrapnel Mines not being properly saved/restored upon saving/reloading the game
– Fixed Pigman Joe snow globes being resold with the rest of junk items when selling all junks at the general store
– Fixed Ravenous wrongly counting towards humans kill count
– Fixed some story posse members lacking background story blurb in the Journal Reputation TAB
– Fixed Shelby Cross and Sheriff Albright lacking a description on their Bounty Poster
– Fixed Protector Character holding pickaxe the wrong way when mining
– Fixed NPCs being killed if you spammed the attack key while trying to take them down with non lethal melee weapon
– Fixed AZERTY keyboard not properly displaying bindings for numerical keys
– Fixed edge case with Maryann not being present at Fort Glenn during Protector Journey
– Fixed turning Ruth into a Pigwoman counting towards human kill count
– Fixed weapons showing under player’s horse when put inside the saddlebags
– Fixed some of the junk mail having wrong texts
– Fixed Posse members not properly crouching after loading a save file where they were crouched
– Fixed mound caches sometimes duplicating on save/load/revisiting locations
– Fixed Coven Fruits having a temp description