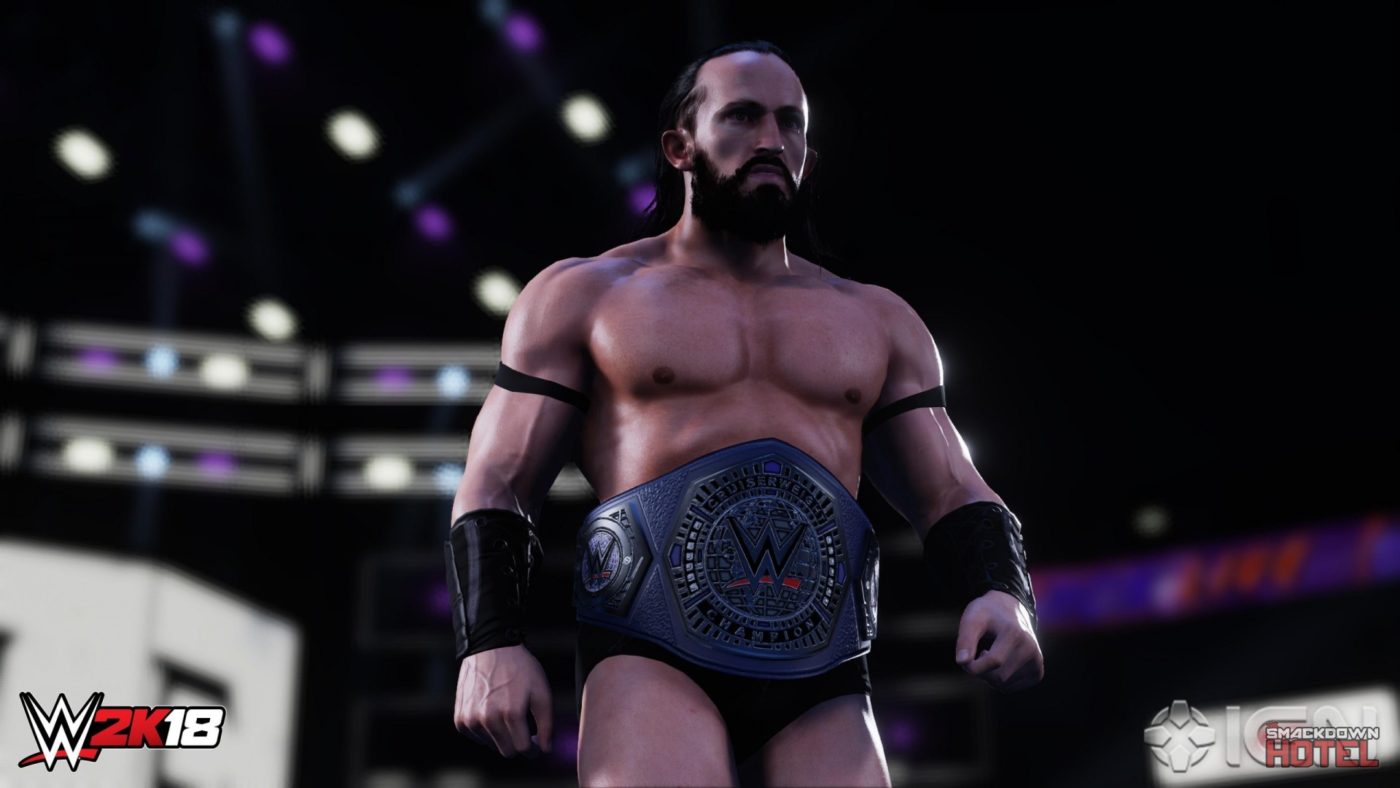 The WWE 2K18 Universe mode has been overhauled for this year. Universe is “a system that recreates the WWE broadcasting experience,” and in 2K18 new and improved features have been added.

Game designer Cristo Kyriazis has given comprehensive overview of what’s new to Universe:

One of the most exciting parts of Universe is the rivalries that happen between Superstars. Rivalries occur between either two Superstars or two teams of Superstars, leading to a storyline that can play out over many months in the Universe calendar. Storylines feature cut scenes and put the rivals in scenarios that you won’t normally see through regular matchmaking. Players have a choice in creating their own rivalries or letting them happen on their own. We wanted to improve our systems for rivalries this year, and we’ve made some changes all around.

New for this year, rivalries are separated into two types: Potential Rivalries and Active Rivalries. As the Superstars compete in their matches, perform promos or perform run-ins on each other, a Potential Rivalry will be established between them. Looking at the Rivalries menu, you can see a meter for each Potential rivalry and the state it’s in. This meter will build up as the interactions continue between the potential rivals during their matches. Once the meter is full, it’ll enter a “Standby” state and move into the next available Active Rivalry slot in the following show. Think of Potential Rivalries as the build-up to a full-fledged rivalry between Superstars. 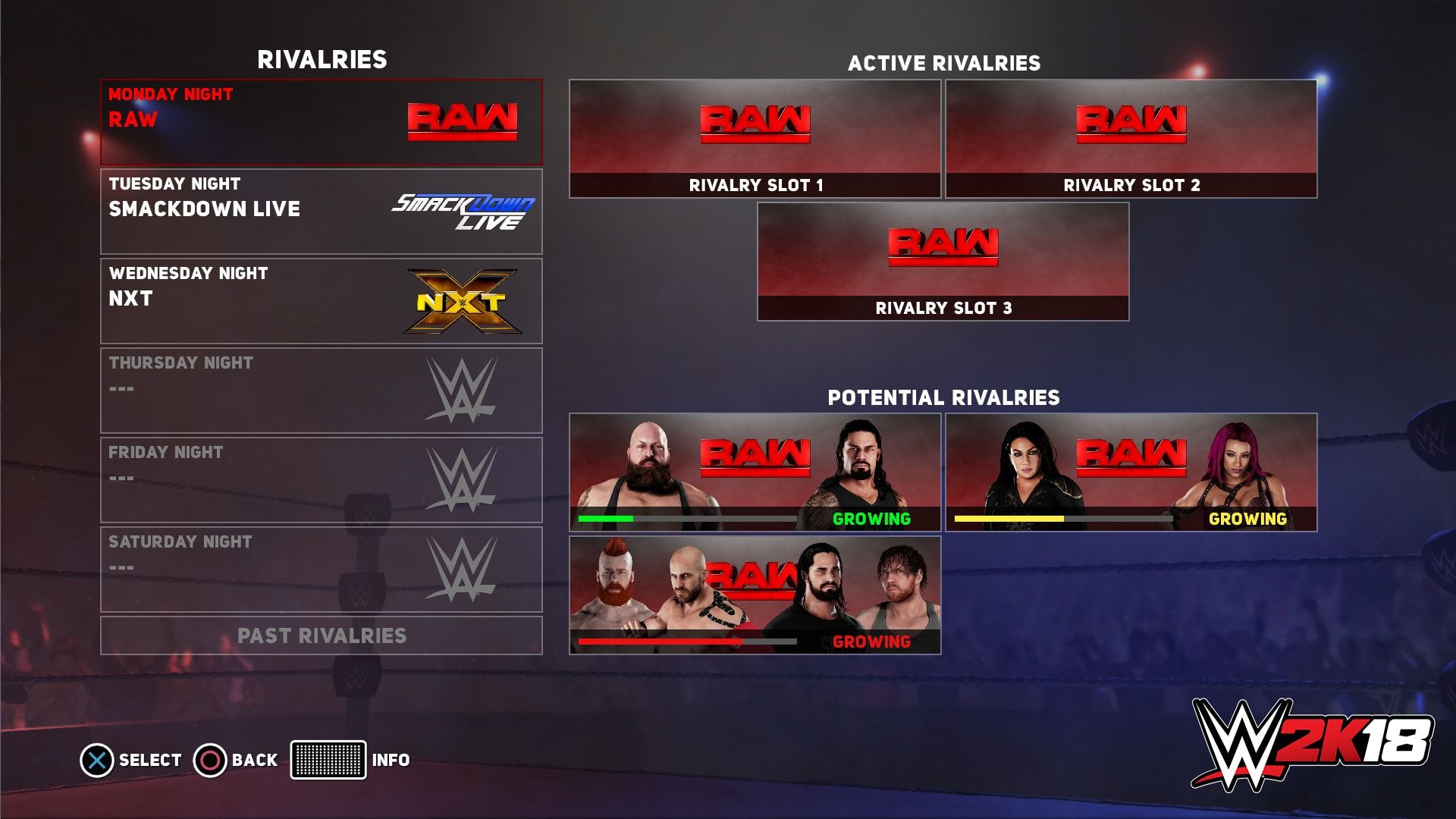 These interactions take the forms of promos, cut scenes, and run-ins. The interactions that happen are mostly random, depending on various factors related to the Superstars. Things like rankings, relationships, a Superstar’s crowd reactions and their personalities are some of the things that can influence the chance of an interaction happening, as well as the type of interaction.

There are also some ways players can influence Personal Rivalries through their own actions. Think of doing something that would get under an opponent’s skin or infuriate him/her or something that would make you want to get even. For example, attacking your opponent with a chair is a definite way of maxing out a Potential Rivalry’s meter.

Active Rivalries are the results of all the build-up, making the rivalry official and starting off many weeks of heated competition between the rivals. Superstars will fight to build momentum and have the advantage leading up to their big matches at the next PPV. The payoff varies depending on which Superstars are in the rivalries, things like climbing the ranks or  title match opportunities. The types of rivalries you’ll see, whether it’s a friendly rivalry between allies or a hostile brawl-fest between heated enemies, depends on the rivalry’s “Intensity.”

Intensity is a new addition this year, and it’s in both Potential and Active Rivalries. Intensity determines what’s likely to happen between the Superstars in a Rivalry and should help you identify from just a glance in the menus what kind of rivalry is taking place. Intensity has four different color-coded levels:

The Intensity of a rivalry will vary based on the interaction between the Superstars and is certainly likely to increase the longer the rivalry goes on. For example, a rivalry may start off at Medium Intensity after a call-out promo and then change to a High Intensity after one rival sucker-punches the other in the following week’s match. Players creating their own rivalries can choose the level of Intensity as well, increasing the possibilities further on what kinds of rivalries you can create. 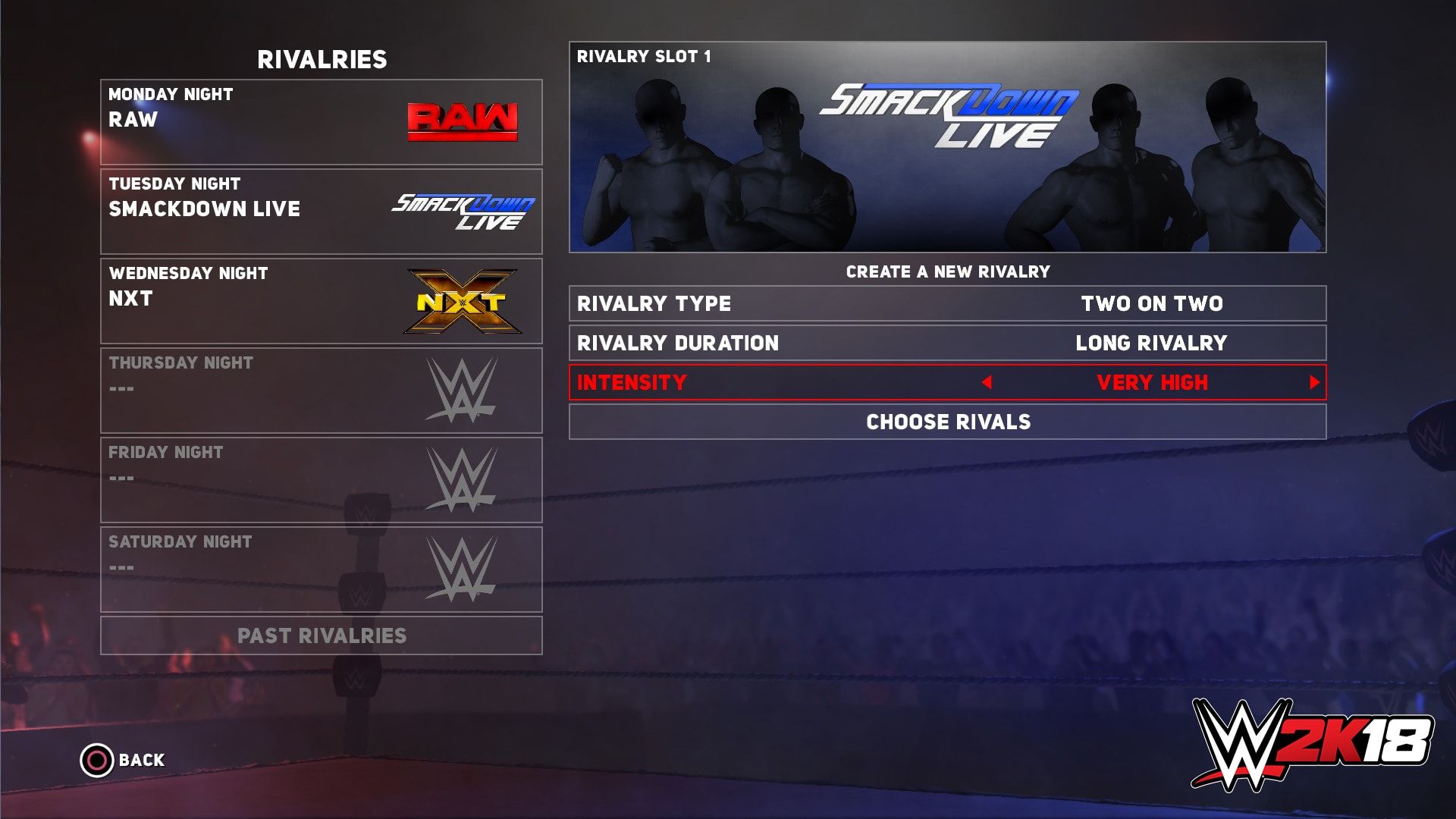 One important thing we changed this year was how our story system handled calendars with inconsistent PPV dates. Our previous system wasn’t ready to properly handle WWE’s brand split and the multiple PPVs per month. For us, this meant overhauling our system for the most flexibility possible. This is more of a back end, behind the scenes change that we worked on, but the result is that rivalries and storylines will now work regardless of when they start and when the next PPV is happening.

I’m excited we can share these details with all of you, and I hope you enjoy the changes we’ve made. Our teams here at Visual Concepts, along with Yuke’s, has worked hard on these improvements and with re-working our story system, and I would love to hear everyone’s feedback.

Along with the changes to our storylines and rivalries, we’ve implemented new systems that add more depth to Universe in various areas.

Something we wanted to represent in Universe Mode is how some Superstars push past their limits and go on an unstoppable run, as well as how the underdogs can fight their way up to the very top to win and defend championship gold. Power Rankings will allow Superstars to achieve these kinds of runs by boosting them with temporary attribute bonuses if they can climb high enough in the Power Rankings. This allows low-powered Superstars to fight their way to championships and match up with the best of them or turn an already powerful Superstar into an unstoppable force. 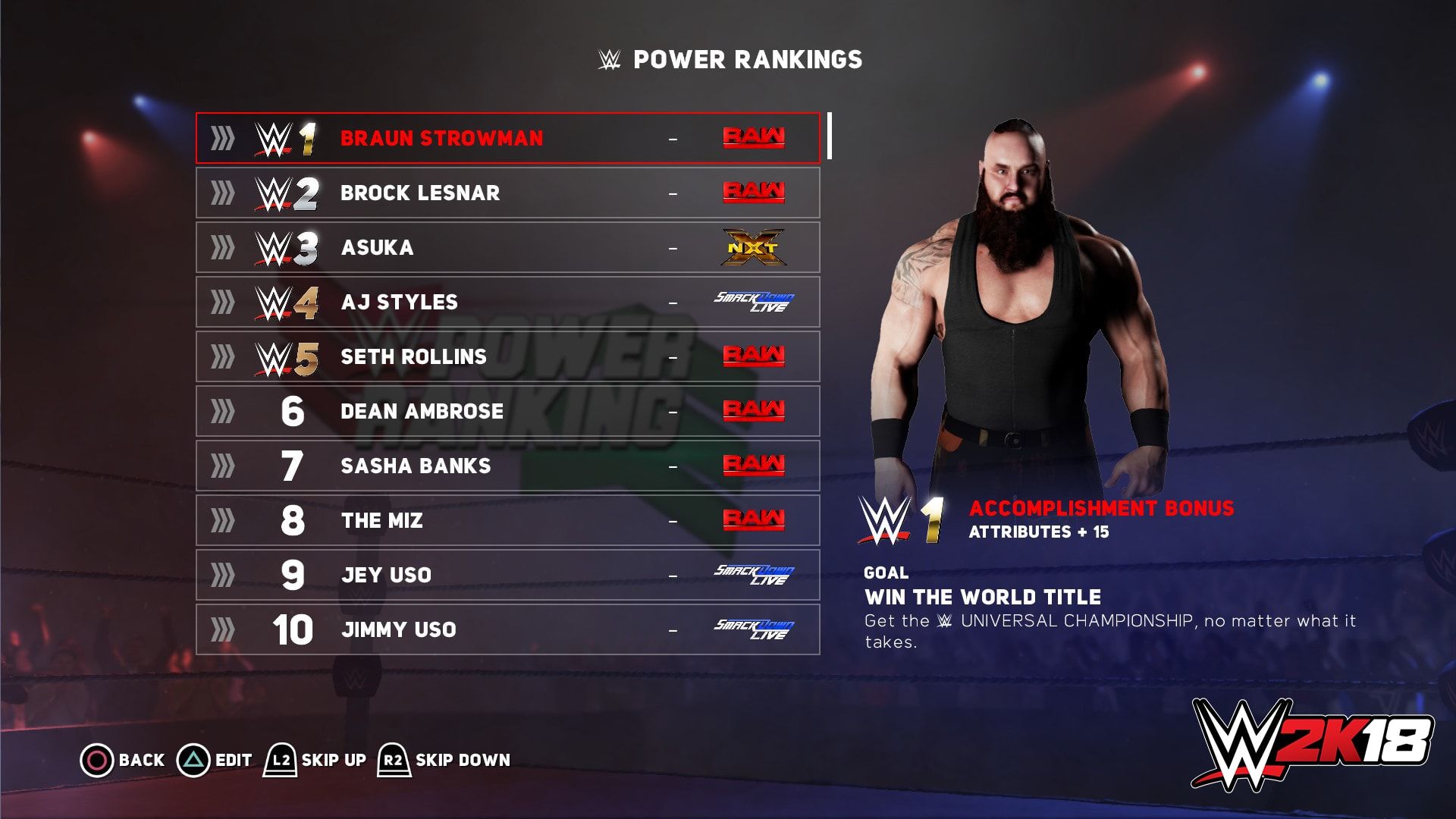 One of the challenges we’ve faced with Universe is trying to articulate specific motivations for the Superstars. It’s easy to say everyone wants a championship, but there’s a lot more depth than that when you watch WWE’s broadcasting. As a result, we’ve implemented personal goals for Superstars that they can chase after as they compete in Universe. 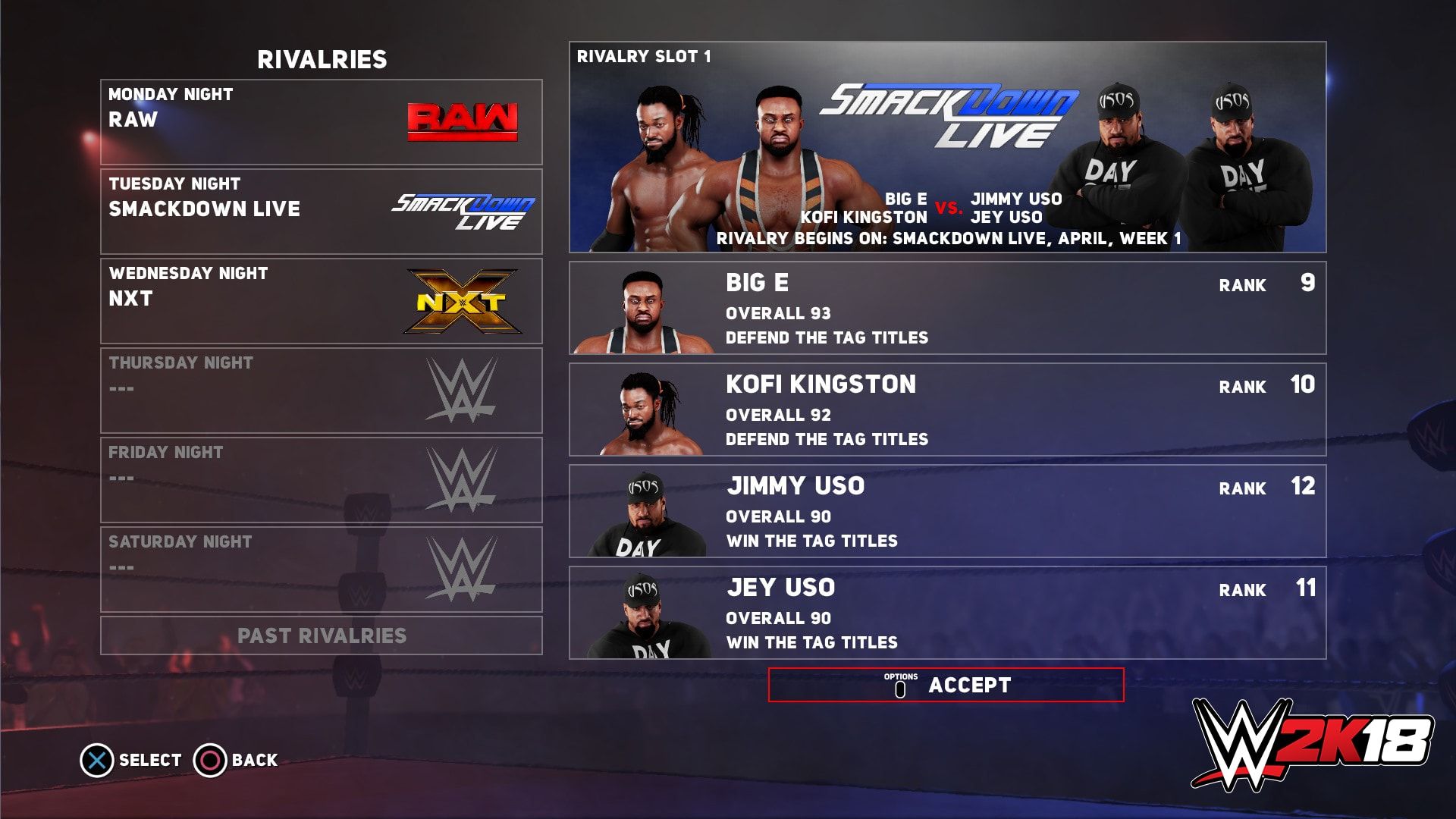 Goals change for each Superstar based on various factors like their rankings and relationships. Champions want to defend their titles and the No. 1 contenders want to win those titles, close allies may want to form a tag team while a team on a losing streak may want to split up, and so on. Goals have an impact on the types of matches and rivalries that will get started for the Superstars. You’ll also have the ability to customize goals for Superstars so that you have some suggestive control over how Superstars can be booked.

We’ve integrated some of the match type additions and improvements from Gameplay into Universe as well. You’ll see Eight-Man matches in Universe, such as Eight-Man Battle Royals and 4v4 Tag Team Matches. Just as with previous titles, you can customize the match cards of shows to suit your needs. This even includes the Custom Matches you create in the Creation Suite, bringing your own style of competition to Universe! 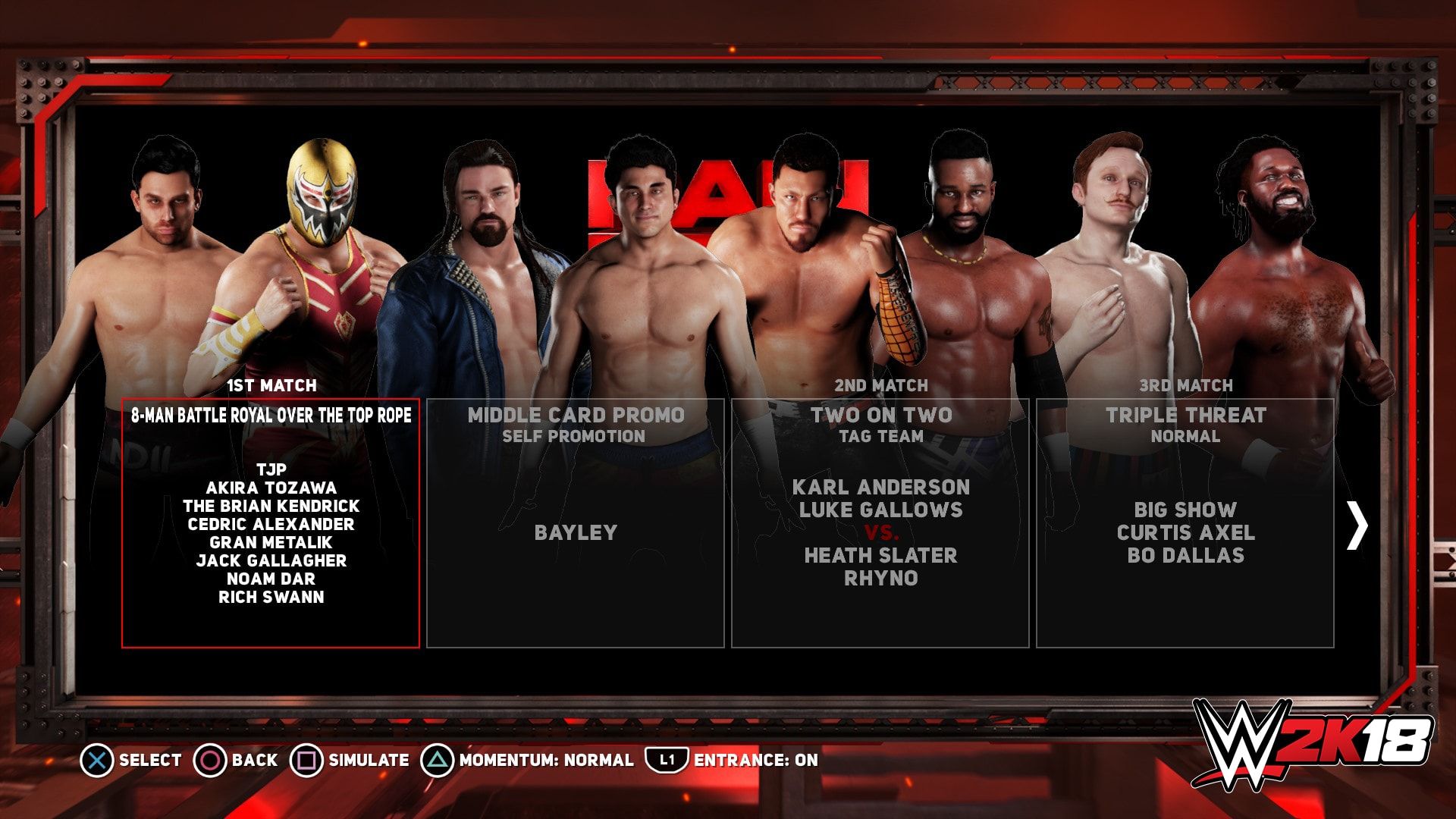 As you’re playing through matches, there’s a chance that one Superstar completely outclasses and overwhelms their opponents from the very start. Superstars with significantly higher attributes than their opponents can cause a squash match to occur, putting their opponents in a situation where they must mount a considerable offense to survive or suffer crushing defeat.

Which aspect of the WWE 2K18 Universe mode do you think sounds most exciting?

Xbox Deals With Gold List Now Up, Here’s All the Deals