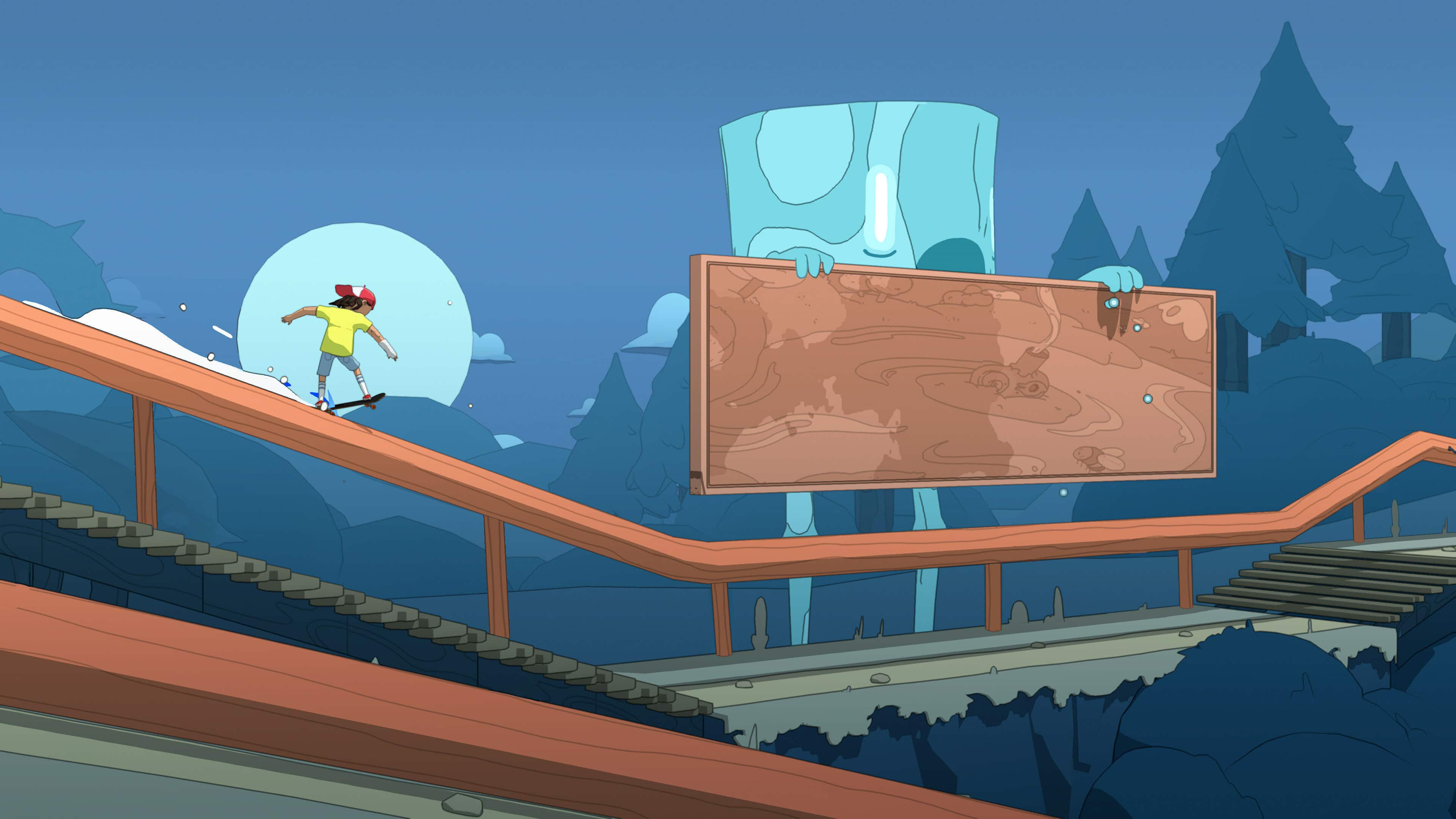 Skateboarding seems to have made a major cultural comeback in recent years. It was in the Olympics, we got remastered version of the first two Tony Hawk games, and they’re making another Skate game. Even with all that, the existence of OlliOlli World is, in a way, a pretty cool realization. Considering this series started as a small release for the Playstation Vita and PS3 that in a lot of ways, felt like an advanced flash game. Two full games and their different editions later, we have arrived at the third and biggest game in the franchise yet. As happy a story of fan support and continued passion by the developers at Roll7 as this game is, what remains to be seen is if it lives up to the reputation of the series. Let’s talk about it!

No, Actually There’s Lots of FX.

As someone who is familiar but has not played much of the previous games I went into this knowing that it was a skateboard-themed platformer and had a reputation for being fiendishly difficult. OlliOlli World has not disappointed me on either of these fronts.

The game opens with a cinematic explaining the nature and lore of this universe. Radlandia is a magical land founded through the power of Gnar by the Skate Godz, a mythological version of a skate crew like the Z-Boys, Shake Junt, or Tiltmode Army, who each created a region of the continent to match their personality and style. The Skate Wizard was established to maintain order, and is a human that has reached such a high level of skate ability and connection with the Gnar that they can be a link between the Skate Godz and mortal humans. You are destined to follow this path and become the Skate Wizard. It’s a funny, silly fiction that sets up what your narrative mission is going to be before taking you to the character creator.

The art and narrative backdrop show their inspirations on their sleeves. Though there are clear allusions to cartoons like Avatar the Last Airbender, and the stories of several of the Tony Hawk games the most prevalent inspiration is Adventure Time. This could have easily been a licensed game for that series with just a few minor tweaks and the inclusion of the main characters. It all fits the mood the development team is clearly trying to invoke and it has a silly funny air across the board. I wasn’t crazy about it initially, but I must say that it really grew on me, and it gives OlliOlli World a personality and sense of place the previous games really didn’t have before.

Musically I can’t say the same. The soundtrack is composed of easy listening electronica and soft EDM which is very relaxing and admittedly not to my taste and feels slightly at odds with the fast gameplay and colorful graphics. It’s not annoying or abrasive but doesn’t seem to add much to the experience. I found that this is a fantastic game to play while listening to a podcast or your own music. Music as always in my opinion is the hardest part of a game to measure for quality since music is more personal than other aspects of video games, so your mileage may vary. For what it is worth, it isn’t that the music is bad as much as it feels like it doesn’t match. Though I know our very own James would disagree with that statement as he loved the soundtrack.

As I said, after the opening cinematic you are immediately taken to the character creator. While it is not as detailed as something like the Saints Row games, it is still detailed enough to allow for some fun combinations. As the game progresses and you complete challenges you unlock a pretty wide array of clothing and gear options. It is a mixed bag, as there is quite a bit of filler that amounts to the same item in a few different colors or with different designs or patterns that you can’t really differentiate from similar pieces in gameplay. But I found that going back to change out gear every few levels when I earned something cool was a nice feature that made character creation a game-long process, which I appreciated. I really felt like my character was growing and changing as he was on this trip to meet the Skate Godz.

After character creation you get to meet the core crew you’re traveling with. The current Skate Wizard named Chiffon, the senior most member of the crew and old school gear head everyone calls Dad, Mike who’s a big man that loves smashing things and pushing his limits (evidenced by his metal leg) who runs a skateboarding magazine, and Suze the sassy videographer of the group. They’re looking for the new Skate Wizard since Chiffon wants to retire. You impress them with your ability to Olli (something you’d expect would be more common on a continent created for the sole purpose of skateboarding) and it’s off on your quest.

You are taken to a map screen with circles along the path you’re traveling. Similar to the game referenced in the title, Super Mario World, there are the main levels and detour bonus levels that sometimes have unique completion requirements or rules. There are five worlds full of these levels plus Gnarvana, which hosts a random level generator and a trick score competition mode to play the same short auto generated level as other players to compete for high scores. All of these worlds are unique and interesting. I particularly liked CloverBrook and BurntRock: the Forest and Desert worlds respectively.

Gameplay-wise the inspirations are also very well chosen and apparent. Structurally it is very similar to the Super Nintendo classics like Donkey Kong Country, and as stated, Super Mario World. Every level has the basic requirement of simply getting to the end of the run to move on to the next level, as well as another for doing the whole level in one go without crashing, three unique challenges for doing specific things in the level, and three increasing score goals that are presented as being the records of the local skate crew for that run. The basic level completion goal is easy enough, and even the one consecutive run goal is usually not overly difficult. The difficulty comes from the six additional challenges. Some are easier than others of course, but as the game goes on they become increasingly hard to the point that I’m surprised some of the late game scores or challenges are even possible. As a long time 2D platforming fan, it all feels homey and roped me right in. Playing through for review has taken longer than it should have because I found myself spending literally hours hitting my head against one challenge or another over and over to finally complete them. Even after this review is posted, I think I’m still going to be trying for the platinum.

The gameplay is best described as a combined and spun out version of the minecart levels from the Donkey Kong Country games with a modified version of the controls from Skate. You push the left stick in a direction and release it to jump and do the four basic tricks and hold the stick in one of the four directions to grind. Add in the triggers to spin, the right stick to do grab tricks, and spinning the left stick into different combinations and you get a pretty wide set of tricks. A/X (depending on platform) is the push kick button. It’s an unusual control system that makes sense given the nature of the game. It took me nearly the first third part of the game to really get used to it but I managed to grasp it nonetheless.

Ultimately, if you are a skating or platforming fan, or you just like a stiff challenge, OlliOlli World is a must-play. It’s a good game that knows what its inspirations are and doesn’t try to be more than what it is. I can see myself coming back to it for a long time and I’m excited that we are getting such a solid start to the year.

A review code for OlliOlli World was provided by the publisher and played on the Xbox Series X. You can read SP1st and MP1st’s review and scoring policy right here.