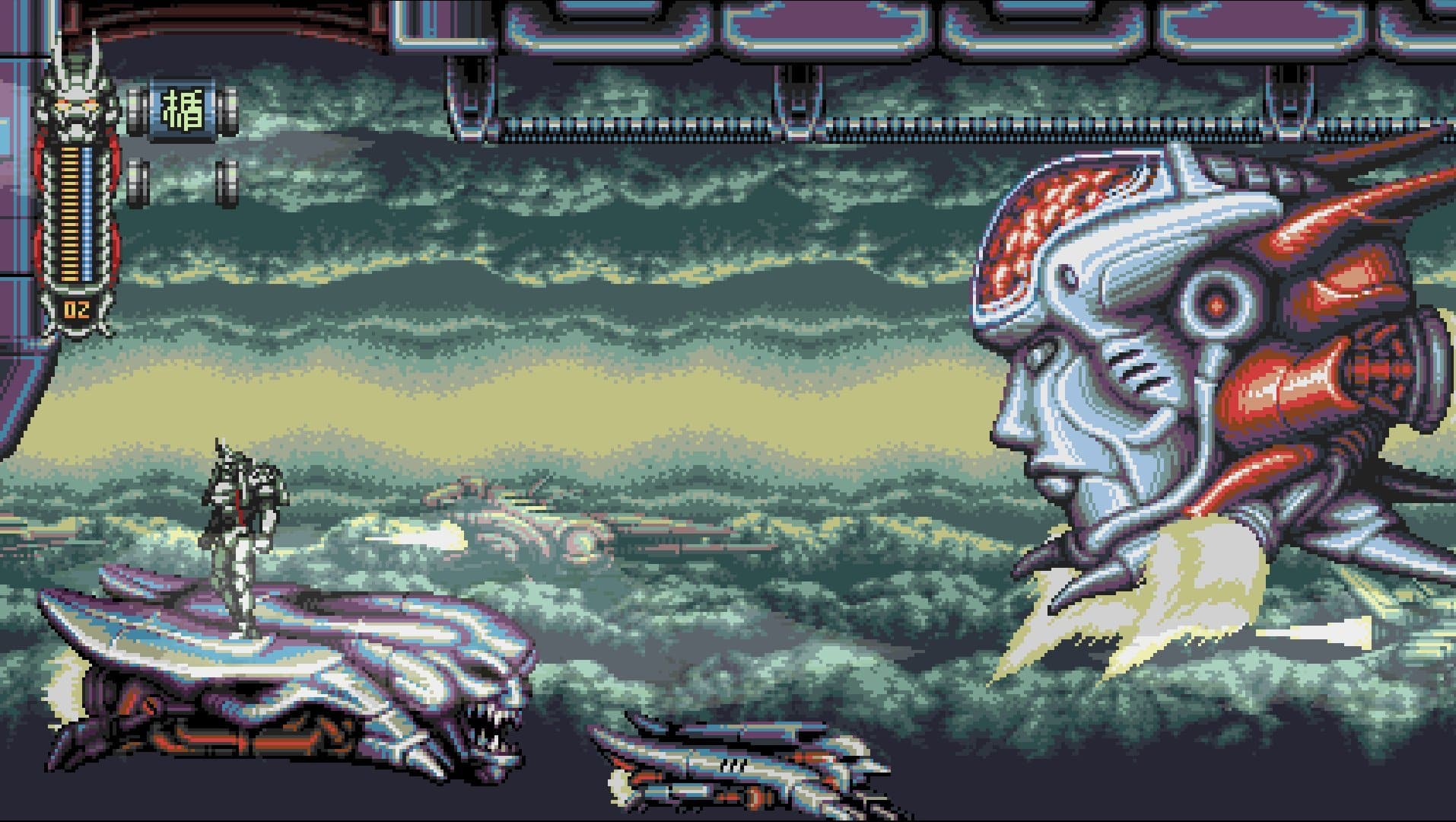 Hurriedly slapping a Metroidvania label into every action platformer game has turned into a deceiving trend. For some, Vengeful Guardian: Moonrider may fit in said category, when in fact it takes a page or two from the Strider and Shinobi books. Developer JoyMasher stays true to its identity and past works, striving for an accomplished old-school look and throwback arcade gameplay that zips along at a very fast pace. This is the kind of game that asks you to unleash your inner speedrunner and push for that record time, all within a dystopian setting with Japanese charm.

Revenge of the Cyber Ninja Warrior

Set in a totalitarian state where every whiff of resistance is deserving of capital punishment, there’s a glimpse of hope as the authoritarians release their latest weapon of oppression, the Moonrider. Contrary to expectations, this killing machine rebels against its creators and begins a journey to eliminate every super soldier. It’s a simple and effective payback plot that doesn’t get in the way of fun, with several showdowns offering some interesting moral exchanges, despite some brief Japanese voiceovers that will leave most players baffled, and the odd grammar error creeping in to break immersion just a tiny bit.

After a short tutorial to teach you the basics, Vengeful Guardian: Moonrider begins in a somewhat mild manner, as you escape the lab where you were assembled. It’s only after beating the first proper boss fight that the adventure shows its true potential, as several stages become accessible and pave the way for experimentation and discovery at your leisure.

Stages are not entirely linear either; the diversity on display is remarkably fresh and keeps the game flowing, allowing you to look elsewhere when faced by some frustrating sections. Nothing prevents you from trying a different zone to hone your skills and your character’s abilities – in the form of various chips, but also upgrades earned after defeating a boss – to later return to the level that was halting your progress. 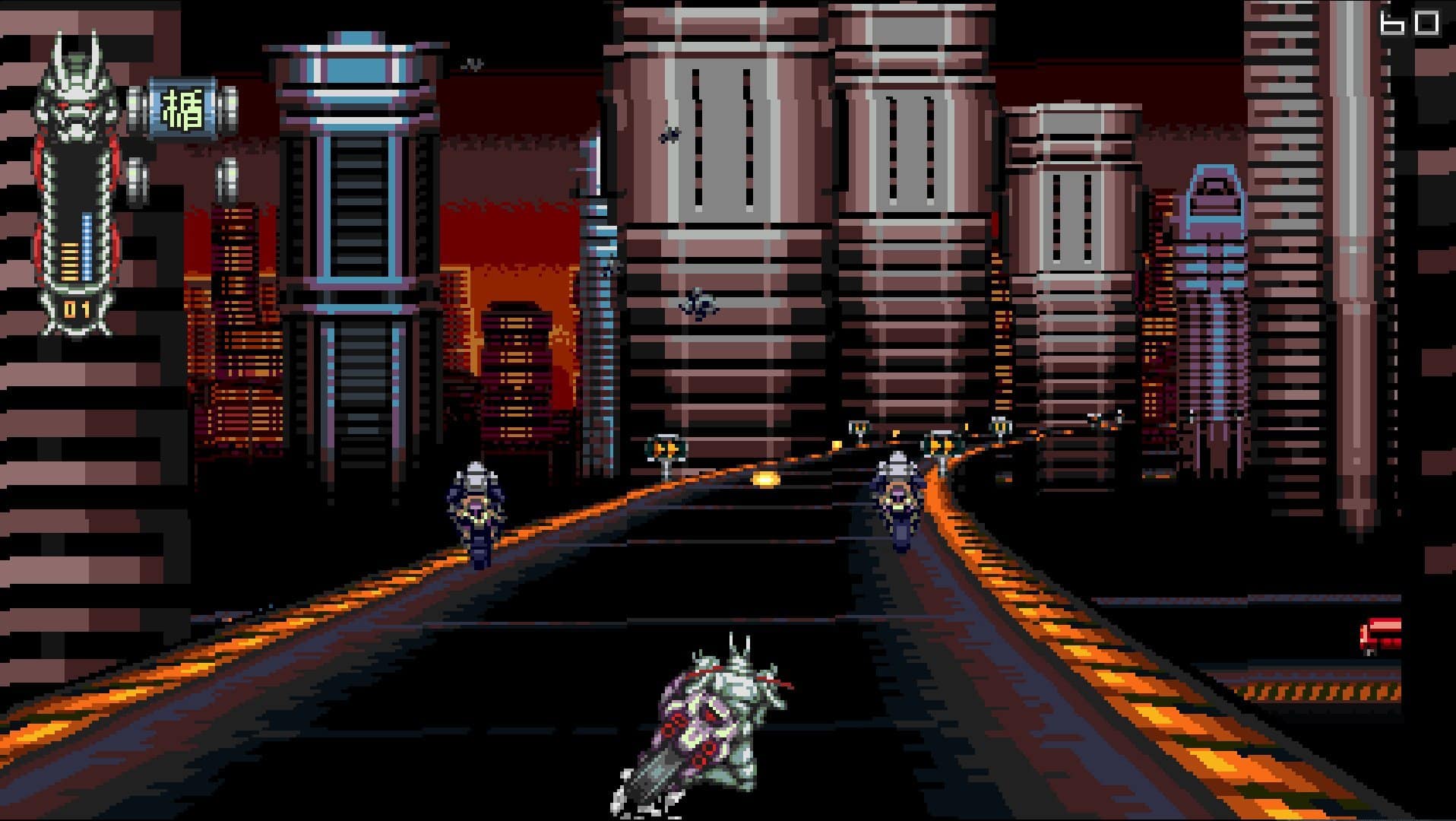 Each level comes with some sort of twist, not only due to the diverse enemy types but also thanks to new mechanics that are introduced exclusively for those areas, including a hovering platform that we can maneuver through several traps. The Fallen Ruins level has a flying mech following you throughout at a distance and firing at you, as if the main threats weren’t troubling enough.

One of the most surprising areas will turn this game on its head, as your tired feet are given due rest and replaced by a speedy motorcycle in a third-person perspective. Iwondonilo City is the level where you may fondly remember the bygone era of Super Hang-On and Road Rash, but with a neat futuristic flair and bullets, lots of them. It’s an enjoyable change of pace and gives you some breathing room from the side-scrolling sections. However, it’s impossible to ignore the way our bullets bend just as the road twists and turns, as if miraculously guided by futuristic tech; most likely, this is simply due to a stint of lazy design. Awkward oversights like these may also be considered a meaningful part of the old-school games tribute? For the sake of coherence, let’s go with a yes here.

Fast paced and primed for skillful gameplay, there’s little to reproach on Vengeful Guardian: Moonrider’s platforming sections. Learning the enemy patterns and every pitfall that comes your way is an irrefutable delight, as the level layouts are honed to keep us rushing through every obstacle, becoming second nature after a few runs. This doesn’t mean that it’s sheer brilliance all the time – some levels can be quite straightforward, but the outcome is positively solid.

It’s not an exceedingly hard game either, certainly not the Souls-like of action platformers, now that this label is also tied to almost every game posing a complicated challenge. If there’s one thing that I find lacking is the ability to lower the camera view as you crouch, giving you a better outlook on what lies below. It’s not a critical issue, as deaths by falling are few and far between – you respawn at the price of a mere unit from your health bar – but a little foreshadowing would always be better than a blind drop.

When Everything Else Fails, Spam the Boss 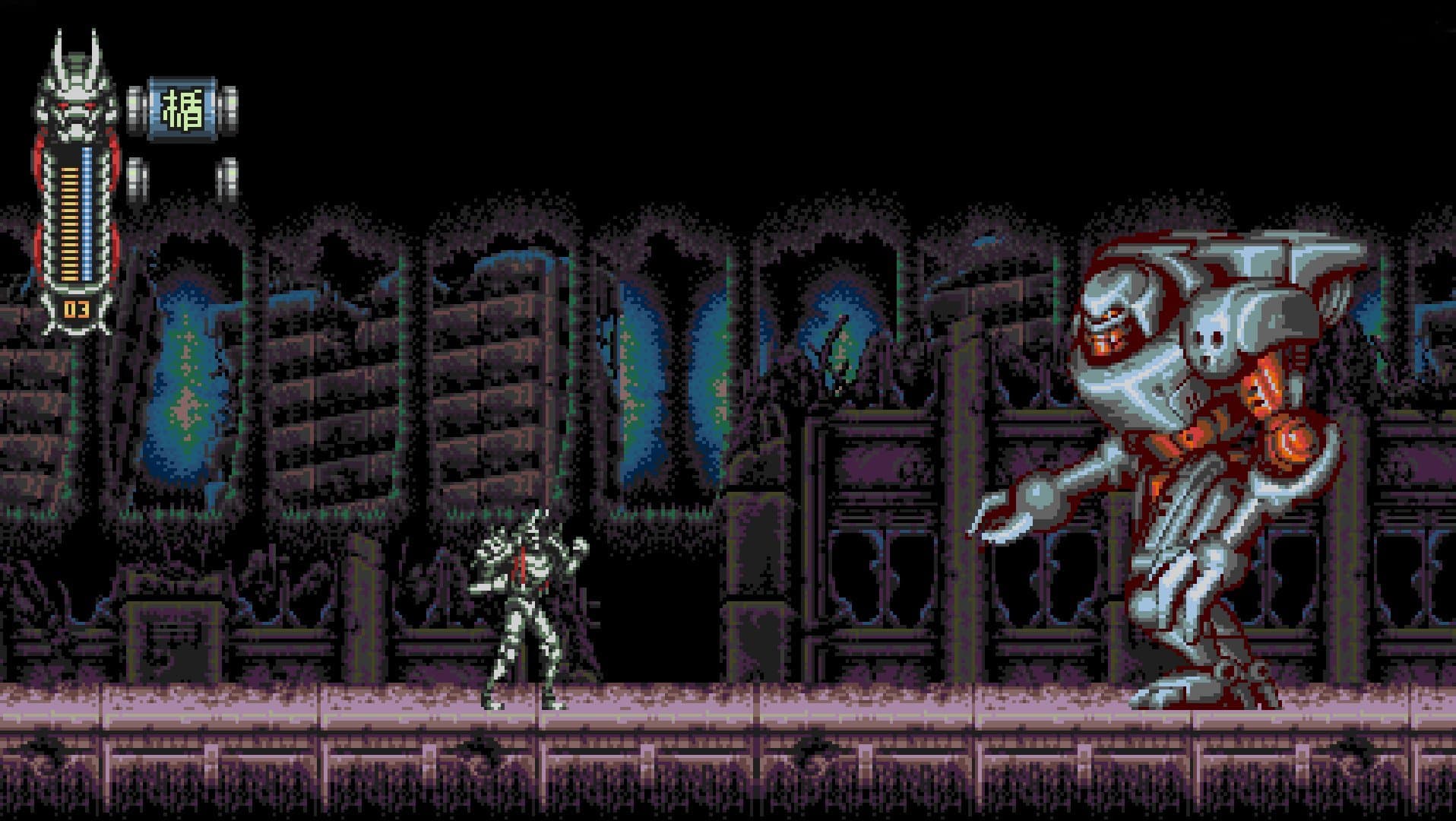 One of the best things about Vengeful Guardian: Moonrider is that you will frequently find yourself engaged in exciting showdowns, usually more than one per area. Apart from the appealing pixel art design, bosses pose a major threat that considerably varies in difficulty. Some of them are easy to eliminate after patiently learning their move set, others require expertise to deftly dodge their strikes and perfectly time our attacks. These are the key moments that you should look forward to, but not everything is ideal.

The problem is that some bosses can be entirely disregarded, as their health isn’t up to par with our abilities. Instead of flawlessly timed dodges and slashes, you can confidently sneak up on the boss and spam your hits until it crumbles. Having some easier but lengthier confrontations would be one thing; allowing you to win the fight in a few seconds by resorting to the oldest and cheapest trick in the book is another thing entirely.

The pixel art style is one of the high points in Vengeful Guardian: Moonrider, a direction that developer JoyMasher keeps on honing game after game. Although it doesn’t quite rank as a remarkable accomplishment, it’s a great aesthetic overall that will mostly please fans of 90s console games with a penchant for futuristic high-tech design with a Japanese flair. The thumping soundtrack and good sound effects round up the package, lending that extra oomph to this pure tribute to old-school classics.

Rage Against the Machines

Vengeful Guardian: Moonrider is an accomplished retro side-scrolling game delivering on fast and frantic gameplay. This is a true love letter to classic games of the 16-bit era, with slick controls and a perceptible effort to provide some much-welcome freedom of choice and range to the adventure. While its visual appeal may be somewhat confined to the so-called veteran player segment, it remains a fun and challenging experience that is ultimately designed for record-breaking and record bragging.