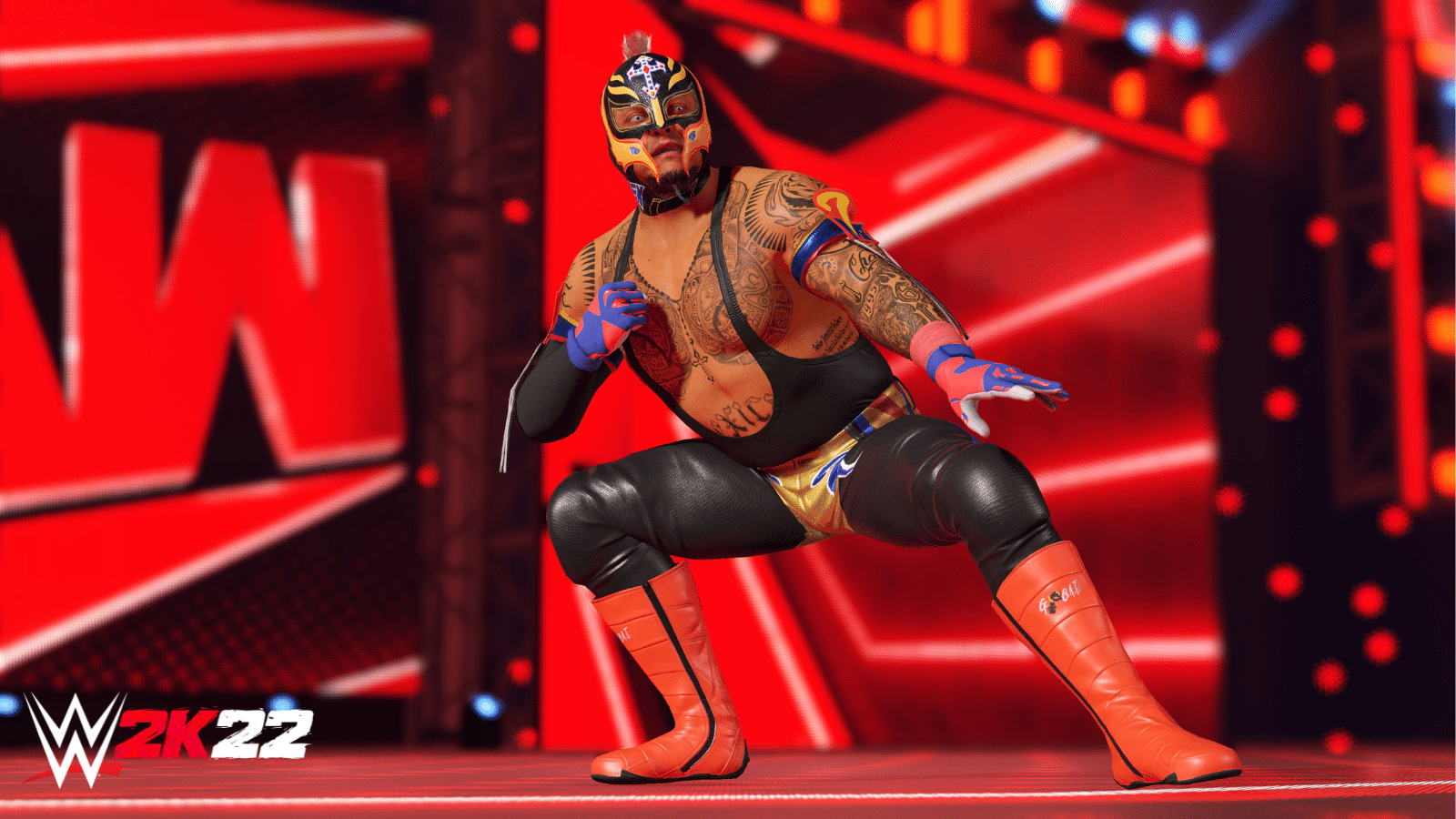 Going into WWE 2K22, I didn’t have a whole lot of hope, especially after the disastrous launch of WWE 2K20. Sure, Visual Concept was given an extra year to work on their WWE game, but being in the mindset that it’s following some sort of annual pattern with so many past releases, it’s hard to come back with something fresh and bold. Yet, that is exactly what Visual Concept has done with WWE 2K22, as the extra time has allowed them to overhaul their engine. The result? A true return to form, with perhaps some of the best combat in the series thus far.

The whole marketing behind WWE 2K22 is that “It Hits Different,” and quite honestly, it does. The gameplay, as enjoyable as some of the past entries have been, is far more accessible. Gone are the days of excessive inputs in order to pull off a maneuver. That has now been replaced with a more modern day combo system where actions only require a few inputs to chain. Hitting the punch button multiple times will result in light attacks, but throwing in a circle, or a triangle every few punches will result in a different combo. It’s easy for anyone to pick up — something that perhaps past WWE games have been guilty of not being. 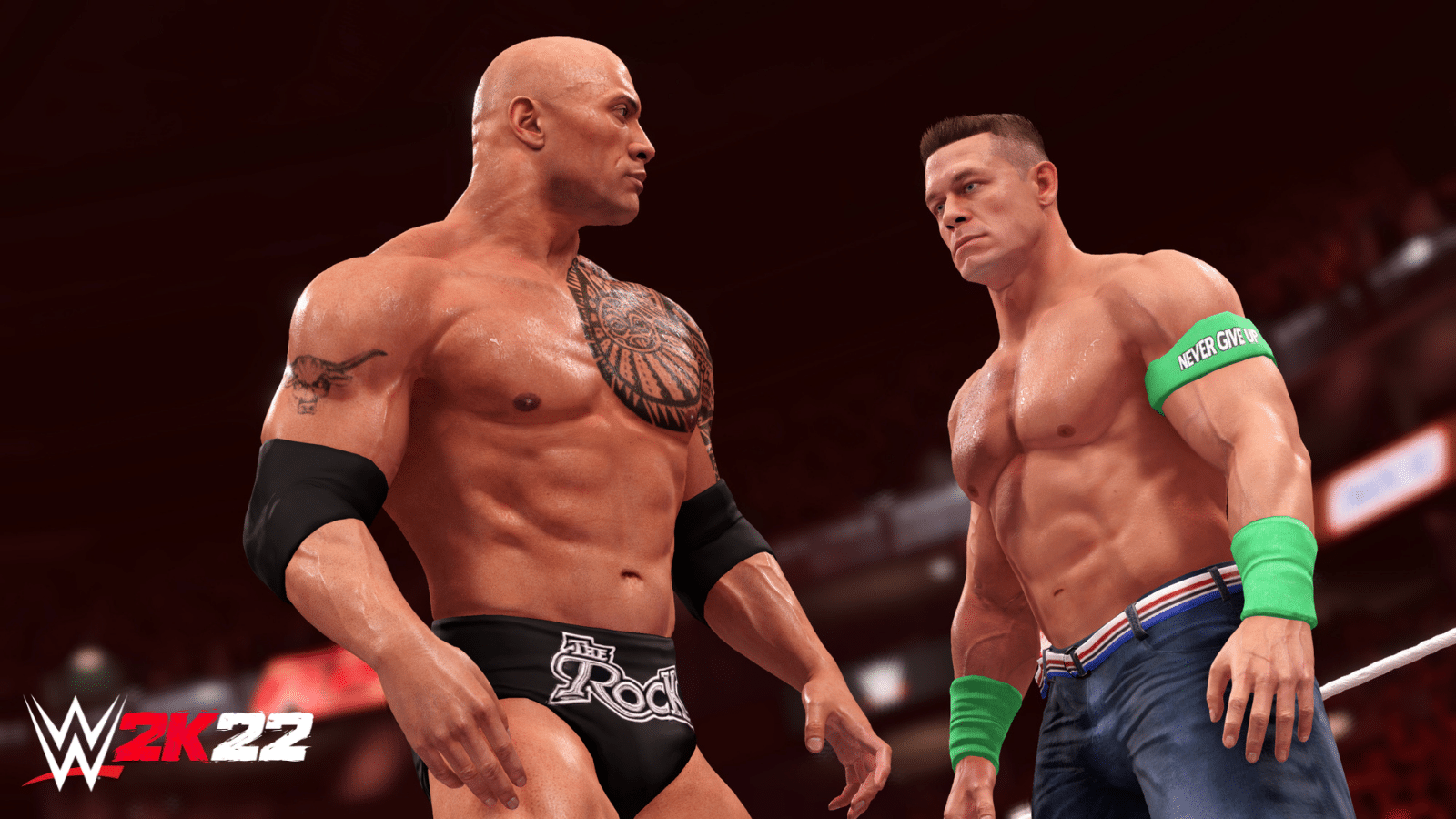 That ease of play translates to nearly every other aspect of gameplay, with grapples being easier to pull off with their distinct variations, as well as special moves being just a few simple button presses. Again, it’s a lot more accessible than previous games, though that doesn’t necessarily mean it’s a whole lot easier as the enemy AI will still put up a good fight.

Counter moves have also seen a bit of a change, though they’re more of the rock, paper, scissor form of gameplay where you need to guess which move your opponent is about to make. It’s an improvement for sure, but I’d argue that, at least for solo play, it’s a bit punishing as I found it to be mostly guesswork. It’s improved, but it can be better.

However, what is clear outside of the improved gameplay is the overall presentation, and how much more polished of an experience WWE 2K22 is. Granted it’s not perfect as I still saw some strange bugs here and there, and some performance issues, but overall I was happy with how this year’s iteration played. Combat flowed nicely, with character animations being a whole lot smoother, providing a natural look rather than the stiffness of past iterations. It is the best looking WWE 2K game to date for sure, though you should still expect to see some stiffness here and there, especially with the user generated characters. But all in all, if you are a WWE fan hoping that 2K22 can deliver on what WWE 2K20 failed to deliver, I’m happy to say, yes, yes it can.

The showcase this year is all about one of the greatest high flyer professional wrestlers to ever grace the entertainment business, Rey Mysterio. As a kid, I would watch him wrestle on the TV nearly every week just to see him soar through the air, and perform his infamous 619 signature move. He was exhilarating to watch, as at the time there was no wrestler in the WWE quite like him. Of course over the last few decades that has changed, but he will always be a fan-favorite, even if he’s been less in the spotlight compared to his early years.

So when 2K announced that he would be the featured wrestler in their returning iteration of WWE 2K, I was filled with much excitement. Sadly, however, after playing I can’t help but feel his showcase is coming all too late. 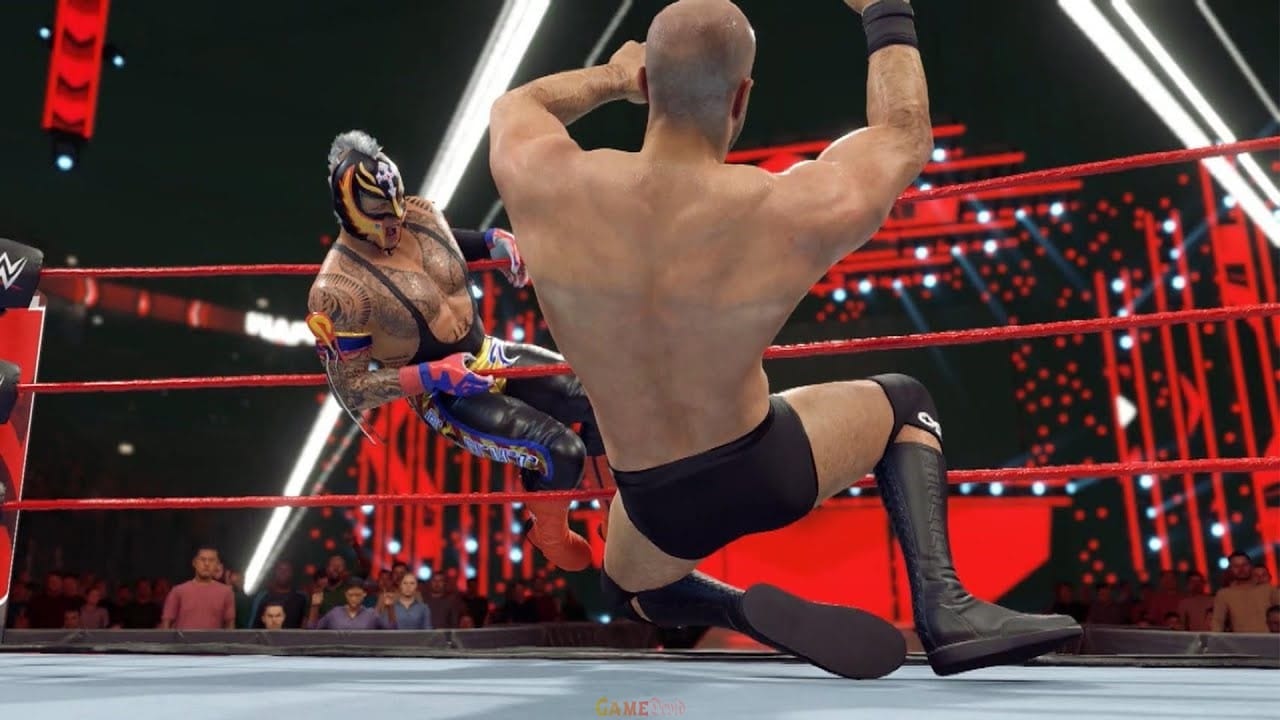 While there are notable matches, such as his excellent feud with long-time best friend Eddie Guerrero, or his old tag team partner Batista, for the most part, his showcase is lacking in a lot of major career highlights, to the point that some just feel thrown in there for the sake of not coming off weak. Rey’s big matches against other legends like Kurt Angle, Chris Jericho, and more are absent, though the reasoning is pretty clear when you look at where those wrestlers are today.

I would say that perhaps picking Rey wasn’t the best idea, as much as that pains me to say, simply due to the era he comes from and how much the WWE has changed over the decades since. What should have been a celebration of his career, ends up being somewhat of a mixed bag of matches that doesn’t feel suited to showcase a legend’s legacy.

Finally, I Can Prove That I Can Run WWE Better Than WWE’s Current Management

I’ll admit. WWE has really trailed off for me over the last few years. Now that may mostly be because I grew up in the “Attitude” era where it felt like the Wild West and anything goes, but even in this long-running PG era, I could see that a lot of the talent had been going to waste. The last few years especially, and WWE has certainly made that clear themselves as they have released a handful of both small and major talent.

The roster for WWE 2K22 reflects this, as roughly 20% of it consists of superstars no longer with the company. By no fault is that of Visual Concepts, but it does paint a bit of the picture as to what is going on over at WWE, and how many have felt that they have squandered their own opportunities.

This brings us to perhaps one of the best modes that puts us in the seat of those kind of decisions. Yup, General Manager mode is back, though with some big changes. In WWE 2K22, this mode is known as MyGM, and in it, you take the role of a General Manager and run a brand of your choice, those being Raw, Smackdown, NXT, and NXT International.

You’ll be given the selection of between 15 to 50 weeks to compete against another GM and their brand for the top spot in rating. I chose the classic Raw versus Smackdown my first time around, which promptly brought me to draft wrestlers into my brand. And although I had a budget to work with, I was able to curate my dream Raw roster.

After the draft, it was time to start putting on shows for the fans. It’s here that MyGM truly shined, as it allowed us to set up three matches per show, as well as a number of promos in between. Further, to help increase fans and revenue, better venues could be secured, as well as more advertisement, special effects, and other expenses. Whatever it was, I was in full control, as well as the kind of storylines I wanted. 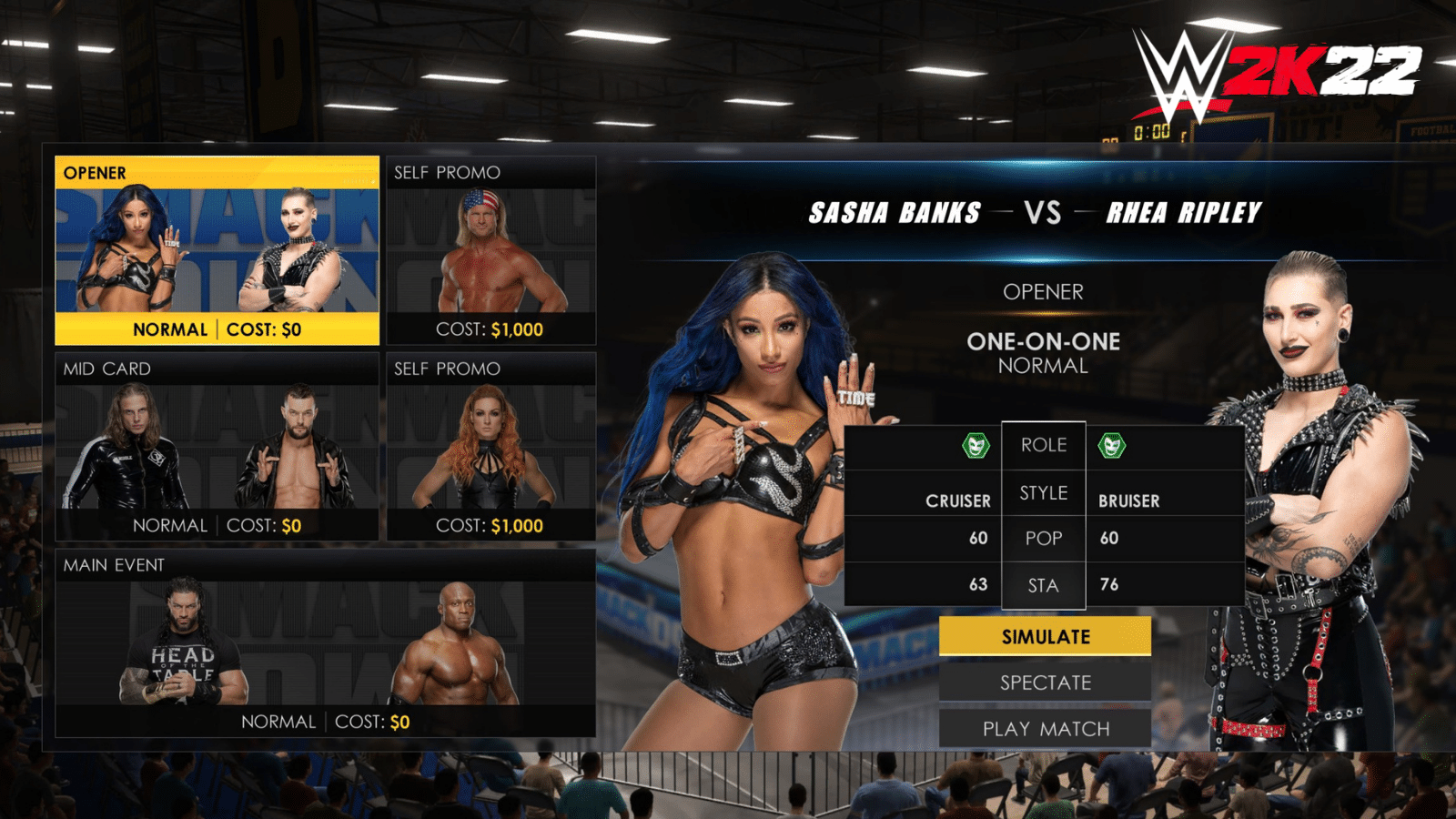 Maybe I wanted to build a rivalry between two characters, who even today have never had one. Well, that was all possible, and as I progressed through the weeks, I was able to build those dream matches up. What I especially loved is how even the stars would react, sometimes in concern for their own safety, which helped balance morality. Other times they would suggest storylines themselves, and even show off some rather questionable behavior. It blurred the line between business and personal relation, giving players a bit of a look at the inner workings of the WWE.

It’s a great mode, one that I have sunk hours into already. My only disappointment with it however is the lack of variations. You only get two championships, one for the women’s division and the other for the men. It’s odd given how many championships exists in the WWE, and even more odd that during my run some superstars would suggest tag-teaming with others, yet they could win no championship for it. What was up with that? Hopefully this gets expanded on in future updates, or iterations.

The Career mode returns once more, though this time on a much larger scale. While past iterations offered a storyline that was in a sense, linear, be that you whether created a male or female character, MyRise instead offers two completely different plot for each sex. That means double the playtime, though what is even more interesting is the fact that each story is littered with various decisions. Some big, some small, either way plenty of different outcomes that you can experience, which means plenty of reason to want to replay it later in the future.

I loved this mode a ton, being able to make my own wrestler, which by the way the editor is filled with all kinds of robust options. Sure, the superstar I made may not have looked as impressive as one of the main roster, but it was one that I made myself and not picked from a preset selection. It was tons of fun, and even more going through a full storyline with a character I created.

Not Exactly Built for Next-Gen

Having played both the PS4 and PS5 version of WWE 2K22, I have to say, I’m excited for last-gen owners, but not so much for next-gen players. As it stands, the only real benefits are better performance, and faster load times. Otherwise, unlike 2K Games’ NBA franchise which shows massive differences between last and next-gen versions, WWE 2K22 for the most part looks exactly the same between the generations.

That’s not to say that WWE 2K22 looks bad, as I think it’s a clear improvement over the last iterations, it’s just there isn’t a whole lot of excitement going for it on the PS5. It even lacks (or at least hardly noticeable) haptics and trigger effects for the DualSense, which is a bummer. Obviously if you own a next-gen console it’s best you play that native release, but being pricier, it’s a hard justification and a reason to spend more. There are even noticeable performance hitches that we saw on PS5, especially during the character creator. 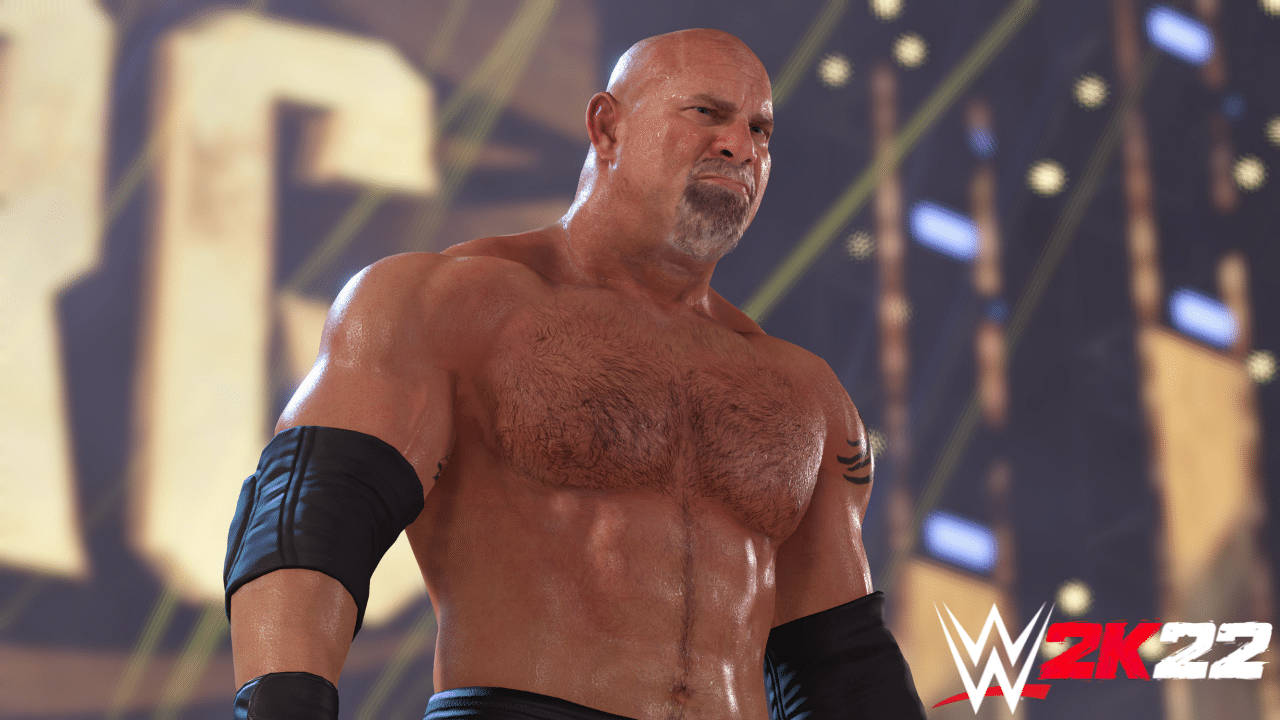 If you’re a fan of the WWE 2K franchise, then without a question you’ll be happy with what WWE 2K22 has to offer. It feels like a true return to form, and although that suggests it isn’t an evolution of some sort, it certainly has enough to shake up the franchise and for the best. It’s accessible, it’s fun, and most of all, it’s well polished in most of its gameplay. A year extra was definitely the right call, one we hope continues on with future releases.