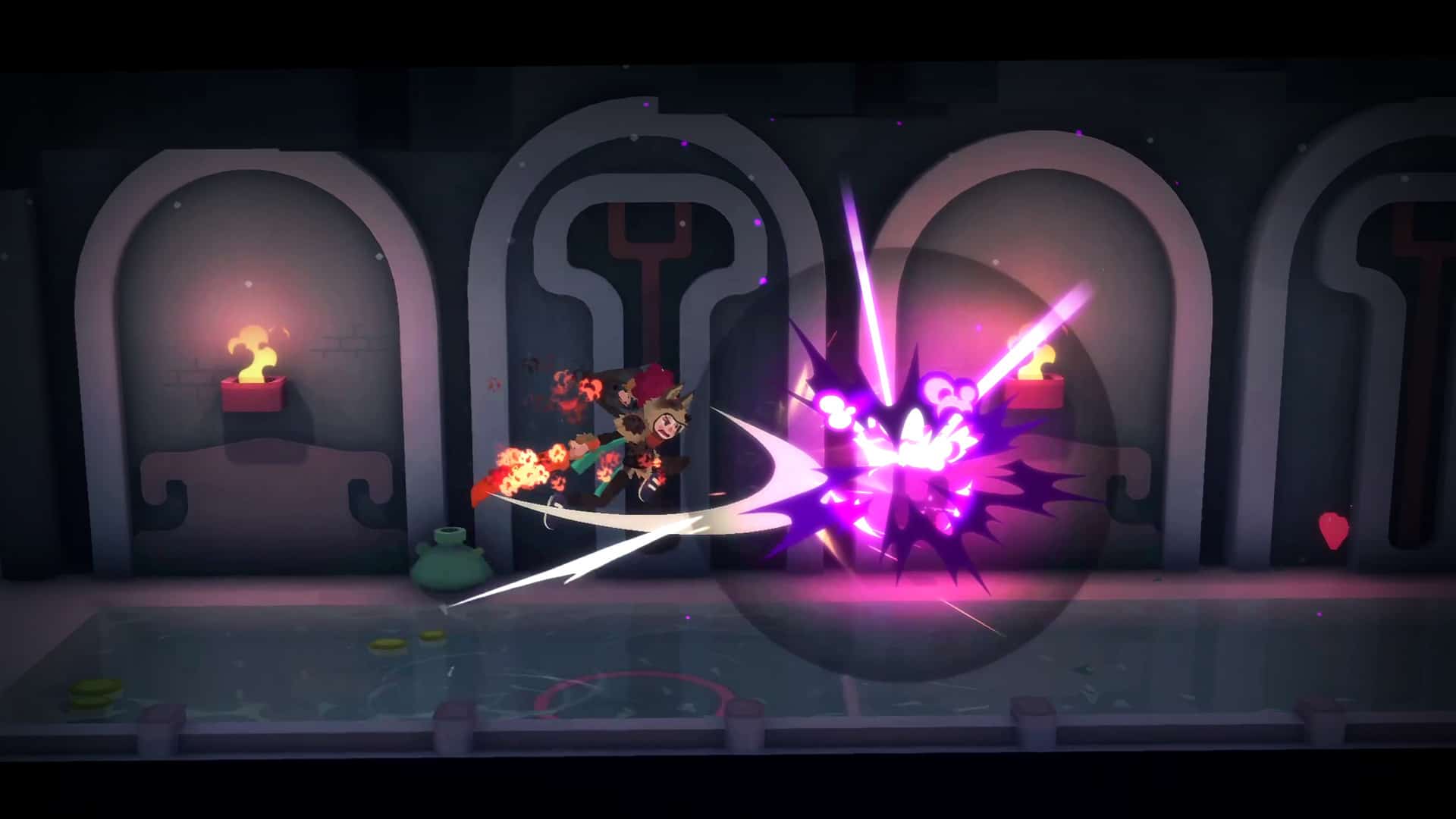 Perhaps you would be surprised to learn that Young Souls actually released back in August 2021. The reason you probably haven’t heard of it is because this 2.5D brawler by relatively unknown developer 1P2P was a Stadia exclusive, one of the few and also one of the strongest indies last year. With a picturesque art style and irreverent spunk, Young Souls combines intricate combat, flexible difficulty, co-operative play, and brisk RPG elements with a quaint but familiar story about two adopted teenagers who want to roll their eyes at adult society while saving their dad from goblinkind.

Fraternal twins Jenn and Tristan feel spectacularly out of place in the idyllic, seaside town of Portsbourgh. Adopted more than several months ago by the wizened Professor, whom they struggle to call “dad” despite desperately wanting to, the twins are forced to navigate a neighborhood which broadly views them as “ginger freaks” who skip school, curse, attempt to purchase alcohol while underage, and generally cause trouble wherever they go. (It might be because that’s actually what they do.) It’s not until they return home after a mundane errand downtown that they discover that the Professor has been kidnapped and taken prisoner in the subterranean world of gobbons (they’re just “goblins”). If you were to ask them why they would risk their lives killing gobbons for a town they barely know, for a “dad” they also barely know, they would say that it boils down to two words: “F*** them!” 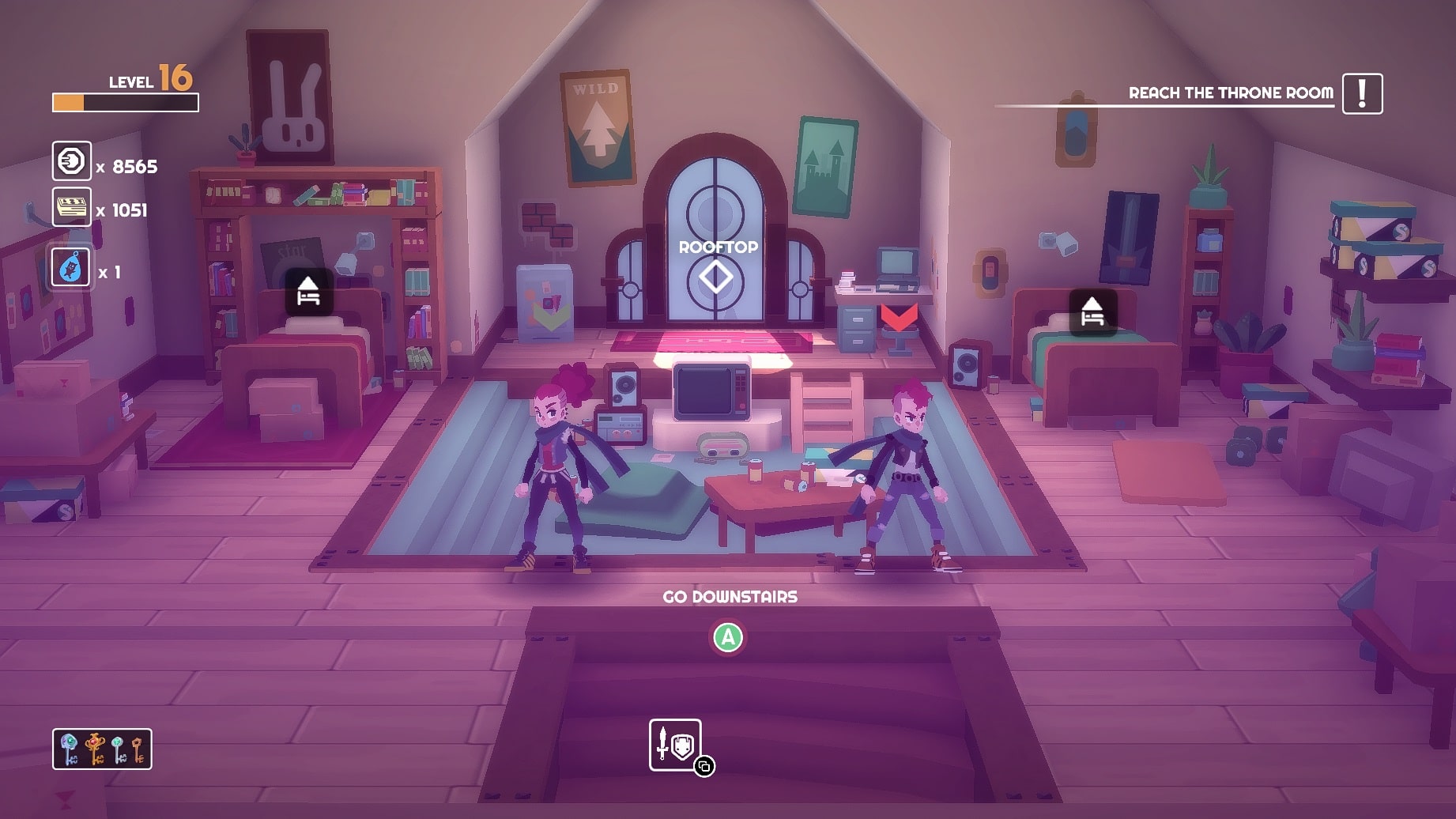 Befitting a brawler where you hack and slash waves of goblins without too much remorse, Young Souls doesn’t spend an exhausting amount of time delving deeply into their fears of rejection and loss. The protagonists are self-aware enough to understand that they’re committing mass murder on a different-skinned people. It’s justified, though, as they plan to invade and slaughter “toplanders” for taking their land away all so many years ago. When provoked, Jenn and Tristan provide short and sweet comebacks that are appropriately rebellious and flippant. While the cast of villains and NPCs are rather one-dimensional and lack any side quests that would have made them more endearing, the believable and energetic writing for the twins carries the bulk of the story’s spirit through to the end.

All beautifully drawn in an artstyle that looks like what Kurzgesagt might make if it developed a game inspired by Scott Pilgrim vs. The World, and Dungeons & Dragons: Chronicles of Mystara, the combat in Young Souls takes cues from multiple sources and blends them together with an uncanny touch. On its recommended difficulty setting, this brawler doesn’t pull any punches. You can button-mash your way through battles if you wish, drinking health potions like they’re on sale, but you will frequently get caught whiffing and be smashed across the screen. Knowing when to block, roll, or use a charged attack – all while noting your spacing and being careful not to get flanked on both sides – is key to survival, as the enemies have no trouble performing all of those same moves against you in return. 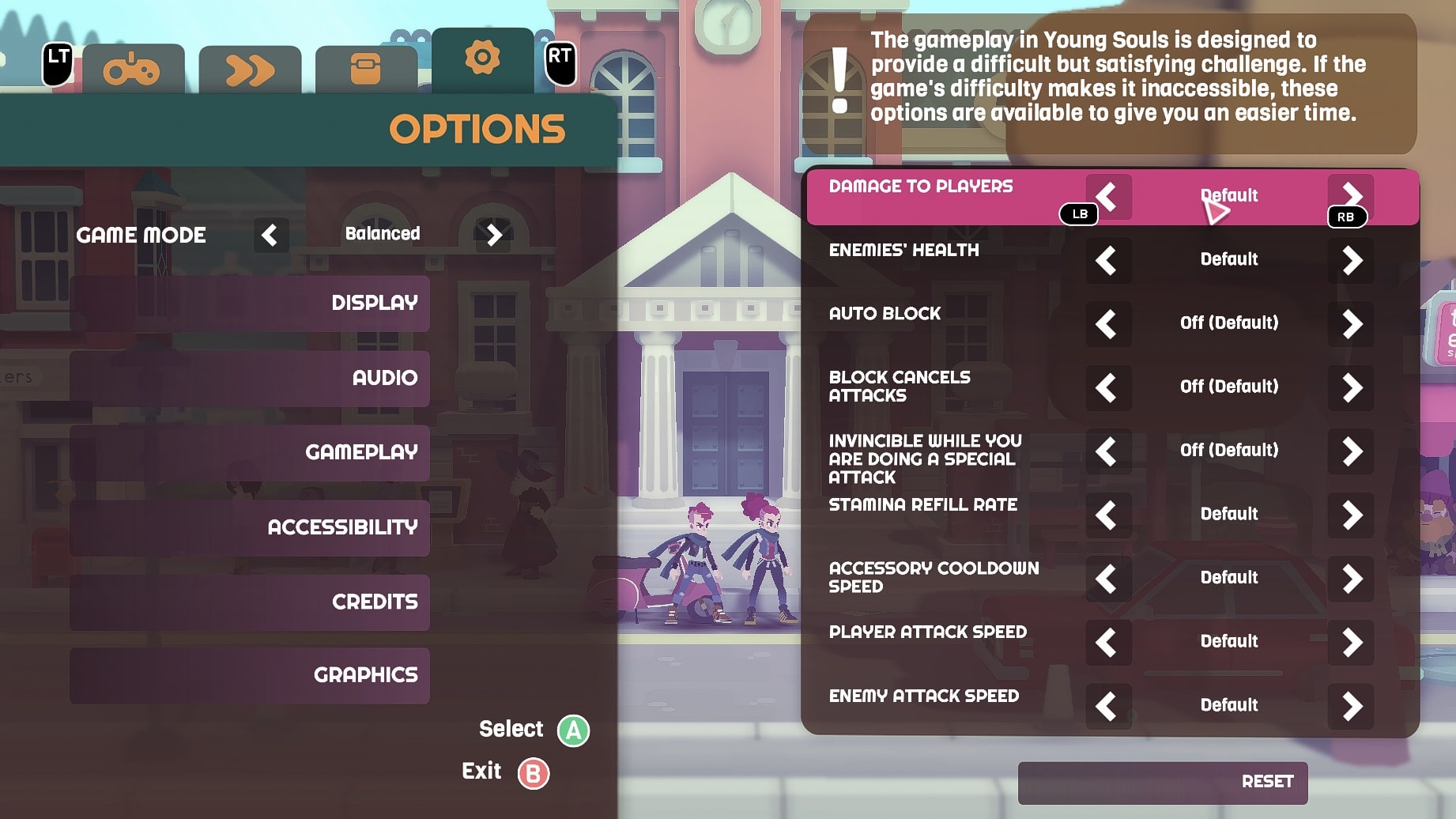 That said, Young Souls smartly includes a host of difficulty options (pictured above) for your chosen playstyle and comfort level. Those looking for hardened battles can make enemies even harder and feel incentivized to incorporate advanced techniques akin to fighting titles like rolling dash attacks, diving maneuvers, okizemes, ukemis, and parrying. Those searching instead for a breezy afternoon can turn the dial down several notches, going as far as increasing your character’s attack speed, adding invincibility frames when performing a special, and turning on auto-blocking.

Across the 10- to 12-hour adventure, the rest of the gameplay is equally as accessible and understandable without overstaying its welcome. In single-player, you can swap out the twins at any time like in Marvel vs. Capcom, complete with recoverable health; in local co-op (or Remote Play via Steam), both characters can thin out the goblin horde and protect each other’s backs. The overworld map has a simple fast travel system, and dungeons have portals that serve as checkpoint gates for quick navigation. Experience points are banked through sleeping, and on occasion, leveling up grants a token that can be used to play mini-games at the Happy Fit gym to increase stats (notably, strength). As for weapons and armor, so long as you smash every urn and crate in the gobbon underworld, you’ll have more than enough money and materials to upgrade them.

While mostly polished, Young Souls does have a handful of issues that dampen the experience. Charged attacks using a giant weapon with the “unwavering” trait, which make attacks uninterruptible, can turn boss fights into simple slugging matches so long as you have enough potions in your backpocket. Parries are somewhat inconsistent as well, to the point that it’s easier to forego shields altogether and wield a two-handed weapon instead. Also, many of the level layouts tend to use the same tilesets, so even with some traps or aesthetic differences thrown in, the environment can get tiresome and predictable. The generically flat, uninspired music for combat doesn’t help either. 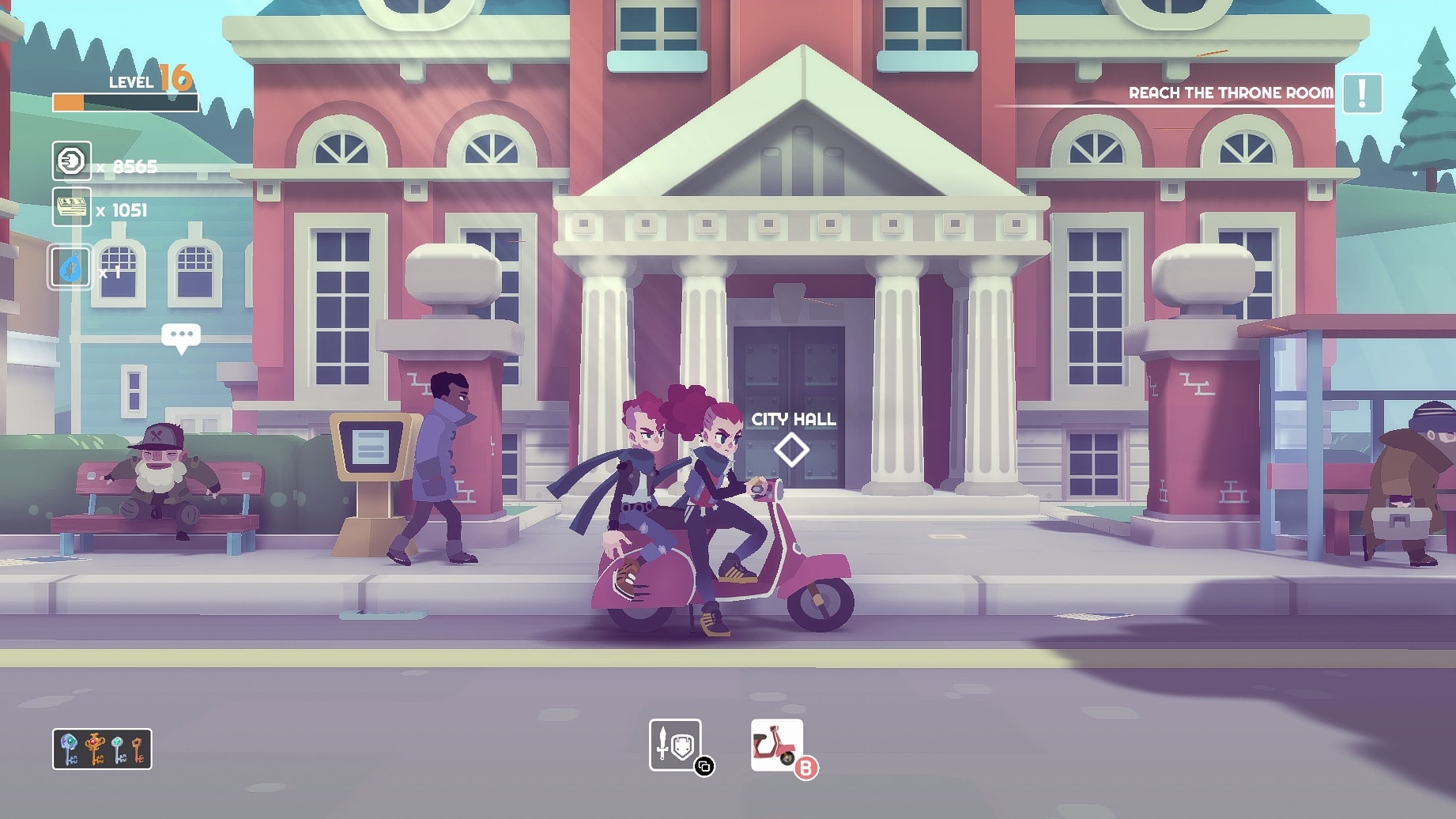 The shops for weapons and armor update their wares consistently, but since the best gear is ultimately found or earned, their options aren’t attractive. This can lead to having too much currency that is left unspent apart from purchasing more potions. The user interface has a few oddities as well, slowing down to a crawl when the equipment menu is activated and making it difficult to switch easily between headwear for combat and hats for casualwear.

Young Souls, despite several blemishes, shines as one of the strongest beat-’em-up titles in recent memory, joining the likes of Streets of Rage 4 and Castle Crashers. With accessible options for difficulty, a simple but straightforward story, local co-operative play, and challenging combat that fuses concepts from multiple genres, it provides a roadmap for how the genre can and should continue to evolve for modern audiences. With any luck, we’ll see Jenn and Tristan another time in a sequel, with double the swear words included.

A review code for Young Souls was provided by the publisher and played on Steam on PC. You can read MP1st’s review and scoring policy right here.

Stranger of Paradise Visuals Are Really Rough on Last-Gen

Call of Duty Warzone Mobile Announced, Will Be an “All-New, AAA Experience”