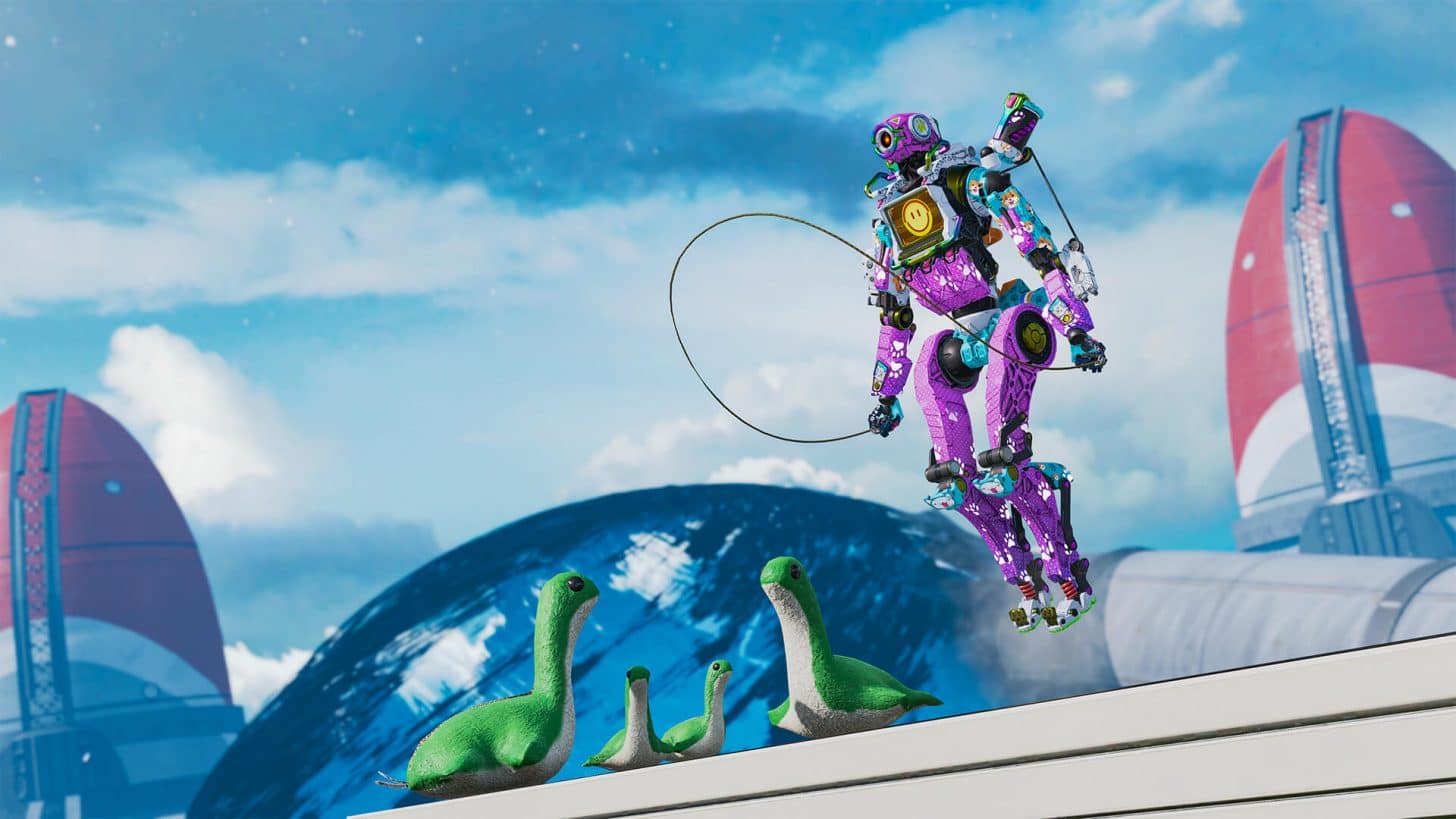 Respawn Entertainment has released the Apex Legends update 1.73 June 28 patch, which is for the Genesis Collection Event kicking off for tomorrow! While the event itself will start tomorrow, June 29, the studio has released the patch today. Head on for the full patch notes below.

Here’s a recap of what’s coming along with a more detailed explanation below. 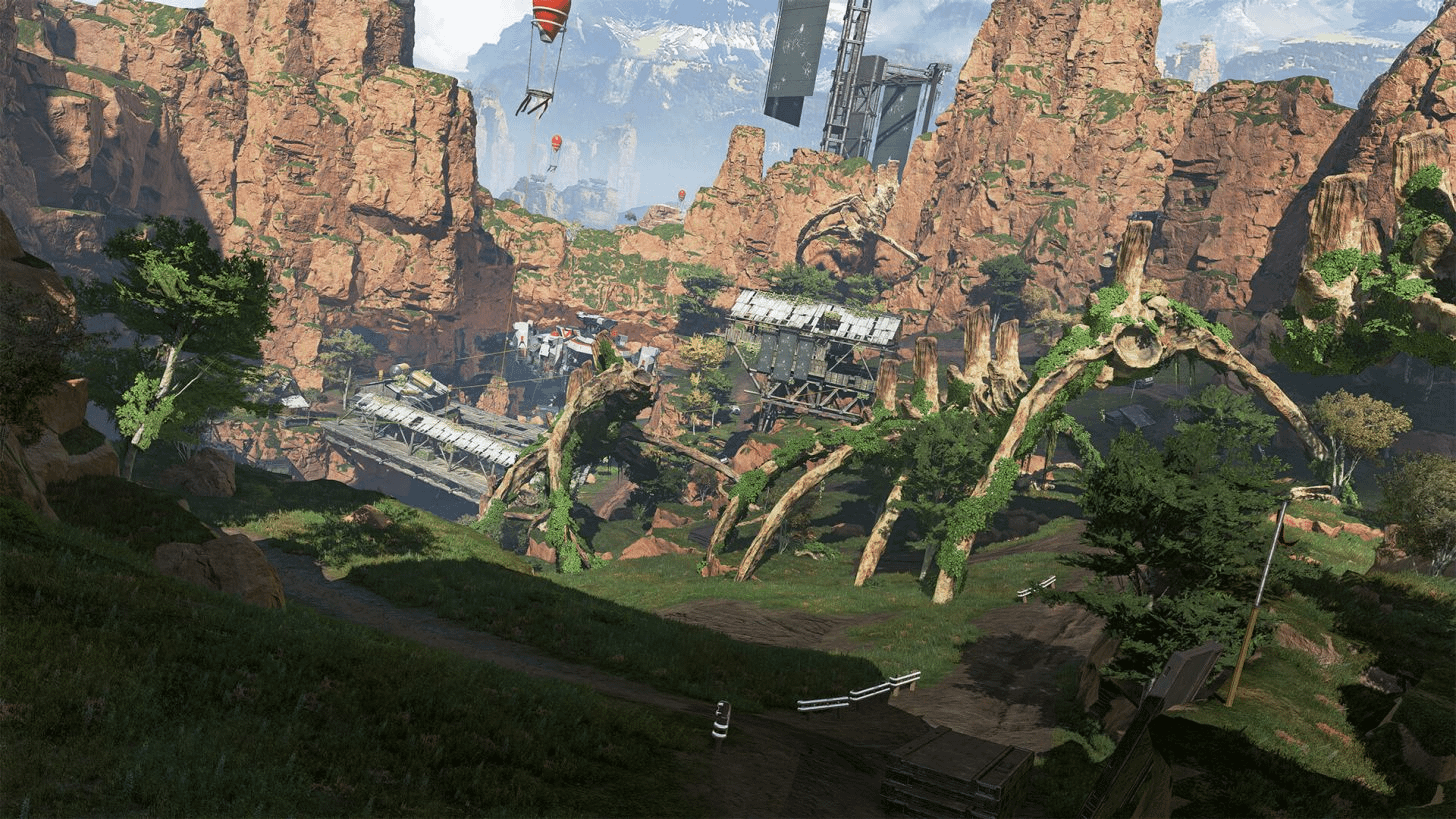 Head back to where it all started with the Legacy Maps Apex Takeover.

Season 0 Kings Canyon and Season 3 World’s Edge return for a limited time, taking over the normal Trios and Duos queues in 1 hour rotations. What better way to celebrate the Legacy of Apex Legends than to visit the first iterations of these iconic maps? 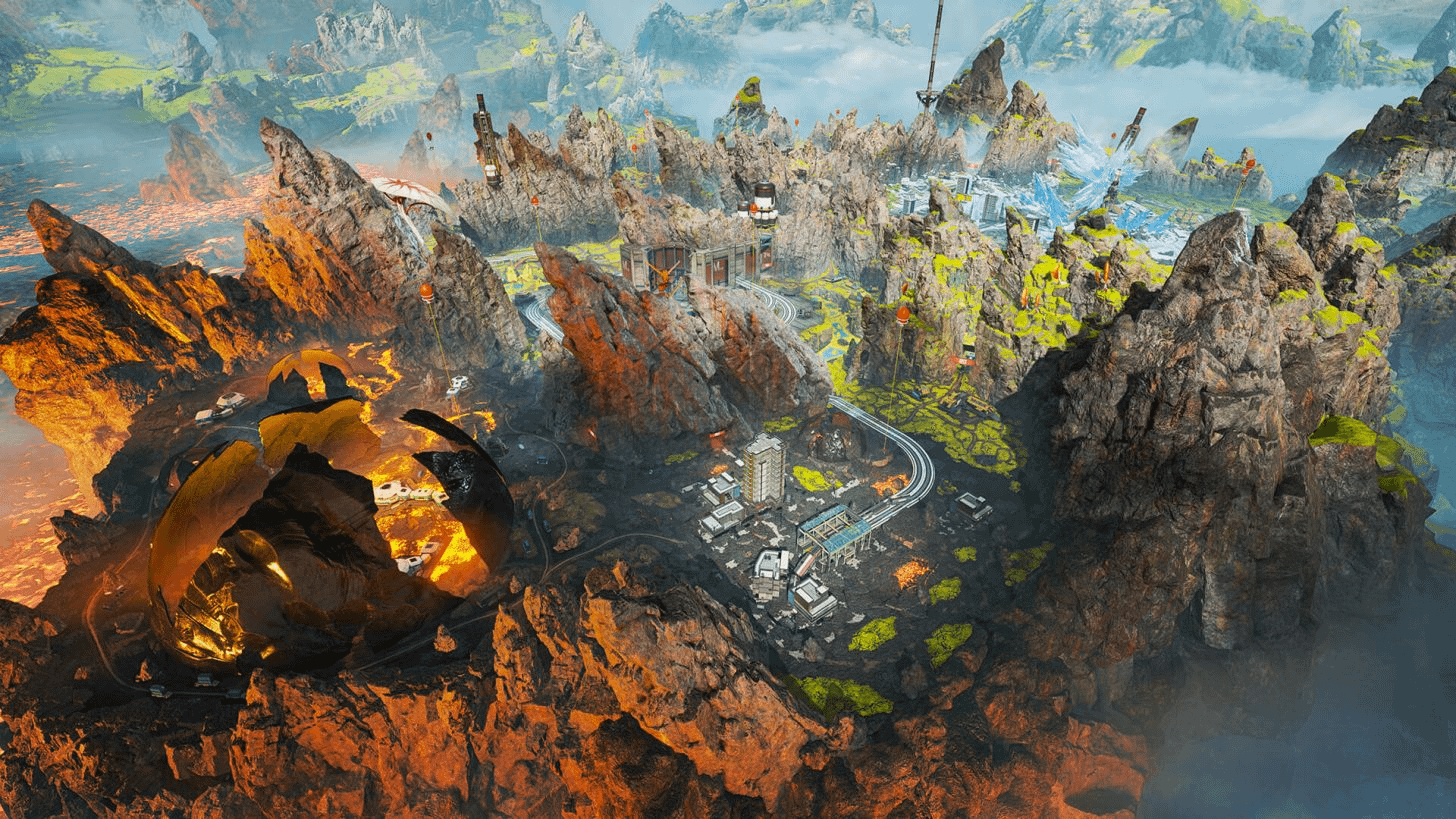 Hot drop in Kings Canyon at Skull Town (we know you will) and Thunderdome! Grab that sweet loot on the moving train as it barrels through a pristine Capital City in the era before the Harvester landed in World’s Edge. Show your new Apex friends the terror of rotating through Bridges or the epic multi-team throwdowns in Fuel Depot. It’s all coming back now, isn’t it?

We hope everyone enjoys this throwback Takeover during the Genesis Collection Event!

We heard you! Five minutes after we announced Arenas, we were seeing pleas for a Skull Town Arena. Well, here it is!

This original Apex hotzone has seen a lot of combat through the years, but this is the first time we can say it hosts a fair fight. Circle the towers as Valkyrie & Pathfinder or trap up the bottom floors as Caustic & Wattson. This location offers a wide variety of tactics and plenty of mayhem.

Skull Town will be added to the Arenas rotation in one hour increments during the Genesis Collection Event. Get in there and break some bones.

It ain’t a Collection Event without new unlockables. Let’s start with the freebies. As usual, the Genesis Collection Event brings a rewards track with all-new earnable cosmetics, this time including legendary Charge Rifle and EVA-8 weapon skins among the goodies. 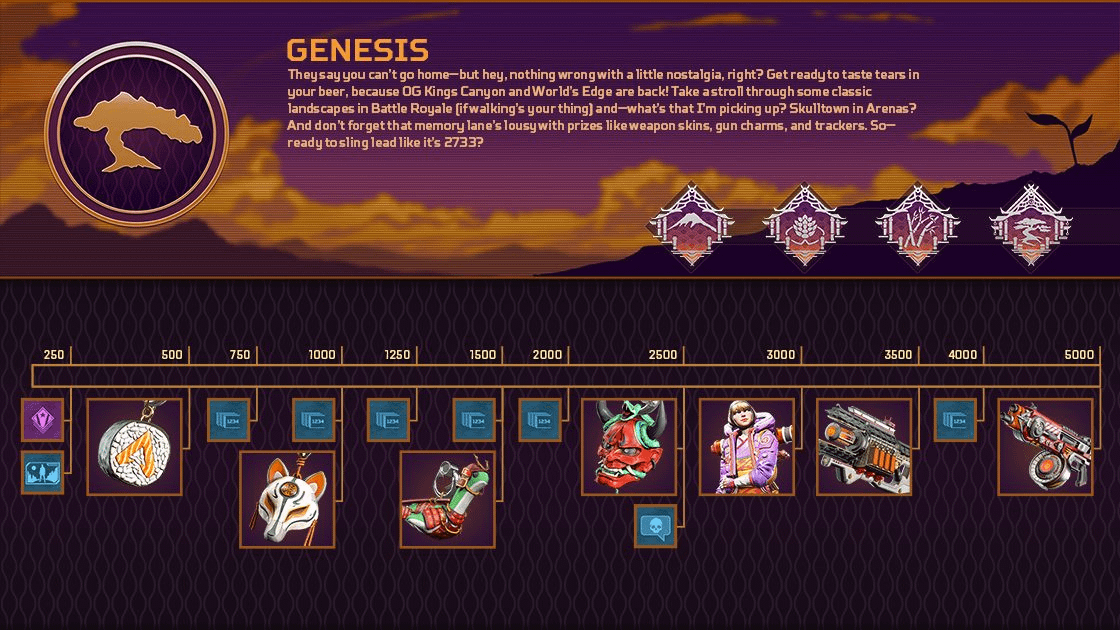 You can earn 1,600 points per day and challenges refresh daily. There are also stretch challenges that reward four unique badges if you complete them during the event. All of these challenges also stack with your Battle Pass, so you can complete multiple at once.

All 24 items will be available through direct purchase (for Apex Coins or Crafting Metals) and in Genesis Event Apex Packs for the entire duration of the event. If you collect all 24 event items, you’ll unlock the Revenant Heirloom set.

Everyone’s favorite spooky murder robot has a new toy. And good golly is it sharp.

After the Genesis Collection Event ends, the Revenant Heirloom will become available via heirloom crafting.

Each Event Pack will come with one event item and two non-event items at the following drop rates: 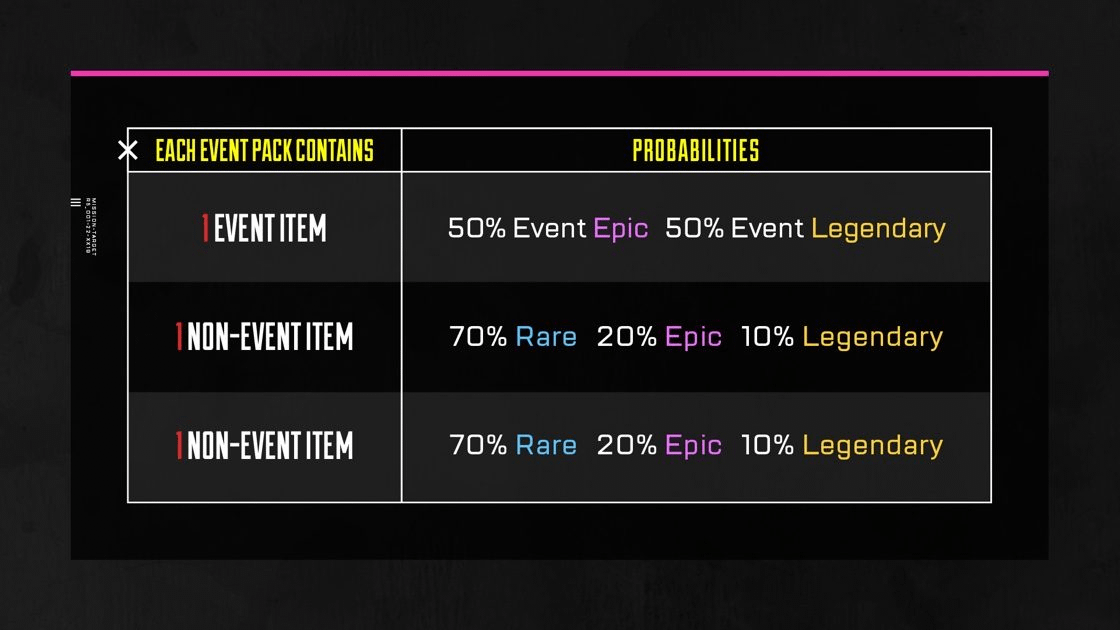 Other than that, it’s not too complicated! If you want to learn more about how Event-Limited Cosmetics work, visit our FAQ. 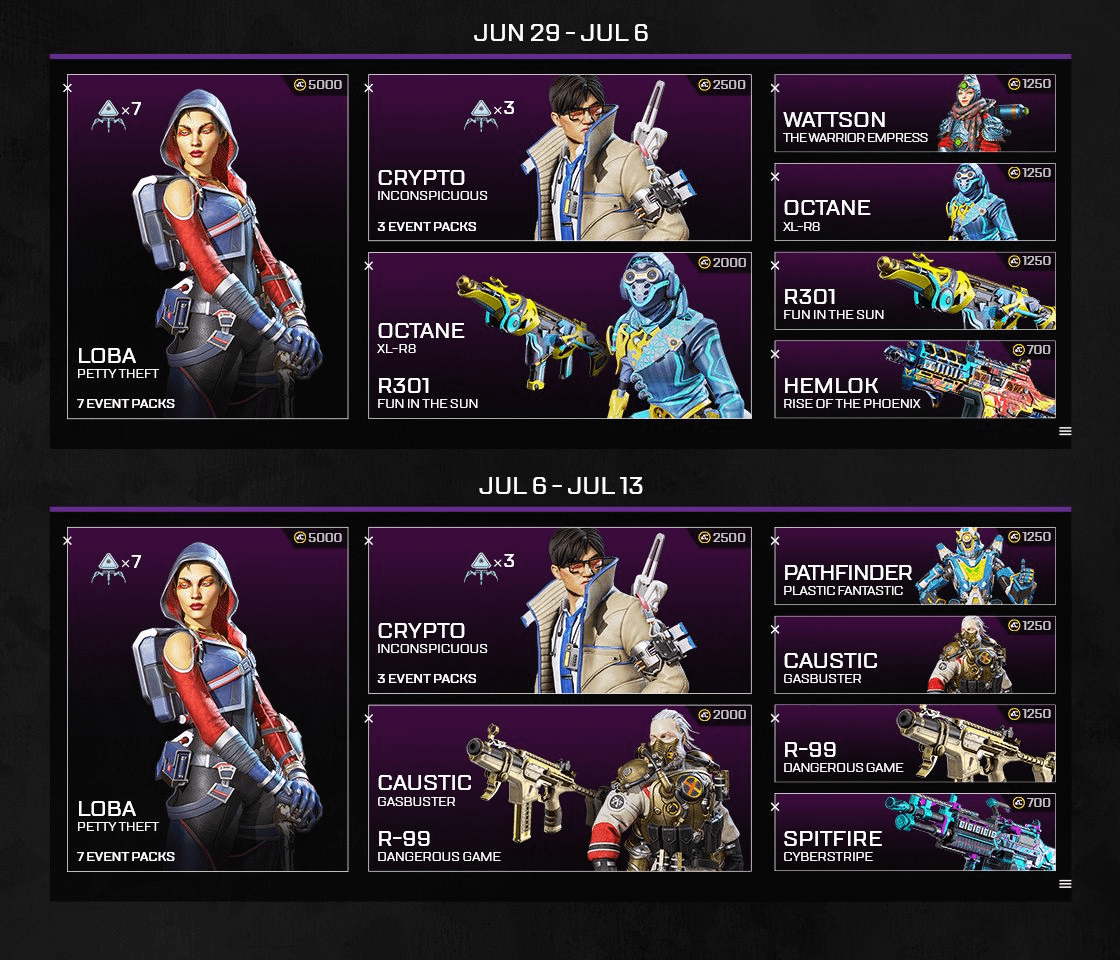 Dev Note: Octane remains the most popular legend by a large margin even after the stim nerf. Turns out jump pads are fun, but with the added utility from the two launch options, it’s only fair to bump up the cooldown.

Dev Note: Revenant’s large frame places him at a significant disadvantage in gunfights, particularly against smaller legends who no longer have Low Profile. We’re shrinking some of his hitboxes to counteract this disadvantage, while also improving his ability to climb up walls and attack from unexpected angles. (We know this can be frustrating given how silent he is, so we’ll continue to monitor and add sound if necessary.) That said, we’re taking this opportunity to reduce some of the frustration that comes when playing against his tactical and ultimate.

Dev Note: Unlike Revenant, Lifeline excels in gunfights given her small hitbox. Even with the res shield gone, it’s no surprise the smallest character in the game saw an uptick in performance with the removal of Low Profile. She remains small, but these hitbox changes bring her closer to the medium sized legends.

Dev Note: Bloodhound has remained a popular and powerful pick for multiple seasons now, mostly because of the sheer amount of information that can be gained with one tap of their tactical. Shortening the scan duration still provides a snapshot of information for Bloodhound’s team without stifling all enemies caught anywhere in the large range for a full 4 seconds.

Dev Note: There can now be up to 20 Nessies active at once on any given map. Until that cap is reached, any Wattson can place as many as she likes. When the cap is hit, the oldest Nessie belonging to the Wattson who currently owns the most Nessies is removed.

Dev Note: The Spitfire has continued to over perform so we’re hitting it’s close range hip fire accuracy which should help bring it in line.

The figures below represent changes to the cost in materials to unlock or upgrade weapons, utilities, and Legend abilities in Arenas matches.

Once another Apex Legends event is announced, we’ll be sure to let our readers know.