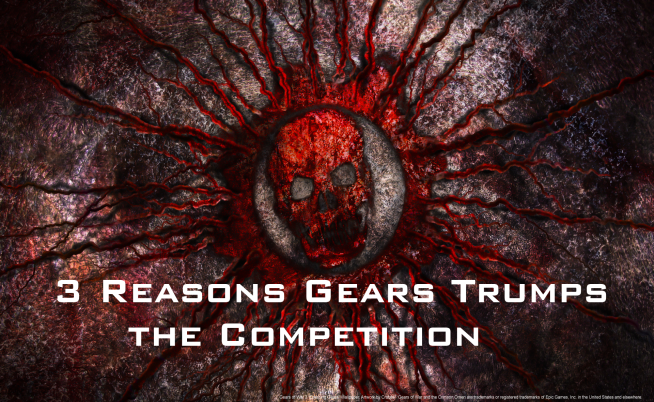 It’s a great time to be an action game fan. The market is filled (some would say saturated) with top-tier shooters, and developers and publishers have incentivized every aspect of their respective games in order to gain a foothold in the lucrative market. Currently, gamers are being inundated with a wide variety of choices when craving some online shooting fun, and a series of niches are being filled. Large-scale warfare, close-quarters-combat, modern military, and sci-fi shooters are being released seemingly weekly. If you’re on a limited budget, indecisive, or just too overwhelmed with the plethora of titles to choose from, allow me to help.

Buy Gears of War 3. It’s a better game than the other shooters currently on the market, and you have my personal guarantee that it will be better than any shooter or action game releasing this year. Call of Duty, Battlefield, or Halo might have been your favorite shooters for years, but Gears of War 3 is better. Don’t think for a second I made that claim without the evidence to back it up. Enjoy. 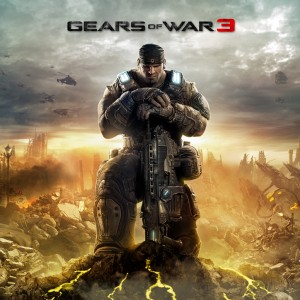 Battlefield 3 looks great, doesn’t it? DICE has incorporated a sexy new graphics engine, a more detailed destruction system, and a wealth of weapon-customization options. The vehicles are more varied, and promise to keep every match fresh and unique. It’s too bad those matches only come in 3 flavors. Yes, the online warfare in Battlefield 3 is limited to Team Deathmatch, Rush, and Conquest. It’s unfortunate that the game doesn’t include more variety, but at least it excels at what it does include. It’s also great that these modes, while limited, will be running on dedicated servers.

What about Modern Warfare 3? While the newest iteration of Call of Duty offers quite a few more game modes than Battlefield, many of the fan favorites are relegated to private matches only (Infection, GunGames, One in the Chamber, etc.), and the staple gametypes are still variations (or direct copies) of standard modes such as Team Deathmatch and Capture the Flag. Modes such as Search and Destroy give the gamer a little more variety, but the real hook is the limited respawns and improved weapon damage, not the actual objectives. Unfortunately, none of the action will be taking place on dedicated servers, and fans of the series know to expect serious lag issues, networking errors, and regularly dropped matches.

Gears of War 3. What has it got that the others don’t? Well, it has 6 competitive game modes out of the box, with each having a distinct flavor or style. Its gametypes feature both the traditional (Team Deathmatch) and the completely unique (Capture the Leader). The game also balances the level grind and unlocks very well; every few levels a new character model or weapon skin will be unlocked, and while they look varied and fun, they are cosmetic only. A veteran player will never have an advantage other than his own innate skill. It’s fun to work towards the equipment unlocks in Call of Duty and Battlefield, but it seems pretty cheap that a player would have a much more powerful weapon or more accurate scope at his disposal just because he started playing earlier. Also, akin to Battlefield, Gears of War 3 is running on dedicated servers, with no lag in sight.

Gears doesn’t stop its competitive dominance with just lag-free games and online variety. No, it also includes a feature that every multiplayer shooter should include: bots. It sucks when most of your team quits in Call of Duty, doesn’t it? You cross your fingers and hope that some people join, but there’s a good chance you’ll just get spawn-trapped, and end up with terrible stats, or quitting the match yourself. Gears of War 3 replaces any quitter with a competent bot; there is no such thing as unbalanced teams in Gears, and the feature has two added bonuses: all gametypes are playable solo against bots (for practice, or relaxation, or experience grinding), and matchmaking is much quicker due to the fact that a game that requires 10 participants can begin with less; the bots will be ousted as more players join. 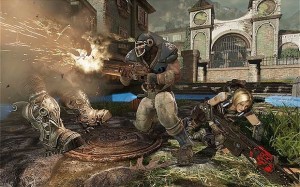 The amount of cooperative content included in Gears of War 3 is stupefying. The campaign is playable with up to three friends, and is also playable in Arcade mode, which creates an entirely unique competitive co-op experience, with players attempting to complete the game’s levels while maintaining a high score multiplayer, and garnering the best ribbons and medals. The campaign content just scratches the surface of Gears of War 3’s cooperative gameplay: Horde Mode and Beast Mode each feature unique twists on the “grinder” style of play that the series originated three years ago. A full match of Horde Mode will take anywhere from three to six hours, and is playable on any of the game’s numerous multiplayer maps. In contrast, Beast Mode is beatable in around half an hour, and offers an entirely different gameplay mechanic. Call of Duty’s developers have claimed that cooperative campaign gameplay would “take away from the experience.” I’m confused as to how. The series is known for the AI teammates it has trailing the player, so why would it matter at all if one of them was controlled by a friend?

Modern Warfare 3 does, however, feature co-op modes in Spec Ops and Survival (its own iteration of Horde Mode, after Infinity Ward nixed Treyarch’s Zombies mode). Spec Ops and Survival offer their own brand of fun, but Infinity Ward are shooting themselves in the foot by having a separate ranking system in those lobbies. Multiplayer is where it’s at with Call of Duty, and if players won’t be able to gain progress for their loadouts and unlocks in co-op, they won’t be near as enticed. Gears of War 3’s ranking, experience, and unlock system is integrated into every part of the game, no matter what mode, so players can enjoy the campaign and co-op content without worrying about falling behind their friend’s ranks. Battlefield 3 offers short cooperative missions, but they seem to exist to tick a box on the game’s cover, and not to actually engage cooperative players (the missions appear to be altered campaign missions, and do not require teamwork or cooperation in any meaningful way). 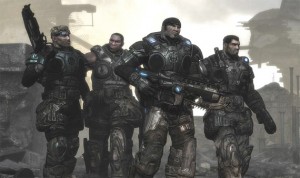 Call of Duty’s forecast calls for constant brown, with the occasional gray outline. The game’s obsession with realistic environments (odd, since they gutted the realism out of every other aspect of the game) proves to be a hindrance; the maps become interchangeable with the exception of the staple night level and the guaranteed outdoor level (Overgrown, anyone?). The avatars themselves are wrapped in gray, brown, or gray-brown garb, and are indistinct from one another.

Gears of War 3’s maps offer supreme variety. Trenches harkens back to classic shooter maps of the late 90’s, when Epic were still honing their skills. Sandbar looks as if it were ripped straight from Uncharted series, and displays some amazing environmental texture and lighting work. The newly revamped Gridlock features enough spooky atmosphere, wispy smoke, and dead trees to fill a Tim Burton film. In Checkout, players navigate an abandoned grocery store, hiding behind old cereal shelves, with the dawn’s light pouring in through the rusted ceiling. The characters and skins are varied, with stock avatars from the campaign running alongside unique variants from past titles.

Is Gears of War 3 the best shooter ever developed? It’s hard to say; it’s definitely in the running. But while its merits have yet to be set in stone, it’s clear that it offers more bang for the proverbial buck than its direct competition this year. Buy what makes you happy, and play what you want to play. If you’re stuck on the fence? Purchase Gears of War 3. You won’t be sorry, no matter what kind of online experience you’re looking for.

AAA Games: What They Have in Budget, They Lack in Creativity