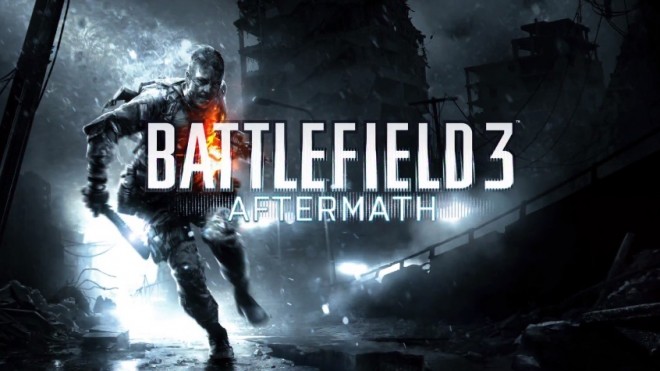 If it’s not through some serious patching, it’s the via the exceptional downloadable content conjured up by the folks over at Digital Illusions CE. Battlefield 3: Aftermath is no different. Well, different in one small aspect: It is the best Battlefield 3 expansion pack to date.

Aftermath takes the best of what made Back to Karkand’s gameplay so enjoyable, but adds its own little twist and shakes things up with a “groundbreaking” theme, new weapons, new vehicles, new character skins, and new ways to play Battlefield 3.

New weapons, you say? Well, sort of. More like an extreme modification of your basic assault rifle. Aftermath introduces the Crossbow, or XBow, to Battlefield 3’s arsenal of tools. Unlocked via in-game assignments, the XBow comes in two forms; a close to medium range setup with the Kobra Sight optical attachment, or a medium to long range set up with the 7X rifle scope. Each variation can utilize up to four different types of XBow bolts that can be toggled in-game, also unlocked through in-game achievements. The Standard Bolt acts very much like a shotgun slug with significant “bullet drop.” On the opposite end of the spectrum, you have the Balanced Bolt which acts much like a sniper round: one-shot kill to the head with heavy damage to the body and almost no “bullet drop.” The more specialized Heavy Explosive Bolt will damage vehicles much like an RPG while the Scan Bolt will help you detect enemy locations. But what the Xbow really introduces to Battlefield 3 are new gameplay opportunities. At last, the Recon class has a dedicated explosive tool while the Engineer now has access to long-range fire power, for example. This allows you to mix and match class abilities to better suit certain situations. Most importantly, it’s a fun weapon to use. While you might not rack up mountains of kills with it, the challenge of wielding such a specialized weapon can be exciting.

For more on the XBow, I’d like to refer you to this in-depth guide for some serious details about how each different bolt type works.


Moving on to vehicles, Aftermath introduces three new toys to play with; The “Phoenix” and “Barsuk,” both modified jeeps with mounted grenade launchers and HMGs; as well as the devastating “Rhino,” a rusty, broken-down van. All sarcasm aside, the Rhino does pack quite a punch with a remote-operated turret and open passenger seats allowing for some deadly drive-by shootings. Though all three vehicles are mere transport vehicles in actuality, each one has been heavily modified and retrofitted for intense vehicle combat. These guys mean business.

Now, you might wonder, why modify such vehicles in the first place? That’s where Aftermath’s post-earthquake theme comes in. Having just survived some serious earthquake carnage, American and Russian soldiers are left with nothing. Trying their best to survive, and yet fight off the opposition at the same time, these soldiers must use their imaginations to scrounge up what remains and craft some entirely new killing tools. That’s also where the XBow comes in. This theme also extends to character skins, which now depicts bloodied and bruised soldiers looking as if the’ve seen better days. The biggest way the aftermath of this quake effects this DLC’s gameplay manifests itself in the new game mode, Scavenger.

Scavenger starts you off with nothing but a pistol, a knife, and one grenade. Your job is to capture various flag points, much like Close Quarter’s Conquest Domination. Pretty hard to do with only a pistol, right? That’s why you need to search the battlefield for higher-powered weapon pick-ups. The safe, dark corners of the map will house your weaker personal defense weapons while searching those deadly, high-traffic hot spots will reward you with some more serious firepower. The other “stick-in-the-wheel” is the fact that not every weapon pick-up equips you with massive amounts of ammunition. Chances are, you might get only one good magazine-worth of bullets before you need to find another weapon. It ads a fun twist to the standard Domination mode and keeps the action constant, considering less time is spent choosing or modifying your loadouts. It’s also a nod to more traditional, arena-style shooters which keep everyone on an even playing field. I predict many finding a love-hate relationship with this mode. Those who just want to stick to ranking up their favorite weapons may want to skip this mode entirely. Those looking for an even fight with an added level of strategy may find themselves at home here. Oddly enough, “even” is a funny word to use considering how uneven the terrain is in these new maps. 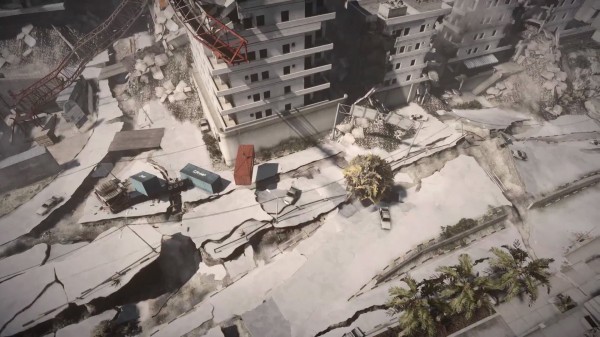 A bird’s eye view of the earthquake-ravaged Epicenter

Thanks to some intense tectonic rumblings, Aftermath’s maps have you fighting it out on a battlefield you might not be so used to. Take, for example, Epicenter, where these effects are most devastating. Random tremors shake up the battlefield every so often and getting caught in the path of falling rubble won’t end so well for most players. They’re nice in that they up the level of immersion, especially thanks to DICE’s superb sound design. I only wish they were actually stronger and effected the battlefield even more so. Also, driving down the street in a Phoenix or Barsuk can be a b*tch thanks to gigantic seismic fissures cracking open the highways and roads. In turn, this also provides infantry with more cover than normal. Heavily destroyed buildings which act as center pieces in maps like Azadi Palace and Markaz Monolith offer much more vertical gameplay than you might be used to as well. It’s also quite impressive, visually, to see such humungous structures ruined and crumbled as players battle in and around it. Talah Market, probably the most close quarters-based map of the four, seems least effected by the the quake, but still provides a different enough experience than other Battlefield 3 maps to make it stand out.

All four maps play similar to the urban environments found in Back to Karkand (minus Wake Island) and are most heavily suited to extremely satisfying games of Conquest, Team Deathmatch and of course, Scavenger. For the most part, all four maps seem to be built in a circular fashion (but in a square shape, if you catch my drift). Each one is outlined by a more open, outer-ring where much of the vehicular combat possibly takes place, but as you move towards the center, things get busier and the infantry fighting becomes more intense. I feel DICE struck a very satisfying balance here between the two styles of combat, as they did in Back to Karkand, which are tried-and-true Battlefield maps in the first place. I also found Team Deathmatch to be quite enjoyable. Built in the same fashion, TDM features a portion of each map (a rather large portion, actually) that also provide close quarters experiences near their centers, sometimes boasting a ton of vertical gameplay, but are usually surrounded by open roads or pathways providing some useful flanking routes. The same applies to Scavenger, of course. 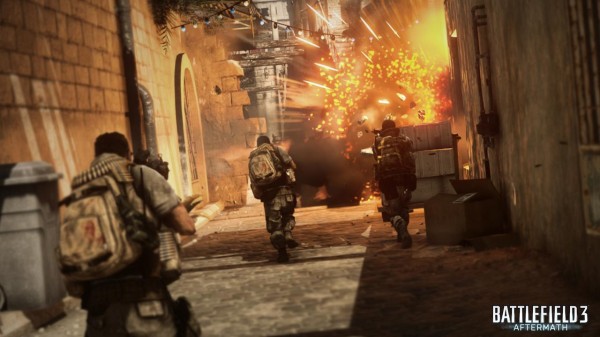 Fighting in the streets of Talah Market

Built-in shortcuts help you traverse through the hectic battles that take place closer to the center of each map. It also renders most players’ paths unpredictable as they could pop-up behind you at any moment. It keeps you on your toes and paying attention to your surroundings. You’ll also finally be able to say goodbye to the blue tint that has been laid over top all previous Battlefield 3 maps. Instead, say hello to orange. It’s effective in that it give this DLC a different visual flavor, though it may seem rather excessive in maps like Markaz Monolith. I found Epicenter in particular brought back memories of Oasis from Battlefield: Bad Company 1 and 2 thanks to its “dry” look and numerous palm trees. On a graphical level, I don’t find any of Afthermath’s maps as appealing as Armored Kill’s, but they sure play better, especially on consoles, and that’s what counts.

If you happen to be a console player, this DLC is a must, especially if Armored Kill’s slow gameplay on empty but beautiful maps left a sour taste in your mouth. In general, Aftermath hits a sweet-spot in Battlefield 3’s gameplay and offers enough new content to breathe some extra life in game that may seem “over-the-hill” in terms of age. Additionally, this expansion offers five brand new dog tags on top of the five related to XBow unlocks, as well as another five achievements or trophies for Xbox 360 and PS3 users.

There’s not a lot to dislike here, so I’m giving Battlefield 3: Aftermath a full five-star ranking. If you happen to be a Battlefield 3 Premium member, then you’ll be downloading this expansion pack regardless. For those who have yet to join in on the fun and are selective about their DLC pickings, this is the one to get.

Aftermath is a whole new experience that keeps in-line with the spirit of Battlefield with a fantastic balance of vehicle and infantry combat on some of the most well designed maps we’ve seen so far.