This article is more of a message to Treyarch and a place to collect your feedback for them than it is a “hey, this is what I think” article.  So if you could, please do us a favor and leave a comment and share this with Treyarch!

It’s almost ironic that something as critical and assumed-to-be-perfected-pre-launch as connectivity via online networking has been such a significant issue for Black Ops II and Call of Duty in general.  In my previous article/video, I discussed why I feel these “lag” issues exist, so I’ll just link you to that here rather than repeat myself.  I will say though that the point of the article wasn’t to blame “lag comp” for all of BOII’s problems.  I wrote that article as a suggestion that maybe some of the advanced features (theater mode, etc.) implemented in BO1, MW3, and BOII are more to blame then bad network design for the issues in the recent COD titles.  Considering we didn’t have such extreme connection-related issues in past CODs, it might be food for thought to consider the additions the more recent CODs have acquired.

The way a typical night of BOII while playing with my friends (when the game plays at its worst) goes down is that I struggle to win every gunfight and lose the ones where I don’t get a crazy headstart in shooting.  I discovered this fourm post recently, which might provide some insight into why my connection seems to improve slightly when I play by myself, assuming of course it’s even remotely accurate.

Playing on my own, however, is even more frustrating despite the mild improvement in connectivity.

Despite the fact that I sometimes do exceptionally well (in League Play I might add): 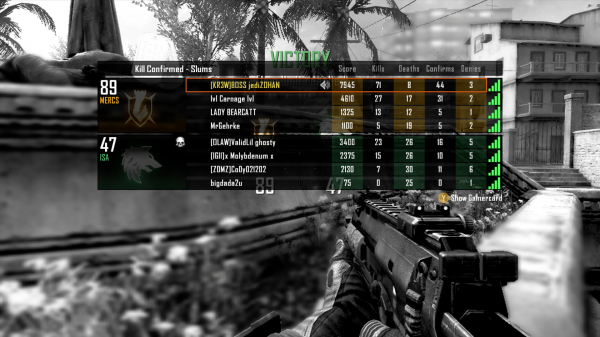 More often than not, it feels like I’m carrying my entire team and still getting destroyed: 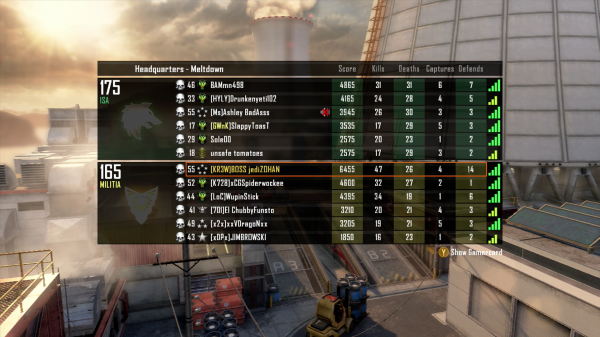 As much as I like skill based matchmaking, I feel like it shouldn’t be a factor in public lobbies.  I’m not always interested in playing against good players.  The randomness of players is part of what makes public lobbies so much fun.  Considering Treyarch included an entire set of separate competitive playlists, I really don’t understand why they implemented SKBM in public lobbies.

Lastly, I’d like to direct your attention to this video:

Now, I’m not suggesting that the spawn system in BOII is broken.  CTF spawns, especially on small maps, are very fixed.  But I think the footage clearly demonstrates an issue that needs to be addressed.  Generally speaking, the smaller the maps become the less space the spawn system has to work with.  Bad spawns are more a byproduct of map size than spawn logic most of the time.

If the above issues are addressed and fixed, it’s my opinion that BOII might just be the best COD ever made.  But oh how thin a line it walks.

So readers and Treyarch, I leave it to you to continue this discussion and maybe get something about BOII’s problems done.

Be sure to leave a comment below and share this article with Treyarch.  Do everyone a favor, however, and avoid arguing over the issues and simply state your experiences and pass the article along.  If you can provide evidence of your claims, that’s even better.

Of course, you can expect MP1st to report all the latest patch information should any patches or information be released by Treyarch in the future.  If they release anything regarding a patch, you’ll be able to read up on it here.

I've been a gamer since before most gamers were born. Now a full-fledged member of the PC Master Race, I'm enjoying all the best games from both AAA and Indie developers in glorious 1440p. Praise Gaben and may the Steam deals be ever syphoning funds from your life savings.
Features Black Ops 2, Call of Duty: Black Ops 2, Featured, Lag Comp, PC, PS3, Xbox 360
view related posts
HOT MULTIPLAYER GAMES
& UPCOMING RELEASES