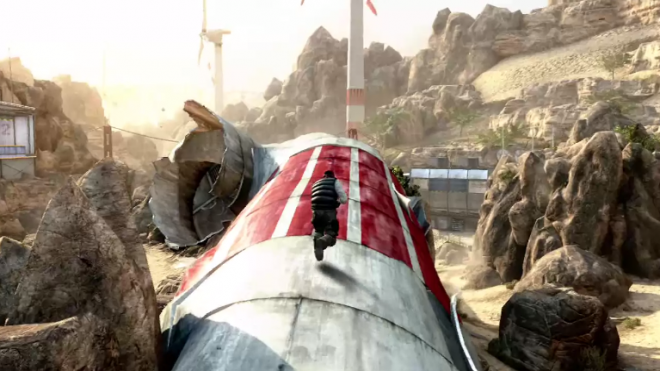 Many thanks to our own David Veselka for pulling the screen shots and tracking down other materials from the BOII trailer that appear in this video. You can check out the original trailer breakdown article with screenshots by David here.

One of the things I haven’t heard much about after yesterday’s release of the first Black Ops 2 multiplayer trailer is map design.  Considering how big a point of contention map design has been in both BO1 and MW3, it comes as a surprise that people haven’t been talking more about the info the trailer had.

The thing that struck me as most obvious was that the design mentality behind some of BO1’s best maps is back, but with a twist (hopefully for the better) in BOII.  Those wide open killzones and absurdly obvious lines of sight in BO1 have been replaced with more condensed routes and cover without ignoring what made BO1 maps good, symmetry and balance.

From what’s been made available by the work of reddit user zamzarvideo, so far, it looks like BOII’s maps are going to be very well balanced, lend themselves to fast fast paced gun-on-gun action, but large and open enough to avoid the constant clusterfuckery of MW3 maps like Arkaden and Dome.  Hopefully, Treyarch’s spawn system avoids revenge and “in-the-action” spawns and leans more towards the notion that death is a penalty and should cost you your place on the map, not give you free kills by spawning you right behind the guy that just killed you.

To quote youtube user cwatz1221 regarding IW’s design of MW3:

They made the game more frustrating, less rewarding and lowered the gap between good and bad players.

Deathstreaks, instakill firepower, close quarter sprayfests and so forth aren’t satisfying to get kills with. You feel no reward or satisfaction. On the otherhand you feel insanely frustrated to get killed by them.

Let’s hope that Treyarch has learned from their mistakes in wasting space (Berlin Wall) and MW3’s successes in making maps that felt safe to run around on (Lockdown), provided the spawn system didn’t screw you over or a camper didn’t kill you as you ran past their corner.  BOII is shaping up to be another solid entry in the CoD franchise by Treyarch, if not their best ever.  BO1 had it’s problems, but Treyarch is obviously listening to the community and working to correct all the things BO1 did wrong,

Please share your thoughts in the comments and stick around for the latest info regarding BOII right here on MP1st.