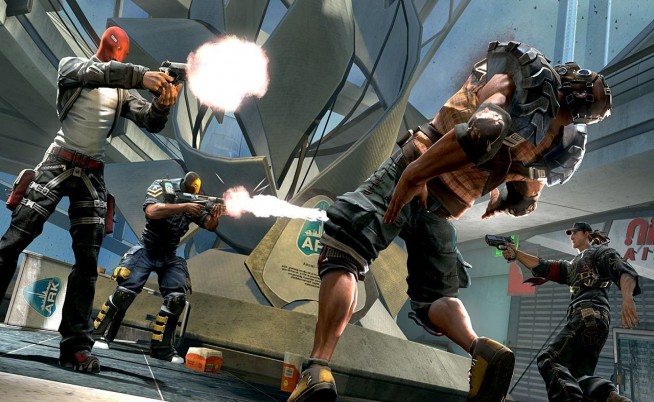 A few months ago, a game was released that was met with very mediocre reviews. It was faulted for having too few maps (8 in total excluding DLC) and very few modes (the lack of a standard deathmatch mode is a glaring weakness). However, one thing that almost everyone could agree on was the fact that it offered a unique multiplayer experience. That game is Brink.

Since I’ve seen this game listed between $20-$40 in recent weeks, I thought I’d do a small review for everyone who can’t decide whether or not to pick it up.

Brink is set in the fictional world of the Ark and features two warring factions, the Resistance and the Security, who are fighting for control of the Ark. Each multiplayer level has one side completing objectives such as blowing up certain targets, rescuing and escorting prisoners to safety, and hacking into terminals for information while the other team defends these objectives and tries to prevent their opponents for completing these tasks.

Each faction is made up of 4 different classes, each with its own strengths and weaknesses:

Each class has its own special uses and having a blend of them on your team is crucial for your team to be successful. Also, switching between classes is a breeze using special, in-game terminals located throughout the levels.

Brink also uses AI bots to fill any gaps in multiplayer matches, however these bots are rarely useful aside from providing you with the odd ammo clip or health boost and are best served as meat shields and should not be depended upon to complete objectives.

One of Brink’s best features is the Parkour system which allows players to jump, climb and slide their way around levels. Each of Brinks three body types (Heavy, Medium and Light) offer various mobility, however the lighter you go, the lower your health, so it pays to experiment a little to find the type that best suits your playing style.

Player customization is another huge aspect of Brink, each time you level up you unlock new clothes, weapon attachments, and skill points that you can use to make your character unique. There are also a few challenge maps that are used to unlock certain weapon upgrades such as larger magazines, muzzles, and speed slings (which help you switch weapons faster).

Now with that covered, it’s time to talk about Brink’s flaws. Aside from the terrible AI I mentioned earlier there are a few more issues I’d like to address. First and foremost: level variety. 8 maps is respectable for a game that has a robust single player campaign included, but when your main focus is multiplayer, I’d expect to see at least a dozen maps, if not more. Secondly, the stat tracking in this game is atrocious. Instead of showing you your kills, assists, and deaths, it gives you a 20+ character code that you have to input into their website in order to view your stats…ridiculous. Finally, there’s the small issue of multiplayer variety. There are essentially two modes: co-op challenges and freeplay. Challenge maps have you completing objectives against varying levels of skilled AI bots (I wish the AI bots in the online modes were this good) while freeplay is essentially the single player campaign with human players occupying both factions and teams take turns doing offence and defence after each game.

Now, to the numbers.