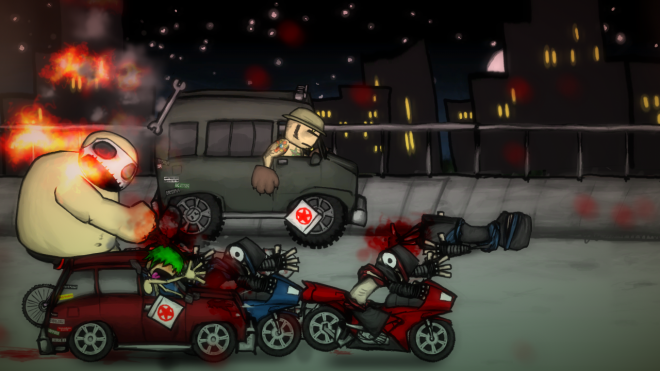 With Microsoft’s yearly Summer Of Arcade promotion now upon us, you can be sure the company will be releasing some pretty big and unique arcade titles throughout the month of August. This week’s title, ‘Charlie Murder’, now available for 800 Microsoft Points/$9.99 USD, is no different.

Ska Studios, whom have created titles in the past such as the Dishwasher series, have crafted yet another memorable game in Charlie Murder, an 8-hour, drop-in drop-out, four-player co-op, punk-rock-styled, beat ’em up, side-scroller. The game has Charlie and his four playable band members (Lester, Kelly, Rex and Tommy, all playable in 4-player co-op) battling hordes of evil creatures on their journey to confront Lord Mortimer, their ex-band member and now front man to Charlie Murder’s rival band, Gore Quaffer. You see, he made a pact with satan to take you out, which brought apocalypse unto the world.

At first glance, it may seem that Charlie Murder is just another typical beat ’em up title. But under it’s hood, it offers tons of depth as it combines RPG elements, such as character progression and unique character skills like being able to summon demons to help you and your fellow band mates with the ‘Anar-chi’, which serves as this games ‘mana’.  It can only be collected by visiting a tattoo parlor and can offer you different powerful skills, depending on the artist who’s inking your body.

Charlie Murder also features various loot drops, such as shirts, hats or gloves, that not only allow you to customize your character cosmetically, but also changw your attributes to make you stand out from the crowd. You can add Wolverine-esque claws on your hands which buff up your characters melee attack speed, for example. So, be sure to always be on the look out for items that can fit your play style. 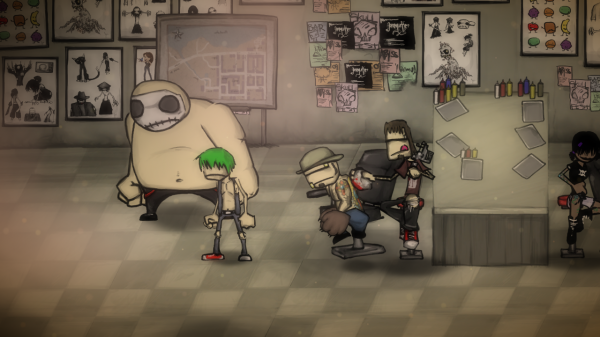 Charlie and Rex on the lookout for more baddies as Tommy gets inked up.

Of course, no real beat ’em up game would be complete without an arsenal of weapons and items that you can use to slay anything your way and, boy, does Charlie Murder have a wide variety of items that you can use to turn anything into a gory mess of red mist. You can even use limbs or organs from your decapitated foes, including arms or brains, as well as firearms such as a flare guns and a shotguns, or even slap some foes down with some fresh produce in surprisingly smooth yet chaotic gameplay.

If you find yourself  needing a break from all the gore and and various missions like taking on witches as an uzi-totting broom flying rocker, you can easily enjoy the surprisingly vibrant art style and indulge in some PVP action by visiting one of the PVP arenas where you and your fellow band mates can finally settle whose band this really is. As well as become a beer brewer. In this game, beers are like potions that can only be completed if you have the right ingredients which randomly drop from enemies, rewarding you with special attributes or “buffs”.

But with every good thing, there’s always the bad, and in Charlie Murder, it can sometimes be rather apparent. Checkpoints seem far and few, making your death that much more painful as you will have to clear the whole stage all over again and, once more, defeat any previously defeated enemies, leading to some time consuming and frustrating moments.

Additionally, Charlie Murder’s version of a smartphone, which is used to spend any skill points you received from levelling up in four categories (attack, speed, magic and defense), or to gain new abilities such as being able to perform a powerful attack with one of your bandmates. The thing is, it can be a hassle to access or even read what’s being displayed. It takes aways from interesting features like ‘Squ.iddl.us’, their version of Twitter, except that the more followers you earn, the higher the level you will be, as followers grants you experience points in the game.

However, despite the few issues that the smartphone presents, it does feature a cool little mechanic: If you were to find a QR code in your time playing the game, you can press down on the d-pad to bring up your phone’s camera to take a picture of it. Doing so will grant you a free item such as new clothing and food. 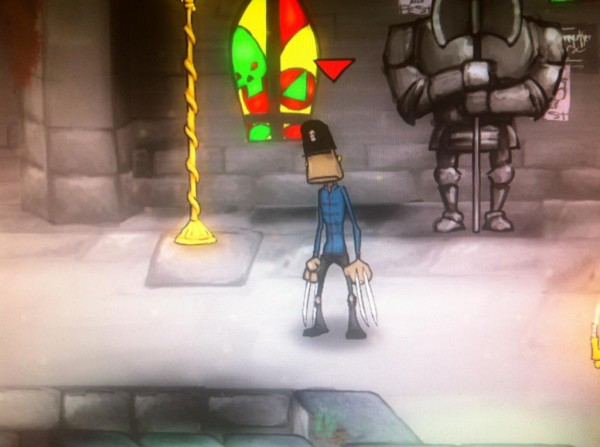 Despite Ska Studios making some rookie mistakes in a beat ’em up game, Charlie Murder still manages to deliver a very fun and addicting game experience thanks to the depth of customization, RPG elements and its high replay value due to a surprisingly lengthy campaign and things to do to kill time if you don’t feel like playing the story. Charlie Murder gets 4 stars out of 5 and is worth the purchase if you have some currency laying around.

This review was based on a copy provided by Ska Studios.