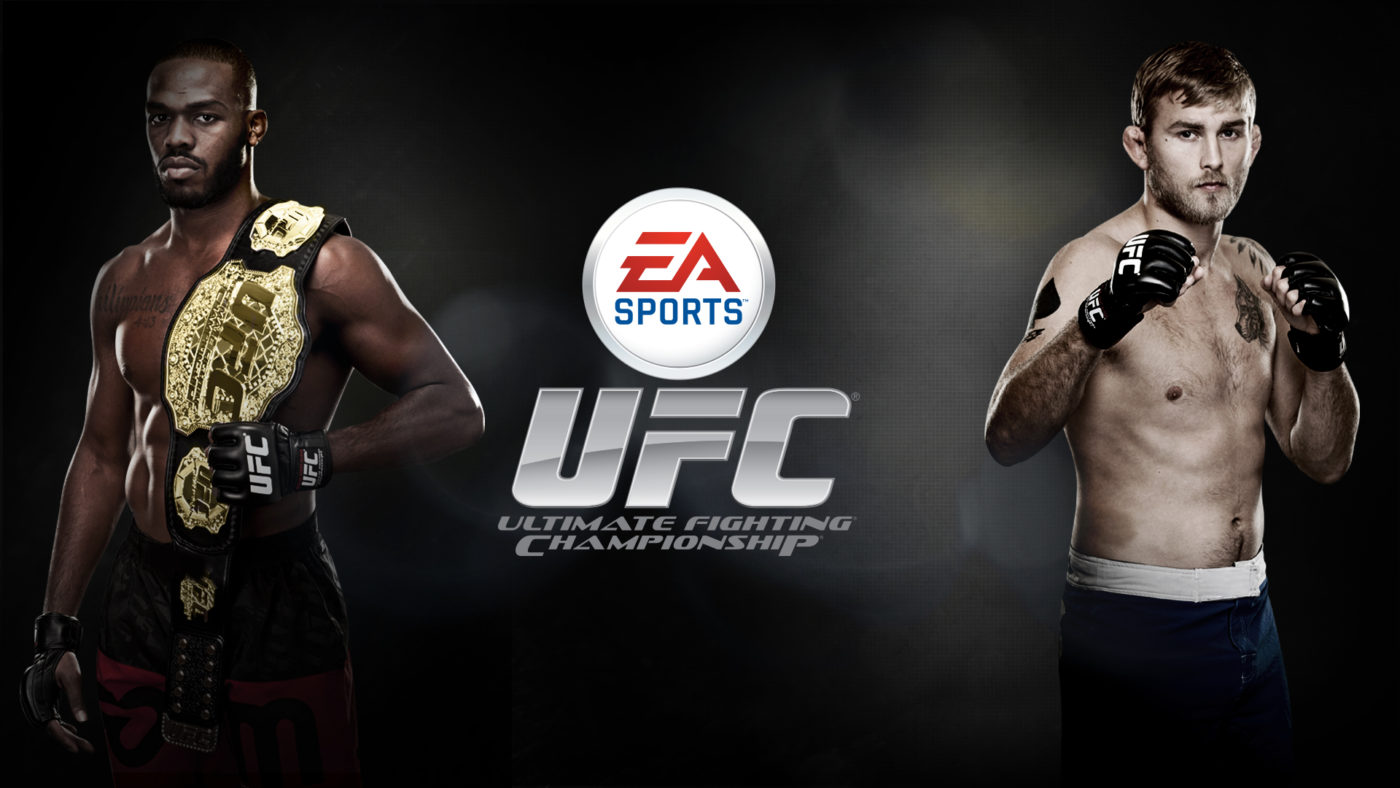 With EA Sports UFC having entered the ring just over a week ago, gamers have had ample time to dive into the online modes and multiplayer experience. With a few dozen fights under our belt, as well as a few pints of pixilated blood spilled inside the Octagon, we feel that we have a fairly good grasp on the overall product that EA Canada was able to deliver on Xbox One and PlayStation 4. Filled with both ups and downs, there is no shortage of topics that need to be discussed. Let’s get to it.

May I See the Menu, Please?

Being that your very first experience with the online portion of EA Sports UFC will be the menus, we felt that tackling things in a chronological order made sense. For the most part, everything runs smoothly. The menu system doesn’t lag as the previous THQ-developed installments of the franchise seemed to and, overall, things are laid out in a simple and functional manner.

Speaking strictly about options, however, there is one feature that we aren’t overly fond of. Depending on the game mode you choose (more on those in a moment), you may or may not be able to see what fighter your opponent is selecting. While, ideally, this would add an element of anticipation to things, all it really does is scare everyone into choosing the best fighter in the division. After all, who in their right mind would choose Mark Hunt, when you know with near certainty that your opponent is going to go with Heavyweight champion, Cain Velasquez? More often than not, this results in matchups where guys like Anderson Silva end up facing off against… Anderson Silva. Matchups like that get old in a big hurry.

While we’re cool with not knowing who we are going to face, it might be beneficial to allow people to disable duplicate fighters, or even input an option to have your fighter randomly chosen. The game already allows you to search for an opponent from a specific division, so why not add in the option to only match up against other players who are having their fighter randomly selected as well? Quite frankly, this would add a lot more variety to the online bouts that often feature familiar faces. 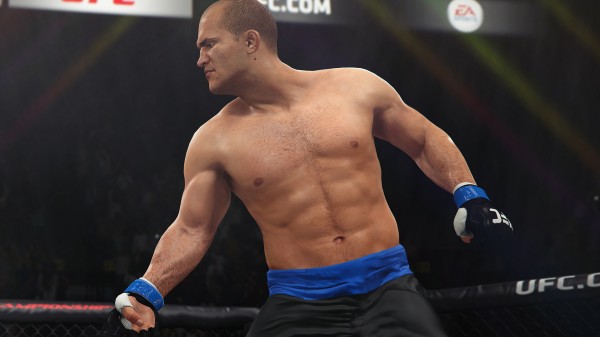 Moving along through the menu system and into the game modes, there are three main online matches that players have to choose from. The first and most casual are Rivalries, where you can challenge your friends while keeping track of who has bested who over the course of many bouts. Aside from getting to belt your buddy in the face for taking an extra long look at your girlfriend when he comes over, the statistic tracking will remind him of exactly how many times you’ve whooped him since the beginning of the rivalry.

Sticking with the casual approach, but adding in a bit of randomness, Quick Match is an excellent place to get in on some intense action, yet not have your stats reflect all the bumps and bruises you accumulate along the way. Not to mention, this is the online game mode where you can actually see who your opponent decides to fight as, making sure that Georges St-Pierre doesn’t end up standing across the cage from himself. It’s also an excellent way to get an idea of what to expect when you dive into the final multiplayer game mode available.

The clear multiplayer winner for us is Championships. Taking on a tournament or season style layout, it requires players to fight a certain number of times within a period of a few days. Your opponents are randomly chosen based on similar skill levels and point values are awarded based on wins and losses. Depending on the amount of points you accumulate over the course of your fights, you’ll either find yourself promoted to a new division, relegated to a lower one, or even earning a championship at the season’s end.

This is the game mode where you don’t get to see who your opponent chooses to fight as. While the action is a big step up in intensity from anything else EA Sports UFC has to offer, seeing Ronda Rousey try to armbar herself for fifteen minutes because nobody is foolish enough or forced to choose another competitor gets old fairly quickly. Still, with that being the only flaw that jumped out at us, the good far outweighs the bad in Championships and skilled players will definitely spend the bulk of their time here.

His Arm is On Backwards

The gameplay is the make-it-or-break-it aspect of any combat sports game. If the developer gets this right, pretty much anything else is forgivable. Get it wrong, however, and no amount of menu options, game modes or polish can save you.

EA Sports UFC does a magnificent job of capturing the spirit of real mixed martial arts. Once the action begins, it won’t take you long to get completely lost in the adrenaline-filled bloodbaths. Regardless of whether the fight takes place on the feet, ground, or in the clinch, everything feels smooth and authentic. In fact, even transitioning from one to the other is a seamless experience.

The damage and stamina are both handled very well in EA Sports UFC. Target a particular part of your opponent’s body and you’ll see it swell up, bruise and even bleed. At the same time, if you think you’re just going to spam punches and eventually score the knockout, you’re dangerously mistaken. If you don’t mind your energy levels, you’ll find yourself exhausted, resulting in a loss of consciousness or one of your limbs bent all out of shape.

Speaking of dislocated joints, the real high point of the actual fights has to be the submission mechanics. The clawing, mashing, controller destroying mess that THQ adopted is long gone. The new system, a mini-game of sorts, features a well-developed mixture of skill and intelligence. Once you slap on a hold, an on-screen HUD will appear, requiring your opponent to try and escape by pushing the right stick in one of four directions. Your job, as the popper of joints in this scenario, is to quickly block them from escaping by pressing the right stick in the same direction. If you hold their attempt to break free long enough, you’ll be given the opportunity to advance the submission before eventually forcing your foe to tap out or go to sleep. Simply put, even if you prefer to knock your opponents silly, the mechanic itself is genius. 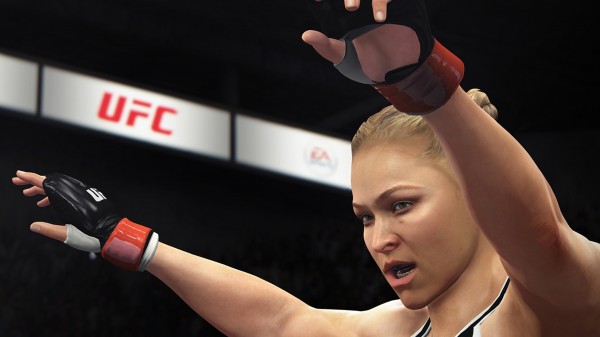 Utilizing the latest improvements in tech and visual quality, EA Sports UFC is built on EA’s new Ignite Engine. It sure helps bring fights and fighters to life with highly detailed and realistic character models, including that extra bit of visual flare like bruising over time and blood spatter. Animations look spot on and fighter models interact with each other in a believable manner.

Considering all the moving parts, it’s also impressive how the hit detection works with strikes. Even after someone is knocked out, the strikes continue to register until the Ref stops the fight. You’ll see an opponent in mid fall take a shot to the head and it will snap back. Or, a fighter fall as he’s knocked out and hit his face on your knee, which will react and respond accordingly.

A Fun Night of Fights

While it’s hard to fault EA Canada for the personalities of the people you’ll be competing against, there are some things that could have been done to eliminate a few of the bad habits that a minority of players seem determined to poison your experience with. While there are also things that are simply beyond the developer’s control, that doesn’t change the fact that they will have an impact on how much you enjoy the game, and therefore are worth mentioning here.

The biggest downer of the online fights are the way that people try and exploit certain aspects of the game. One example is constantly facing off against an opponent who simply chooses the champion in whatever division the bout is contested at. Another is when you put a proper beating on someone, only to have them quit the match before the results are final. While the latter only happened to us once in about 20 to 25 fights, the game didn’t bother to record that the fight actually took place. Not only did we lose out on a clear cut victory, we had to compete in an additional bout just to fulfill the requirements of our Championship season. We can only hope that our opponent took a loss for taking the cowardly way out.

As with most aspects of EA Sports UFC, however, the positives far outweigh the negatives. While punch spammers and Anderson Silva lovers are frequently found, the game is balanced enough to ensure that there is an answer to every gimmick your opponent tries to throw at you. Returning to the example of our cowardly foe who quit when we beat him, he was happy to stand in front of us and throw haymaker after haymaker. All we had to do was block, parry and then counter punch to turn his lights out, and hopefully make him throw his controller through the window. 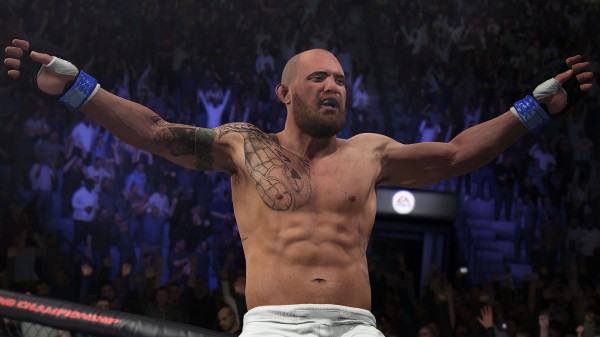 While the EA Sports UFC multiplayer experience isn’t without a few bumps along the road, all is forgotten once the cage door closes and Bruce Buffer belts out his pre-fight introductions. The menus are simple and responsive, even if they do lack an option or two that could take them to the next level. The game modes, while only a few, give players all the options they need to find the type of online atmosphere they’re looking for. The fights themselves are fun, intense and can be counted on to bring out both positive and negative emotions, depending on who’s hand is raised at the fight’s conclusion. For MMA fans, both casual and hardcore, EA Sports UFC is sure to provide you countless hours of a rich and rewarding experience.

For a first bout in the next-gen fighting arena, it looks like EA has a winner.