by Tom Gregorio
in Features, Previews

Initially launched in September 2010, Final Fantasy XIV was rife with bugs and glitches, awful UI, an inadequate amount of quests, and an economic system that made trading and crafting wares an absolute nightmare.

With the game universally panned by critics and gamers from all corners of the globe, Square Enix shut down servers in late 2012 in an attempt to rework the existing game into an enjoyable experience. This is how A Realm Reborn came to be and in August 2013, the game was relaunched. Addressing many of the critics concerns, FFXIV: A Realm Reborn received a much more favorable reception offering players an improved graphics engine, a new UI, public quests (or FATE), and the return of the Auction House (now known as the Market Board). Despite these additions and changes, the MMO landscape has changed drastically since FFXI and FFXIV launched with the F2P model now coming to rise. This begs the question: can A Realm Reborn, with a traditional monthly fee, rise to the top in a F2P era? Read on to find out.

The first sin A Realm Reborn had to repent for was the absolute dearth of questing found in the original FFXIV. A Realm Reborn has definitely made up for its past transgressions by offering players a ton of quests to partake in. Currently residing as a level 16 Lancer, I’ve done dozens of quests during my time in Eorzea. In this regard, A Realm Reborn bears more resemblance to the questing structure of World of Warcraft than it does with FFXI or FFXIV. This represents a fundamental shift for seasoned Final Fantasy MMO players since leveling typically involves partying with others and grinding, as opposed to completing quests. Despite offering a reprieve from the traditional grind, the quests often fall into the traditional MMO mold of “Retrieve ‘X’ Item” or “Kill ‘X’ amount of ‘Y’ enemies”. Any player who has played — or even seen an MMO be played — will get a heavy dose of déjà vu. As I progressed further into the game, more often than not I found myself mashing the X button and not reading a bit of dialog from my questgivers. In a genre that emphasizes escapism, its hard to be immersed when you realize almost every NPC is basically saying, ‘Long story short, if you kill a few of these things, I’ll reward you handsomely’.

A Realm Reborn does a few things to keep things fresh with the newly implemented FATE System. FATE — otherwise known as Full Active Time Event — is a term that essentially means public quests. These are quests that any player can partake in as long as they are in the highlighted area on the map at a given time. All players in the area are tasked with taking down an infinitely respawning group of enemies until the timer runs out or taking down a massive enemy who has a vast amount of health. Regardless of the FATE being completed, XP and rewards are doled out based upon participation. If you only fire one shot at the enemy during an entire FATE, your reward will be decidedly unimpressive. Participating in a FATE requires players to be within a certain level range in order to participate. If you leveled up too fast and missed out on killing the giant slug, fret not. A Realm Reborn allows players to temporarily lower their level if they wish to complete FATE’s they may have missed out on. 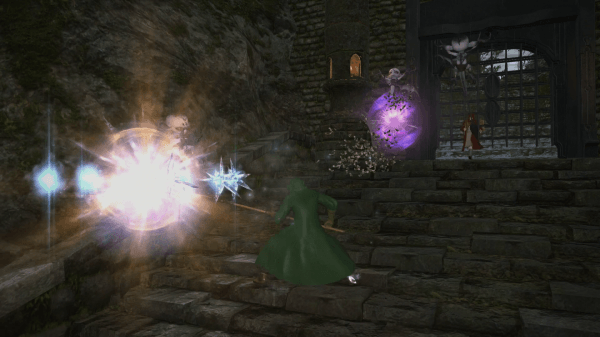 This FATE tasks players with taking down all the Imps before they can escape the keep.

The remaining quest types are Leves, Guildhests, and Story. Leves are similar to FATE’s in that a player must be in a specified area to complete them, but they can only be completed solo with other players unable to provide assistance. Guildhests are similar to Leves, but require a party to complete. If you are not in a party before hand, A Realm Reborn will automatically party up players looking to complete the same Guildhest. Story quests usually feature cutscenes, and involve a player teleporting to a unique instance to complete the quest. The dialog for story quests are a bit more unique than your typical quest, but they tend to have some quirks I find a bit irksome. For one, voice acting is not featured in all cutscenes. There may be a moment where an important character has voice acting in one scene, but the next time you run into that character they may be relegated to text boxes. While I’ve never found the English voice acting to be a strong trait of the FF series (and this entry is no different), it would be nice if the game would pick one or the other. However, my main issue is the focus of the dialog being how important and unique your character is. Despite the fact there are thousands of other players reading the exact same thing and completing the exact same quests, A Realm Reborn reuses story themes seen in almost every fantasy MMO to date. For example: references to being the one (“Are you?…no…couldn’t be…”), but then eventually — SURPRISE — you are the one! Or, the repeated reminders that mundane tasks, such as retrieving eggs a stone throw away or picking flowers in an adjacent field, would not be possible without your assistance. All the more reason to just mash the X button during dialog, accept the quest, and be done with it.

FFXI was a very community centric game mainly because any form of progression at later levels required a player to party up. While I hold out hope the community will be more vocal at some point, as it stands the chat box remains alarmingly quiet. Part of the issue is many players do not have a USB or Bluetooth keyboard in order to communicate easily. While the PlayStation 4’s on-screen keyboard is somewhat easy to use, it certainly isn’t as quick or as effective as using a physical keyboard. Even if PS4 players don’t embrace the chat box, I’m sure there will be plenty of experienced PC and PS3 players who will make use of it once the PS4 version launches.

What the community lacks in text communication, they certainly make up for with creative uses of emotes to depict acts that are sexual in nature.

A Realm Reborn makes good use of the PS4 controller and the hotbar system. Players can assign items, actions, emotes, abilities, spells, etc. to any position on the hotbar. Once assigned to a position, players can make use of the assigned space using a clever combination of triggers, the D-Pad, and the face buttons. Currently, because I’m a low enough level and I don’t have to juggle dozens of abilities, I have my non-combat abilities and items assigned to L2 + D-Pad / Face Buttons and all my combat pertinent abilities assigned to R2 + D-Pad / Face Buttons. Traditionally, players had to highlight the ability they wished to use on the hotbar using the D-Pad. It wasn’t the most intuitive layout when you begin talking about cycling through 4 hotbars and horizontally scrolling through 8 icons to cast a healing spell during the heat of battle. The L2+R2 system makes it easy for players to instantly cast the abilities and spells they need without needing multiple buttons presses. 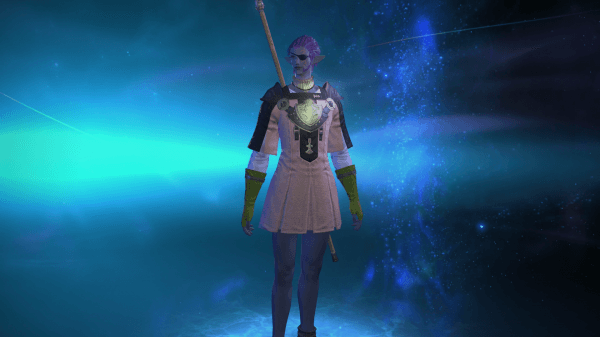 In nearly every MMO I’ve played, there typically comes a point where you have to make a lengthy travel to complete a quest that just makes you groan at the thought of it. A Realm Reborn does a fantastic job of letting players spend more time on quests, in battles, and crafting than traveling. First off, there is sprint. Most MMO’s traditionally require a spell to be cast for temporary Sprint or a Bard to play a song to make players run faster. In A Realm Reborn, the sprint skill is available to all players starting from level 1 (protip: USE THIS AS MUCH AS POSSIBLE!). While sprint will drain your TP bar fully, sprint doesn’t require a full bar to be cast. This means 15 seconds after sprint wears off, you can sprint again. Sprint can be used to help you run away from an overpowering enemy, but I have found its greatest use in cutting down traveling time around town and from quest to quest. Then there’s the Aethernet system. Crystalline in appearance, these nodes serve as instant transportation around multiple area in a city. Want to finish off a quest at the Lancer’s Guild? Find a node, select Lancer’s Guild, and you’re there. Using the Aethernet typically shaves off no more than a couple minutes versus sprinting, but when you have multiple quests to retrieve rewards for, the time really starts to add up. If it’s areas outside of town you wish to access, players can make use of Chocobos or Teleportation (both at a nominal fee) by Level 10.

No crazy level requirement, no insane quests to get a Chocobo or Teleportation license, all you have to do is hit Level 10. I wish all MMO’s were that lenient. 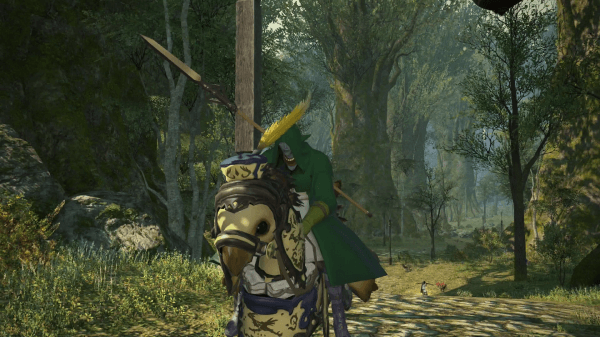 Fast travel, including Chocobos, will be available to players early on in their adventures.

The beta is currently available to all, and can be downloaded through the PSN Store here. While there are elements I certainly enjoy — in particular the combat system and the almost non-existent travel — I don’t think A Realm Reborn does enough to justify the $40 price tag + $12.99/month fee. It’s great to see a stronger emphasis on quests akin to World of Warcraft and a story driven approach, but for someone who has played his fair share of MMO’s, A Realm Reborn more often than not stumbles into all too familiar territory.

What do you guys make of the beta? Excited to pick it up when it launches on PS4 or not? Do you already own it? Let us know in the comments below.