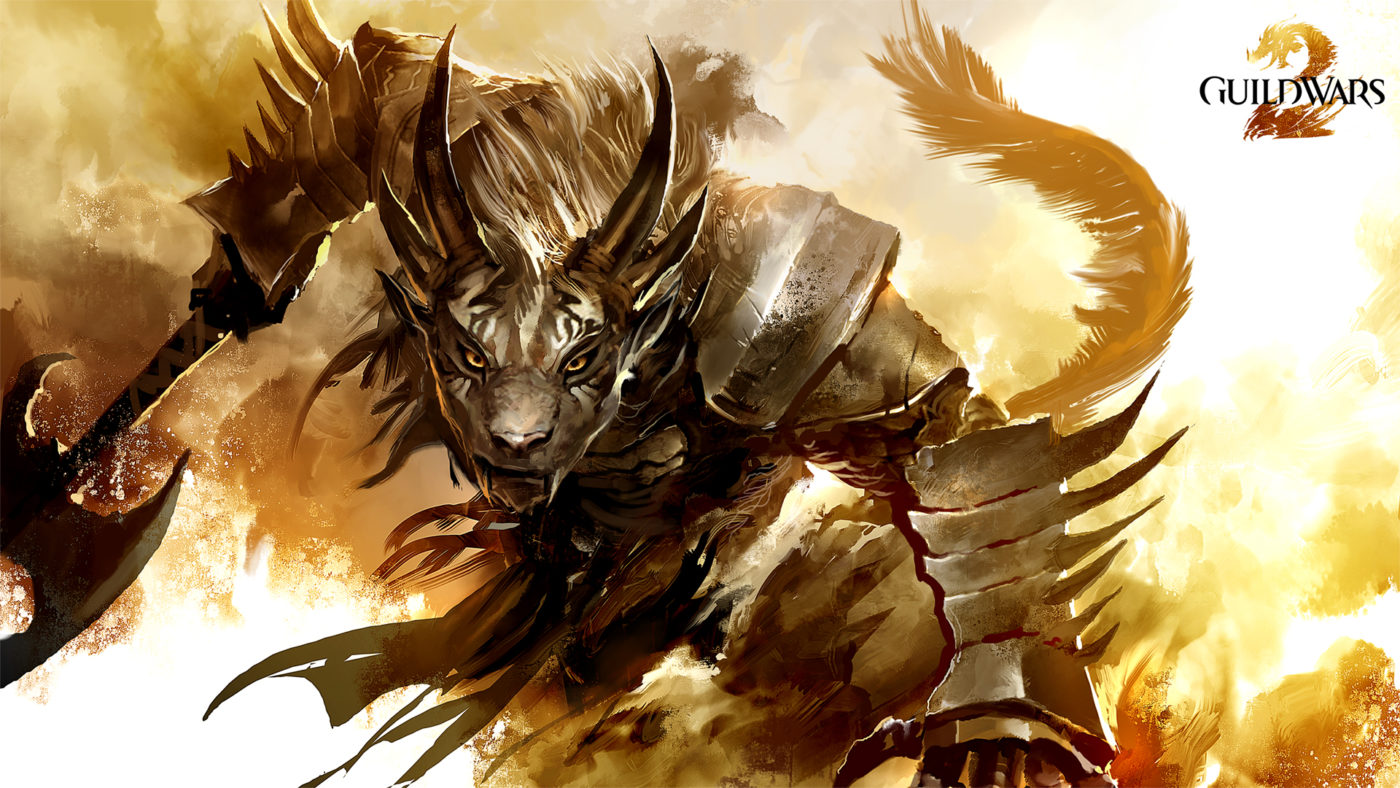 The time has come. Five years after the official announcement, after years of rumors, hype, marketing talk and speculation. The one MMO that promises to change the genre forever. Goodbye World of Warcraft, long live the new king: Guild Wars 2.

Or at least that’s the plan. Arenanet has promised a lot of things for this game. According to them, they would reinvent questing, remove grinding altogether, make end-game content accessible for everyone and much much more. During development, some of those concepts turned out harder to realize than originally expected, forcing Arenanet to take a few steps back in some areas. What did make it in? Is the game as revolutionary as they claim or is this simply a marketing machine at work? Let’s find out!

One of the first goals Arenanet tried to accomplish was making you feel like you’re part of the world. When you first create your character, you don’t just pick your profession and race but you also have to pick decisions made in the “past”. Every single decision will impact how the rest of your story unfolds, giving you hundreds of different paths you can choose before even having picked a name for your new hero. After settling for a name for your character, you are presented with a beautiful stylized cinematic recapping not just the history of your race, but also the past of your character depending on the choices you made minutes before. It is clear that the focus of this game is on the player and not on some kind of big villain like in more traditional MMOs. There still are enough baddies to keep you busy for a while though: The game takes place 250 years after the original. Five Elder Dragons have decided naptime is over and are wreaking havoc all over Tyria. Even with all this, the story stays centered around the player. In your personal storyline, you’ll have to pick sides and make decisions. All dialog is narrated and they struck the balance between serious moments and humor to make the experience both engaging and entertaining. The story-telling almost matches that of offline RPGs like Fallout and the Elder Scrolls. By far the best I’ve ever seen in an MMO. 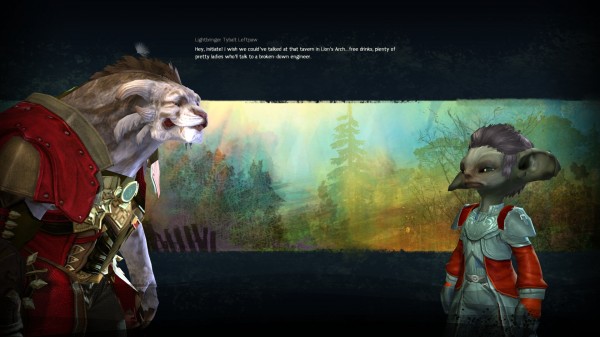 The main story line gets narrated by cinematics

This game looks good. Very good. They stepped away from a very realistic tone in Guild Wars 1 to something that looks a bit more cartoony. This fits very well with the “painted” look they gave the rest of the HUD. The characters, areas, buildings, spells and attacks, lighting – the way everything fits into the style and setting they’ve chosen is impressive. Again, this is something that very few MMOs can actually get right. Of course, you still need a good engine to power all of this. Long story short: Guild Wars 2 has. The DX11 engine doesn’t fail to deliver detailed and beautiful graphics no matter if you’re mountain climbing, deep sea diving or anything inbetween. The textures are sharp, the shadows look great and the draw distance will drop your jaw when you turn it all the way up.

The world doesn’t only look good, it also feels alive. This brings us to one of the other big new features: Dynamic Events. These are events that happen all over the world. They can be triggered by players but can also happen spontaneously. All players can help out when these events happen and they will get marked on the map for anyone in the vicinity. The dynamic factor also has a role to play in this: The outcome of these events can change the balance of power on the map and will trigger other events in response. For example there are quite a few events where you have to defend a small camp from invaders. If you fail to defend this camp, it will actually stay under enemy control. Waypoints become unavailable when contested and vendors will be dead on the ground. On the other hand if you manage to defend the camp, chances are the next event will require you to gather resources or train with the soldiers in preparation for a counterattack to take over the enemy camp. If enough players help out for long enough, the “good guys” will often proceed to push on and trigger a final boss. Killing it requires dozens of players and will reward everyone with loot! 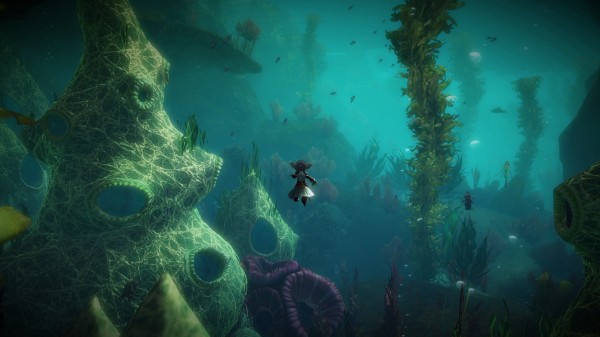 The aquatic worlds are breathtaking

Although your personal storyline and dynamic events reward you with a lot of experience points when you complete them, you’ll still need to get some from other places. Where from? Well… basically everywhere. You get XP for everything you do. The most common way is by helping out locals. On every map there are between 10 and 20 empty hearts. Each one represents locals in need of help. Helping out is represented by a progress bar. Actions that aid the locals will fill up the progress bar. When the bar is completely filled you gain XP and a monetary reward by mail (which you can retrieve from anywhere). This is the equivalent of quests in other MMOs. By cutting out the need to go to the quest giver to accept and complete the quests you save a lot of time. Kill stealing doesn’t exist anymore. If you damage a monster you will get loot and the kill credit. The loot on a body will only be visible to you so multiple players will always get their own set of loot. The same goes for pickups and almost everywhere else in the game where a reward is involved. This turns other players into allies instead of competitors and promotes playing together with strangers. While levelling up and progressing through your personal story, you gain access to instanced dungeons. These are like traditional dungeons where you fight your way through them in a group of 5 players. Two different modes are available: Story and Exploration. The story mode can only be done once and is part of your personal story line. The exploration mode has a higher level requirement but can be repeated for loot.

While a huge step up from other MMOs, it doesn’t end there. You also get considerable amounts of experience by exploring, gathering, crafting, discovering points of interest vistas, PvP and more. You can get to the maximum level without killing a single monster (once you get out of the starting area). The mantra seems to be choice. The road to level 80 is just as important as what you do after you reach it. You will be doing events from solo all the way up to working together with dozens of players at all levels. You don’t have to grind to get to cool stuff. Cool stuff happens all the time all around you and there is nothing stopping you from helping out. If you are bored, literally just take a walk and within minutes you’ll have something to do! 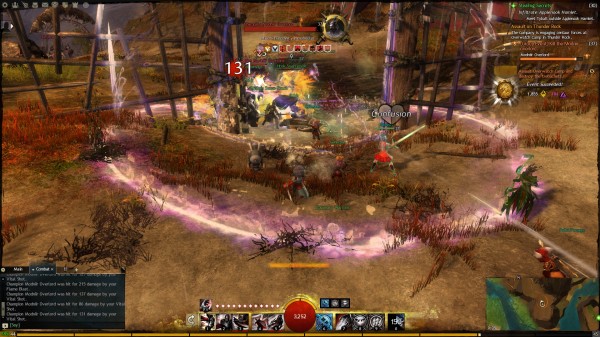 Dynamic Events cause a constant struggle in Tyria