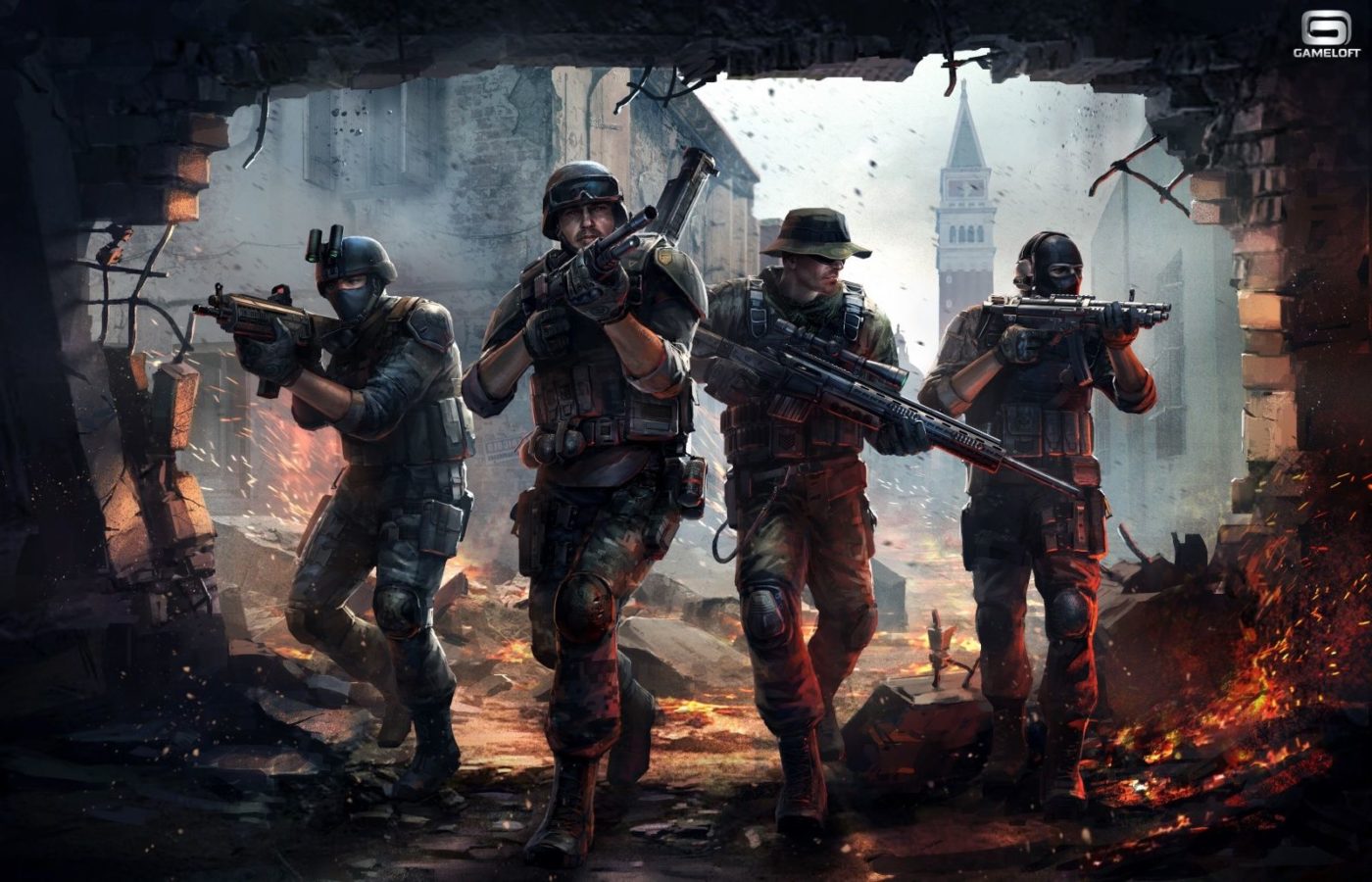 Modern Combat, a hand-held first-person shooter from developer Gameloft and the closest thing you’ll get to a triple-A console shooter on mobile, returns to iOS, Android, and Windows Phone with the fifth entry in the now long-running series.

Premium priced at $6.99 USD, Modern Combat 5: Blackout does away with in-app purchases and, instead, offers a shooter jam-packed with features, missions, multiplayer modes, and unlocks — an amount of content that measures closely to the offerings found in some console shooters.

Pushing some of the best visuals you’ll find on hand-held devices today, MC5 is not only easy on the eyes, it’s even easier to play thanks to highly customizable controls and an addicting pick-up-and-play formula mixed into its single player missions and multiplayer battles. 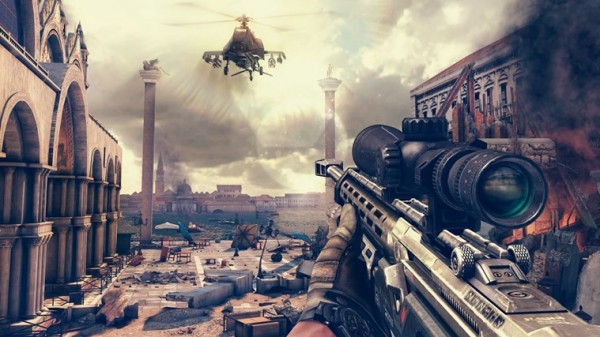 At your finger tips in the main menu are stat-tracking features that allow you to analyze your general performance, view weapon stats, count medals earned, and access customizable Killsigns that you’ve unlocked through in-game achievements. You can eye-up MC5’s top Soldiers and top Squads through built-in leaderboards and access Global and Squad Chat right from the home page to easily organize games with friends or strangers.

MC5’s Squads feature takes front and center stage, allowing players to form parties that stick together when moving from game to game, a major improvement over Modern Combat 4’s matchmaking system. Squads cans also participate in the exclusive Squad Battle multiplayer playlist, open only to groups of three or more willing to measure up their strength against other Squads. 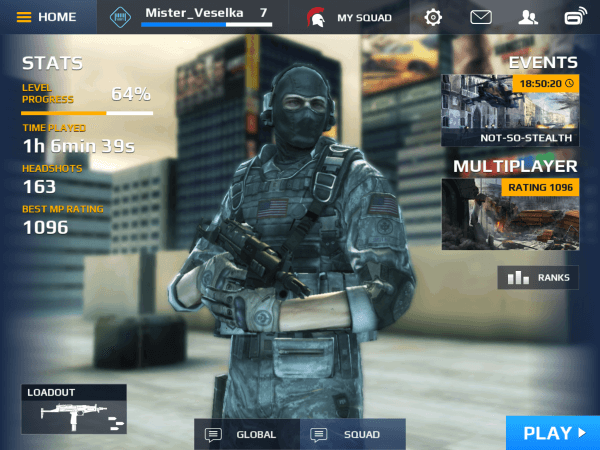 In addition to Squad Battle are four fairly standard multiplayer game modes; Free-for-All, Capture-the-Flag, Team Battle, and VIP — a solid round-up of deathmatch and objective-based modes to keep your touch-screen chops sharp. Popping into a match, you’ll be prompted to select between two sets of Support rewards, depending on the game mode. One tier includes support like the Recon Aircraft at three kills, the Auto-Turret at five kills, and the EMP Strike at seven kills. The other offers a Drone at three kills, an Airstrike at five kills, and a Bomber at eight Kills. If you’ve played any Call of Duty title ever, you’ll likely feel right at home with the multiplayer set up in MC5.

Matches are usually pretty quick and easy to get in to; I’ve yet to run into any long wait times, though I often appear to get matched up with players in Asian countries (I’m in North America). 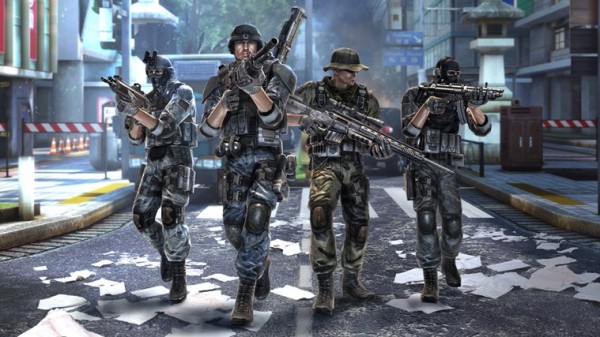 MC5 lets you customize four different loudouts, allowing you to choose among four character classes, each with their own unique abilities upgrade paths. The Assault class specializes in Assault Rifles and Pistols while dishing out extra damage and boasting additional ammo capacity. The Heavy is extra resilient with damage reduction and quick health regen and has access to powerful weapons like the Shotgun and RPG. The Recon class exposes enemy locations with Sub-Machine Guns, Pistols, and deadly critical kills. Lastly, the Sniper is able to take out opponents with stealth, trickery, and long-range weaponry while carrying a more effective Pistol as a back up.

Abilities for each class are upgraded linearly, but add just the right amount of RPG elements, ensuring that each soldier plays uniquely different from one another. Most abilities are passive and apply only to multiplayer, though some carry across to other modes as well. 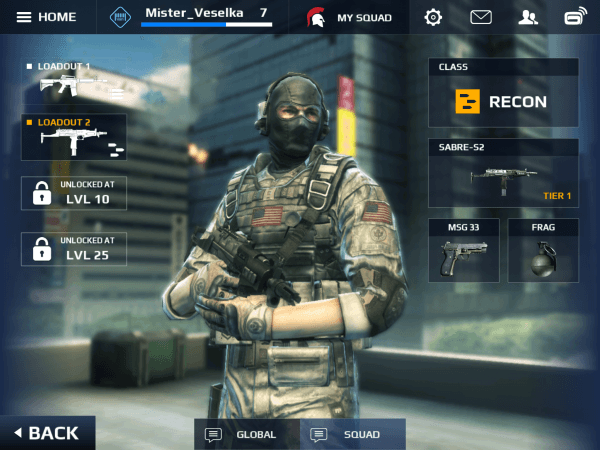 Weapons can be outfitted with an assortment of attachments. Primaries carry slots for barrel, grip, magazine, and optic customization while pistols can be tweaked with different barrels, magazines, and optics as well. There are also a number of grenade types to choose from, some of which are non-lethal.

Following a more traditional unlock pattern, attachments are earned by using a particular weapon in either single player or multiplayer modes while new weapons are earned by ranking up a class. XP, along with all four customizable loadouts, are shared across all modes in MC5, so you can rank up your gear in any way you choose. 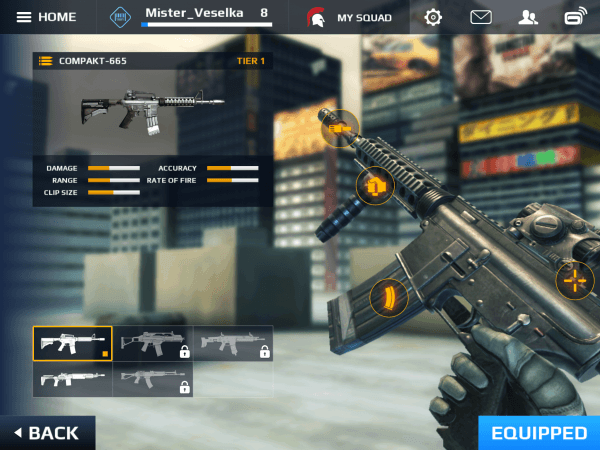 MC5’s campaign is made up of Story missions, Spec Ops missions, and short multiplayer tours, offering plenty to do in each chapter. Yes, you’ll still bear witness to over-the-top action sequences, cheesy dialogue, and often cliché FPS moments, but MC5’s story is still worth fighting through to the end.

Luckily, unlike MC4, story missions in MC5 are neatly broken up into very brief segments, each presenting their own set of challenges to complete. Not only does it give you a chance to view and equip newly acquired unlocks in between sections, it also makes MC5 one of the more playable mobile shooters out there. Missions don’t demand too much of your time, which you’ll likely appreciate when on the go. However, since your profile is shared between all modes, MC5 does require an internet connection at all times in order to play. It also appears to me that chapters are downloaded as you unlock them, so you won’t have this over-sized app taking up space on your device if you aren’t going to play it.

Lastly, Spec Ops missions are comparable to bonus missions that place you in specific scenarios, like breach and clearing a series of rooms or acting as roof top sniper support. Meanwhile Special timed Events that are constantly cycling can be tackled solo or with your Squad. 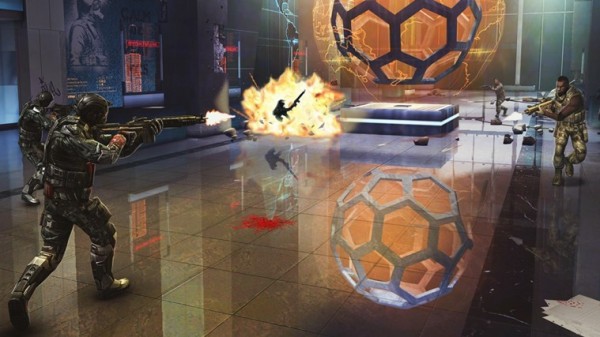 It doesn’t have a lot of competition on the market, but the plentiful control options and completely customizable heads up display, makes MC5 one of the easiest mobile first-person shooters to pick up and play. Because I tend to play iPad games with my device propped up on an angle on a desk, I was able to make use of four fingers, instead of just my thumbs, to control my character.

If you’re like me, try moving the Aim Down Sight button to top-left corner of the screen and the Fire button the top-right. That way, you can use your left index to ADS and your right index to fire while aiming and moving with your thumbs at the same time. I find that particular set-up is closest to resembling a console controller. If you’re device isn’t all that heavy, you can also rely on Gyroscope controls to look and aim. Don’t worry if your aim is garbage. MC5’s auto-aim is sure to help you out in single player modes, though you’ll have to hone your skills if you want to earn those high kill streaks the game’s less forgiving multiplayer.

In closing, the Modern Combat series from Gameloft remains the definitive first-person shooter experience on mobile devices. Modern Combat 5 brings that extra level of content and polish, putting it up there as one of the top must-own hand-held games this year. Multiplayer suffers noticeably from wonky spawning issues, but still manages to suck you in the same way a console shooter might. Class progression and unlocks will keep you hooked with constant rewards the same way MC5’s shorter missions and re-playable challenges will keep you coming back for more, on the go or at home.

It’s my personal hope that we might see support for multiplayer with additional maps, but, nevertheless, MC5’s $6.99 USD asking price is more than reasonable for what you’re getting. Gameloft has got a winner on their hands and under your finger tips, if you decide to dive in to the small-screen action.

You can find Modern Combat 5: Blackout on the Apple Store, the Windows Store, or Google Play.

This review was based on the iPad version of Modern Combat 5: Blackout, courtesy of Gameloft.

The Last of Us Gets Free Multiplayer Maps and New Weapons on PS4 and PS3, Latest Patches Detailed

You’ll Have One Week To Complete a Raid in Destiny, More End Game Details Surface