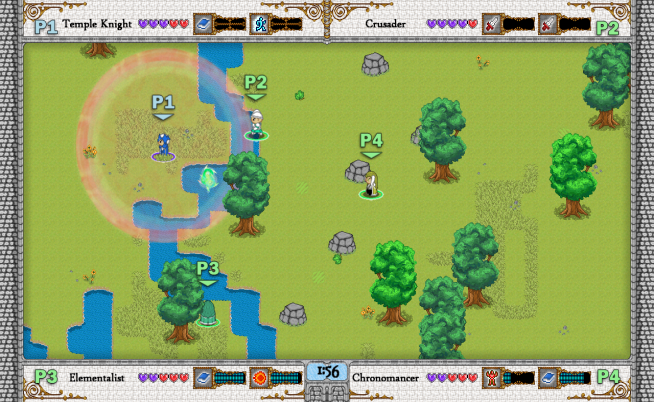 MP1st will be featuring a series of interviews and spotlights on independent multiplayer game developers throughout the next few weeks. We are thrilled to kick things off with an interview with Gigatross Games, the three-man studio on the cusp of releasing Grand Class Melee, a 2D RPG-inspired brawler for Xbox Live Indie Games.

MP1st: When the three of you teamed up to form Gigatross Games, did you set out to specifically create a multiplayer game?

Well, the concept of this game has a history.  Being that the dev team grew up together, we played many, many games together.  When we got bored of the ones we had, we invented new games and borrowed the best ideas from the ones we liked.  The best players will be able to see many different influences from older games in Grand Class Melee.  But at the very beginning, GCM was played with pool noodles in our backyard.  Over the years it became this Frankenstein that somehow worked as an indie game.  Naturally, it’s multiplayer because that was our situation growing up, playing games together.  We believe games are at their best when they bring people together, especially into the same room.

MP1st: What were the most difficult aspects of developing a multiplayer title in this sort of context (indie team, downloadable, etc.)?

The ‘indie’ part was probably the most challenging aspect of it.  Moments such as telling our friends and parents what we were doing; foregoing well-paying jobs just to have more time to work on this project might seem quite risky to many people, and it is.  We know it can be difficult to chase a dream, but we’re prepared to fight for it.

Another obvious challenge for us was balancing the many classes in the game. You never really know how an idea will play until you implement it and test it for yourself.  Almost every class in the game went through at least one redesign.  But, this was still a fun process for us.

MP1st: You published a game on the Xbox 360, but have grand plans for iOS and Steam releases. Why did you pursue the XBL indie program first? What advantages does each platform have over the others?

There are pretty substantial differences between the platforms and each have their pros and cons.  We felt that XBLA gamers tend to have a lot of interest in ‘indie’ content and are more willing to take a chance on something different.  Grand Class Melee works best as a single console multiplayer experience, so naturally we choose XBLA.  Also, a lot of content on Xbox reflects those old gaming throwbacks so we felt most comfortable there.

The iPhone market is massive but a bit fickle, very hard to predict.  It’s not a bad thing, but it leads to a more streamlined game design (Angry Birds, etc…).  The Steam community likes indie game content but the platform ultimately determines the style of games that end up there.  It depends on what medium your game would work best on.

MP1st: From your unique perspective, what trends are currently doing video gaming a disservice? As Gigatross continue to produce and publish games, what design or publishing elements will you try to shy away from?

I think the industry is great at producing games with a high quality of graphics.  These games sell well and are marketed aggressively, but sometimes don’t really innovate in terms of gameplay.  I’m walking a fine line here because we borrowed a lot from other games to make Grand Class Melee.  But, we feel that it’s put together in a way that’s unique from other games.  A lot of the time, AAA games are produced with gameplay as an afterthought, or at least innovation and creativity aren’t the focus.

At Gigatross Games, we’d especially like to avoid patronizing gamers by slapping new graphics on an old idea. This happens far too often in the industry and we’ll do everything in our power to avoid it.

MP1st: Can you tell us anything about future projects, platforms, or release schedules?

As of now, Grand Class Melee is in the peer review phase of the XBLA indie games process.  This means our game will be available to play sometime in the next week or so. We hope that people get a chance to play and provide us with some much needed feedback so we can continue to improve our developing skills.

In the future, Gigatross Games will continue to develop games with throwbacks to those games in the good old days.  Of course, we’ll add our own flavor to things.  Right now, we’re working on a strategy RPG that should do justice to the old ones we all remember from a couple of gens ago.

On behalf of my colleagues and I at Gigatross Games, thank you for the opportunity to help spread the word of Grand Class Melee. 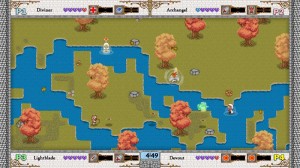 Stay tuned to MP1st for our upcoming review of Grand Class Melee.