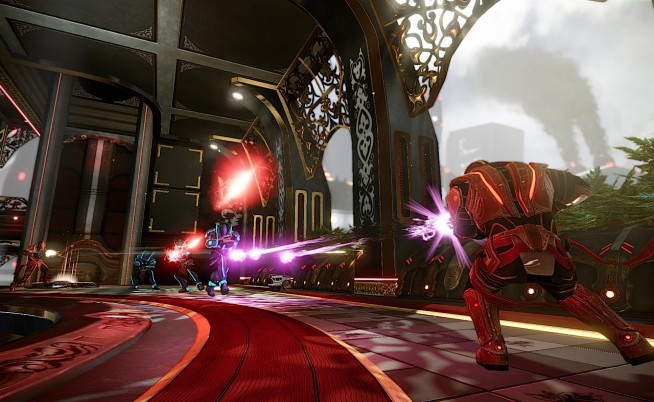 In a sea of first-person shooters, Nexuiz presents itself as a fresh yet very familiar take on the genre. Illfonic studios returns to the classic, arena-style, twitch-based gameplay that all FPS fans know and love. Based on a popular Quake mod of the same name released in 2005, Nexuiz provides simple, fun, and fast-paced FPS action without the complications or intricacies of modern shooters. This is pure, classic FPS gameplay but with a twist to keep players on the edge of their seat.

The best way I could describe Nexuiz’s gameplay is a mix of Unreal Tournament and Mario Kart. It’s childish fun, but for grown-ups. It shines in its simplicity. Players can run, jump, shoot and melee. No aiming down sight, no reloading, no cover, no sprinting or going prone. However, player movement is smooth and frictionless. The twist lies in the inclusion of “Mutators.” These mutators are game changers – random pick-ups scattered among the 9 maps included in Nexuiz. Upon running over one of these bright yellow, red and blue orb, players will then have a chance to select one of three randomly generated mutators. There are over 100 of these that can change the gameplay in minor, drastic or absurd ways. There are those that assist your team like regenerating health, infinita ammo, or weapon upgrades; those that effect the opposing team like inverted controls or slowed fire-rate; and then there are those that are just plain silly. Tip: If you see a giant whale floating in the sky, shoot it. I’ll leave you to explore the possibilities. It is possible to influence the roll of the dice in terms of what Mutators you acquire by adding “pips” to your favorite mutators in the Career menu. Pips are earned through points accumulated in-game and can be allocated to the Mutators you’d like to see pop up most often. Also keep an eye out for green gems that build up your shield and strength pick-ups that double your damage output.

Visually, Nexuiz is a real treat for the eyes, especially for a downloadable arcade title. The CryEngine 3 provides large, yet highly detailed and lush environments that would allow one to easily get lost in the sights. The flashy colors, explosions and pick-ups can give Nexuiz that addicting arcade-like feel while the bassy techno music will get players pumped for the combat. Though it looks easily comparable, Halo this is not. 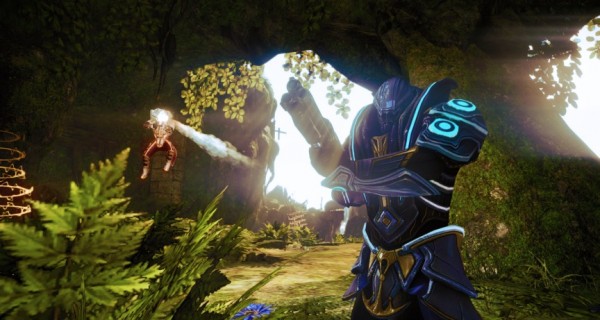 The 9 weapons range from your default shotgun, to good-old rocket launchers, sniper rifles and other bizarre, sci-fi contraptions. Each weapon has a primary and secondary function which can be experimented with for maximum effectiveness. Controls are extremely fluid and very customizable should you feel the default set-up isn’t to your liking. Aiming sensitivity on both the X and Y axis can be precisely tweaked to your preference. Maps and weapon pick-ups are balanced and designed for competitive 4 on 4 gameplay. However, they are also only built for two game modes; 6 for Team Deathmatch and 3 for Capture-the-Flag. Unless these maps become die-hard classics, this could possibly detract from Nexuiz’s longevity. It would be nice to see some new and unique game modes added in the future for variety sake.

Matchmaking can be a bit messy at times. Quick match is pretty simple to start up but can sometimes drag on trying to find the appropriate number of players. 8 (4 vs 4) is ideal, but sometimes it will settle for 6 (3 vs 3). Thankfully, Illfonic made inviting friends only a button away. The big issue, however, becomes apparent when players drop out part-way through a match. Nexuiz won’t find other player to fill empty spots or substitute with bots. This can result in very one-sided matches, making things rather frustrating. I could imagine playing with a group of friends would provide loads of good fun. Also, the sheer number of mutators alone begs for in-depth match customization. Unfortunately, this isn’t the case. The uncountable number of possible combinations could have lead to an insane amount of replayability. Leaderboards provide highly detailed player cards so you can keep close eyes on your friends and foes, including your own. The inclusion of a player’s kill-to-death ratio directly beneath their name in matchmaking makes it easy to see who to stay away from and who to pick on. 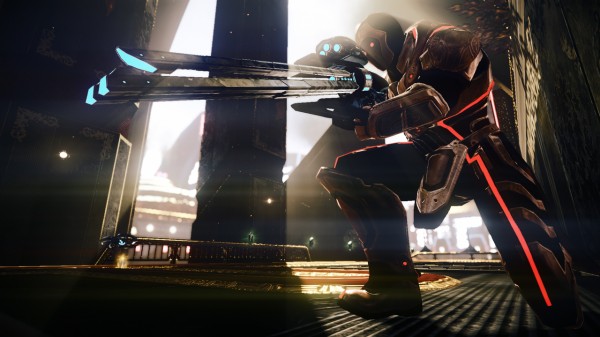 Believe it or not, Nexuiz actually includes a backstory behind the mindless shooting. The Kavussari and Forsellians, two warring nations set in a futuristic, sci-fi universe, agree to a truce for the sake of galactic peace. However, due to their passionate, undying hatred towards eachother, they have agreed to continue feeding their thirst for deadly combat across various Victorian-style arenas. As entertainment, these battles are broadcasted galaxy-wide and have become known as the Nexuiz Competition.

In all, Nexuiz is a very solid attempt to bring back the carefree fun of arena shooters, something that I think many FPS fans will welcome with open arms. I see a lot of potential if Illfonic can expand with new game modes, customizable matches and improve matchmaking. For it’s price of roughly $10.00, Nexuiz is a vibrant entry to the current palette of shooters on Xbox 360, PS3 and PC, providing something new yet rooted in the classics.

What’s your take on Illfonic’s Nexuiz? Let me know in the comments below!

[UPDATED] BF3 Close Quarters has Rush and Conquest, New Weapons to be Playable in Vanilla, No 64 Players, and More