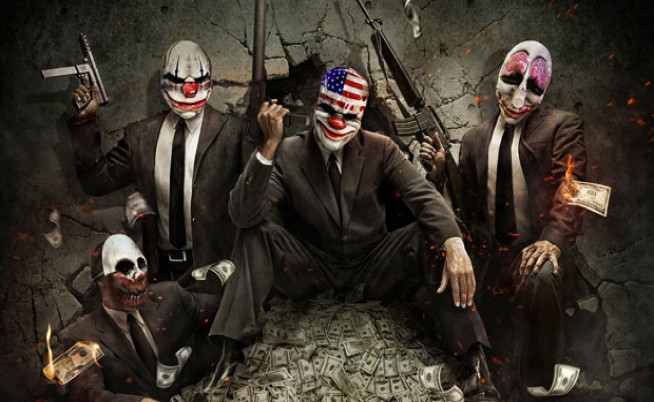 After much needed patch fixes the matchmaking, I am finally ready to give you my two cents.

Somewhat lost in the videogame madness that has become Fall 2011 came a downloadable title called Payday: The Heist which is currently available for the PC (via steam) and the PS3 (via PSN).

Payday is a co-operative multiplayer (no split-screen) game in which 4 criminals work together on various jobs to get in, get the goods and get out.

Currently there are six missions which include:

Before each match, players choose from a modest collection of primary, secondary and sidearm weapons, which must be unlocked. On top of this, players also must choose deployable items like med-kits, ammo bags, trip mines, and extra cable ties; “perks” like extra body armor, extra ammo etc; and a team boost, such as better accuracy, faster reloading, and so on.

Gameplay-wise, there is a definite Left 4 Dead feel. Think of it as L4D with objectives. Four players run around completing objectives such as tying up hostages (which can be used as trading chips for downed teammates), drilling through safes, finding keys, collecting cash, setting C4, and sawing through floors all the while fighting police.

Certain objectives require some time to complete and will sometimes stall out and require you to go and fix them. Although there is no clear mention of how long these tasks take, both the drills and saws do display a timer on them which can be easily read and communicated to teammates.

The police will gradually increase their presence from street cops to swat units and eventually send in an all-out assault wave full of a mix of generic swat units and special units which include:

Taking too much damage causes you to become incapacitated (just like L4D), at which point a teammate must revive you within a certain amount of time before you’re sent to jail. Jailed players are still able to return via a spawn or by trading hostages when the police are in between assault waves.

Finally there is a robust reputation system (147 levels!) which acts as the leveling system for Payday. By clicking the Select button on the PS3, a screen pops up showing you your next available upgrade in three separate categories; Assault, Support and Sharpshooter. Pressing the corresponding button will net you that upgrade on your next level up. Each category offers unique weapons and abilities so I recommend looking at the upgrades section on the main menu to better plan which areas to level up.

Now, to the numbers

4.5 – You’ll have plenty of fun running around the levels grabbing cash and rounding up hostages but stray too far from your teammates and the game goes downhill fast.

3.5 – There’s nothing special here, especially on the PS3 version. For a downloadable game, it’s respectable.

4 – In my opinion, the balance category is better suited for competitive multiplayer games, but since it’s here, I’d say that the cops have a slight advantage over our anti-heroes if only because of the Cloakers and the Taser’s.

5 – The system may be a bit confusing since they never really explain it to you. However, this game has a reputation system that spans all the way to level 147 spread across 3 streams; Assault, Sharpshooter and Support. More DLC on the way promises to increase the reputation level even further. There’s plenty to keep you interested.

4 – Thanks to the new patch, any problems you may have had connecting to and finding games have been remedied. There is always a healthy amount of games available at any normal hour. Being a cooperative game, microphones are encouraged and those without may have a harder time staying in games.

Overall Score (not an average)

5 Best Games to Play After a Break-up