Shooters are indeed getting weirder with the launch of PopCap Games’ Plants vs. Zombies: Garden Warfare on the Xbox One and Xbox 360.

Remember that old saying, ‘never judge a book by its cover’? This quote directly applies to Garden Warfare. It may look like a niche shooter that you should pass off due to its bright and colorful palette and unorthodox gameplay. But with this sort of mindset – brushing it off before playing it – you’ll miss out on, in my opinion, one of the most interesting and underrated games to come out this year. But how does one of the most popular tower-defense mobile games ever translate into a triple-A first-person shooter experience on both previous and next-gen hardware?

To simply put it, Garden Warfare, in a nutshell, is pretty much the love child of the Battlefield and Team Fortress series thanks to its surprisingly large map sizes and quirky, class-based, 24 player limit gameplay. That said, it manages to stay true to the series’ strategic roots while providing an all around new and unique breathe of fresh air in a time when the gaming industry is flooded with shooters that take themselves way too seriously. It takes us back to a time when shooters were more about having fun and weren’t so rage-inducing. 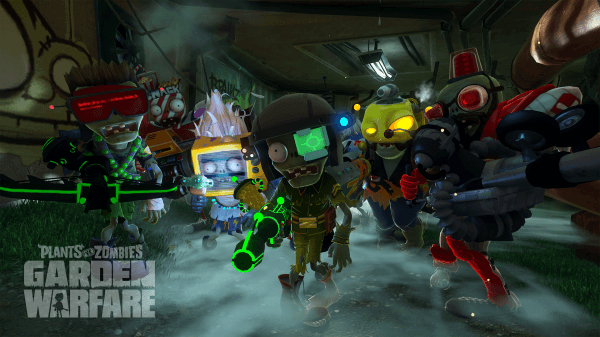 Underneath the bright and colorful visuals is an easy-to-pick-up but hard-to-master game that constantly rewards you, which will make it easy for your friends, family, and yourself to get in and play together, taking advantage of the game’s eight different classes. In this regard, PopCap Games did a fantastic job making sure each one was unique while staying true to the franchise and their abilities in the original games. Alongside the unique character classes, the game also boasts a progression system that allows you to unlock more items for your favorite class by completing some pretty simple tasks such as reviving your teammates or getting ‘x’ amount of kills with one of your skills.

First up: the protagonists of the series. The Plants consist of four classes who are the Cactus, Chomper, Pea Shooter and Sunflower, which translate into more familiar FPS archetypes like the Sniper, Melee, Infantry and Medic, respectively. On the Zombie side of things, you’ll find the All-Star, Engineer, Scientist, Soldier who serve as the Tank, Engineer, Medic and Soldier, respectively.

Much like its strategy game counterpart, Garden Warfare offers a great deal of ways to personally customize your favorite Plant or Zombie that not only changes the class aesthetically, but changes the way they play. Certain customizable characters will have different attacks in their arsenal. For instance, the frozen Pea Shooter can trade its primary attack for a weaker one, but one that’s capable of freezing Zombies in their path after a few successful hits. My personal favorite is the Marine Biologist Scientist who can trade in its trusty Zomboss Goo Blaster for the absurd Dolphin Cannon.

However, unlocking the different Plants and Zombies costumes requires you to put some time in the game. Earning character parts by purchasing sticker packs from the in-game store requires you to earn ‘x’ amount of coins to unlock them. Gathering five parts of a certain model will fully unlock that custom Plant paint or Zombie model. Or, you can patiently wait and unlock character parts with the most expensive sticker pack worth 40,000 coins. Thankfully, earning coins – upwards to 18,000 an hour – is as easy as killing enemies or completing some of the various objectives Garden Warfare’s game modes provide. It’s even easier to earn coins if you manage to hit the Jackpot in Garden Ops which awards you with 4,000 or 10,000 coins if you’re lucky enough to have the Zomboss slot machine land on three money bags or diamonds, respectively. 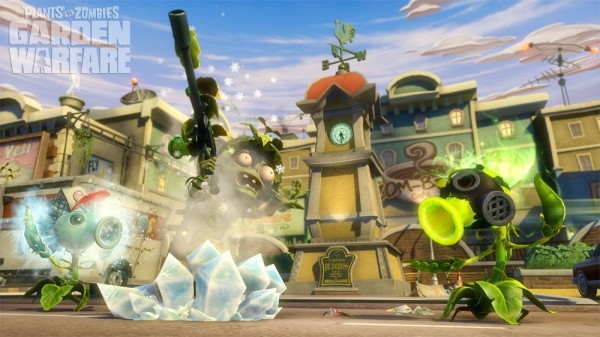 On to game modes. Alongside it’s wacky set of character classes and their alternative designs, Garden Warfare features modes that compliment the style of the game very well and fit within the Plants vs. Zombies universe. There are modes that appeal to both the casual and hardcore shooting audience alike, from the FPS staple Team Deathmatch, known as Team Vanquish in Garden Warfare, to the more complex Gardens and Graveyards, PopCap’s take on the classic Conquest and Rush mode from the Battlefield series. Gardens and Graveyards sees the Zombie team attacking and conquering the Plant’s garden, successfully capturing objectives in order to move to the next area of the map.

If going against other humans isn’t for you, Garden Warfare also features Garden Ops, which is essentially the game’s take on horde mode. It pits you and three of your online friends against wave after wave of the different Zombies types that have been featured throughout Plants vs. Zombies’ history while you come up with strategies to defend your garden. However, on every fifth round, the Zomboss pays a little visit and starts the slot machine which decides what type of zombies and bosses you will face that round.

If the above game modes intrigue you but you don’t feel like playing around with customized characters, PopCap has also included a very bare bones playlist for every game type. So for you purists out there, there’s something for you.

Unfortunately, if you do want to jump into the exclusive split-screen action with a friend of yours, you will find the experience rather lackluster on the Xbox One. Split-screen only allows for a rather watered down Garden Ops mode where the second player isn’t able to earn unlocks, achievements, coins or progress at all. To make it worse, you won’t be able to play online with the split-screen feature either. The other Xbox One-exclusive game mode, Boss mode, fairs a little better. Using the Kinect or a Smartglass enabled device, any friends or family members who might love the Plants vs. Zombies series but aren’t quite into shooters can join the fray by micro-managing your team in the same vein as the mobile titles. It’s not exactly split-screen, but I found it the more preferable way to play with others.

Despite Garden Warfare’s childish fun and light-hearted appeal, I fear the game’s launch time frame will hurt the online community in the long run. It feels squished in between some of this year’s bigger shooters and I don’t see the general population sticking around past the next two weeks once Titanfall drops, exclusive to the exact same platforms. You might ask, ‘well, doesn’t Titanfall appeal to a more mature audience while Garden Warfare is just a kids game?” The thing is, it stands as a testament to Garden Warfare’s quality that it’s an enjoyable shooter game for all ages. Also, don’t worry about the bad stigma currently surrounding some EA titles, as my online experience with the game so far has proven to be of higher quality than what I expected.

Since you can find the game on both the Xbox 360 and Xbox One (later on PC), you’re probably wondering what’s the difference between the two. It’s simple, really. It just comes down to the Xbox One having better graphics that pop out more and two additional game modes that any casual Plants vs. Zombies fans will love; Boss Mode and Split-Screen. In the end, I believe it justifies the additional $10 USD. That said, the Xbox 360 version is no slouch and is a steal for $29.99 USD. 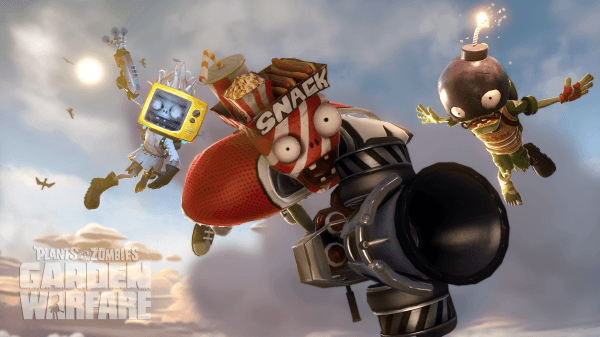 Plants vs. Zombies Garden Warfare is definitely a breath of fresh air in a era of shooters that take themselves too seriously, which hinders what games should really be about — having fun. Furthermore, aside from being a surprisingly fun game, Garden Warfare offers a pretty deep customization and progression system that will keep players coming back for more. Sadly, due to the game’s release date, I personally feel the community won’t have a chance to flourish and will abandon the game once some of this year’s bigger titles launch. Undoubtedly, the game would’ve benefited from a Summer release. However, that being my biggest complaint, it’s hard not to love PopCap’s more-than-solid FPS translation of one of this generation’s most fun-filled mobile experiences.

All in all, Plants vs. Zombies is ridiculously fun and is a steal for its price, even though it’s an online-only multiplayer game. But those without internet or Xbox Live Gold are better off spending their money elsewhere. For that, Plants vs. Zombies Garden Warfare receives four stars out of five.