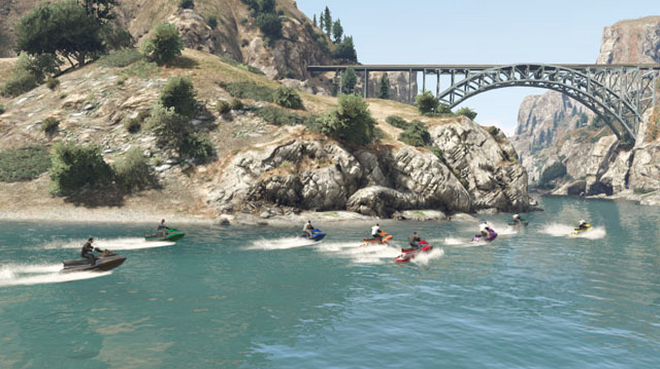 GTA Online – 8 Things To Do With Your Friends, Kifflom!

It’s been two weeks already since Grand Theft Auto 5 launched on the PlayStation 3 and Xbox 360, and although there are still a handful of gamers out there occupied with the single player portion of the game, Rockstar is readying to take the experience to the next level with the launch of Grand Theft Auto Online in only a few hours. So, with so much to do, where does one start?

1. Steal From The Rich, Give To No One

Ah, yes. A Grand Theft Auto game wouldn’t be a Grand Theft Auto game if it didn’t involve stealing. While large bank heists won’t be available day one, you will still be able to rob convenience stores and even rob other players of their money as they roam about. As long as their cash isn’t deposited in a bank, it’d up for the taking. There will be nothing more satisfying than successfully robbing other players of their fortune, and what better way to show the power of your crew off by dominating the world and controlling income.

2. Explore the Depths of The Ocean and Plunder for Lost Treasure

This is the first GTA game to ever allow us to swim underwater and explore the sea floor. There’s bound to be plenty of lost treasure buried deep on the sea floor that’ll net you some major cash. But make sure to watch out for those Great White Sharks, as they’ll surely be lurking, awaiting to prey on you and your group.

Why is this fort so heavily fortified in every GTA Game? Either way, getting a group of friends to storm the military base is going to be one fun adventure. Stealing jets, or even cargo planes, or just for the sake of building up a defense from other enemy players – this Fort is going to play a major role in the online mode. Plus, it goes without saying that the Fort remains mostly unexplored with a mysterious elevator in one of the buildings. No one knows where it goes or what’s hidden down there, but perhaps it has something to do with Mt. Chiliad.

4. Solve The Mystery of Mt. Chiliad

For the past two weeks now, GTA Forum members and Redditors have been trying to piece clues together as to what secrets Mt. Chiliad may hold. Alien spaceships have been sighted in multiple locations upon completing the SP with 100%, but despite that, the quests continues to deepen as more and more info is uncovered. Mysterious events may have taken place prior to the events of GTA 5, but guess what? GTA Online happens to be set before GTA V, making it basically a prequel to the game. What better way to solve mysteries than with a pack of friends to help you explore every inch of the map and test out every possible theory. It’ll be interesting to the outcome, considering that mission scripts have been found in the game data, hinting at possible alien-related missions. Though, aliens may not be the only thing players will encounter online…

Since GTA San Andreas, Bigfoot has been one of the biggest unsolved cases in the GTA franchise. Though there is supposedly a random encounter with a false Bigfoot (man in costume) in the SP, it still wouldn’t surprise me if the actual thing is in the game, just lurking around in the deep vine forests. We suggest you keep your distance if he does exists, however. There’s no way of telling whether or not he’ll be hostile.

6. Create Your Own Races

This is a new feature in GTA that allows gamers to create their own multiplayer races that others can partake in. Create that dream race you’ve always though of: starting off with some exotic car battles, then taking flight in epic aerial dog fights across the sky. Whatever you desire, it can most likely be created.

7. Show Off To Your Friends

There is nothing more fulfilling than arriving to pick-up your friends in a supped up car. You saved, you customized, and now it’s time to show off your dream vehicle. It brings that “Midnight Club” feel to the online experience and your friends will be jealous of you once they see that rusty tractor of yours.

Of course these activities are just scratching the surface. What can be accomplished in the multiplayer will most likely be limitless. So, what’s the first thing you plan on doing once Grand Theft Auto Online launches?