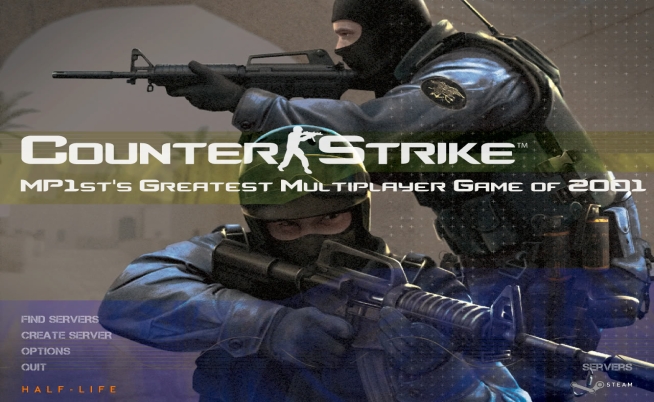 My fellow MP1st writers and I proudly present an 11-week-long series leading up to MP1st’s 2011 Multiplayer Game of the Year. Over the span of the next 11 weeks, we will be featuring the greatest multiplayer games of this millennium. Every year will feature 1 winner that is selected by the writer who tackles that particular year after weighing in arguments posed by MP1st editors. It breaks down to 1 winner, 2 runner-ups, and X number of honorable mentions.

I can’t  find a more worthy game to kick off this series than Counter Strike 1.1. Where all the modern FPS craze began.

I grew up playing games from the original GameBoy to PS2, but I didn’t fall in love with gaming until I tasted Counter Strike. It’s when I got my first bite; I found out that I was cut out for the multiplayer world. Counter Strike is one of the few FPS games that helped shape the genre forever. Before I dive into my story with Counter Strike, I’d like to explain the concept of the game for those who weren’t fortunate enough to grow up on it. The two opposing sides in each match are Terrorists and Counter Terrorists, and there are two main game modes that pit teams against each other, Hostage Rescue and Bomb Defusal. The premise of Bomb Defusal, which I mainly played, is simple yet effective; you have a spawn zone and bomb site; if you’re a Terrorist, then you have to either eliminate the enemy team or plant the bomb successfully. On the flip side, Counter Terrorists have to either eliminate the enemy team or successfully disarm the bomb. In Call of Duty, the Search and Destroy gamemode is the most akin to CS. In the other main game mode, Hostage Rescue, terrorists have to either wipe out the enemy team, or see out the round without losing the hostages. Counter Terrorists can either rescue the hostages or kill the terrorists. One of the things that makes CS a harsher game in current standards is the no-nonsense health system where your health doesn’t regenerate; when you get shot, you lose health (out of a hundred). You don’t heal until the round is over.

I’ve had some standout moments in my multiplayer gaming history, but nothing beats the thrill of pulling a ‘clutch’ with all of your dead comrades watching your every move. Especially, if you’re playing a LAN tournament, where all of your teammates’ screens would turn black when they die, and they would all huddle up behind you hoping you can clinch the win.  Or, when you enter the map ‘Assault’ with a teammate through the air ducts, with one squatting forward and the other backward to cover each other. Counter Strike is mp gaming at its purist. Speaking of Assault,  it’s one of the first maps I played on. My friends and I spent well over a year completely addicted to that map until we stumbled on what I would argue the greatest multiplayer map of all time, and no it’s not Dust, or Dust 2. It’s Inferno, a map I spent 5 years of my multiplayer gaming life playing on almost everyday. I haven’t played CS in a few years now, but I were to boot it up, I can tell you every invisible wall, call-out, and object in Inferno; it’s second nature to me. Side note: Dust is arguably more balanced and loved by the community, but for some reason my friends and I were perfectly content with inferno; we tried to change maps, but mapathy rarely creeped in its ugly head. However, when we got a tad mapathetic, we turned to one of the countless number of community maps, such as Ice World.

I could write books on my CS adventures, but one of the things that in hindsight seems amusing is that I scoffed at the notion of CoD and BF being contenders in the genre all along, and I’d said many a times that those were “wannabes” and would never be anywhere at the top in terms of fan base.  Even I remember playing CoD 2 because I was curious about the “superior” visuals. When I found out that you have to aim down the sights with every weapon, I burst into laughter thinking how ridiculous the system was. Ironically, CoD and BF are the 2 series that I now play to satisfy my multiplayer itch.

When it comes to the modern FPS genre, I would argue that CS is most influential modern FPS in the history of gaming. I longed for CS enough, and I can’t wait to get my hands on GO next year. Maybe I’ll find home in the ‘sniper room’ again (a position call-out on Inferno). If you have never played CS, you should check out GO, but even if you don’t, you have to respect a series that paved the way for your current favorite modern FPS.

Definitely my 2nd pick. The original Halo legitimized FPS’ on consoles by properly utilizing the controller. I don’t have anything but fond memories of the blood gulch, which will soon be featured in an upcoming editorial.

Arguably, Super Smash Bros Melee is the best game in the long running series, and Nintendo still has yet to top it. Hopefully, Wii U’s iteration will be at least as good as Melee.

I’ll leave the honorable mentions to you, so please let me know what I overlooked and share your CS stories.

Battlefield and Call of Duty: A Detailed Analysis of Both Franchises Pt. 2