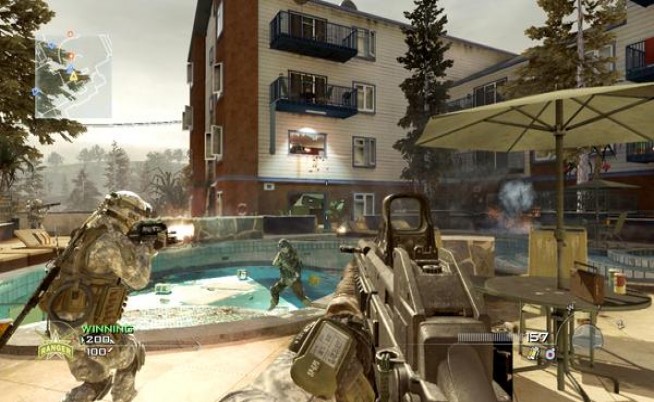 Video game forums. You will never find a more wretched hive of scum and villainy. According to gaming message boards, yearly sequels are bringing rise to the apocalypse, first-person shooters are corrupting the industry, and you didn’t like Final Fantasy XIII because you are an idiot and just “didn’t get it.” While new (and yet unfounded) theories and rumors are introduced daily to the forums, there are a few classics that never seem to die. Most that aren’t erotic Viva Pinata fan fiction have to do with multiplayer gaming. The competitive gaming sphere is one rife with rumors, theories, and myths as to how to become a better player, why you are a bad player, and how to not suck so hard.

These are the top 5 multiplayer gaming myths as perpetuated by the gaming community.

You have a 3.2 KDR. Whoa. Impressive. Oh, wait, you also have a win-to-loss ratio of 0.03 in Capture the Flag because you refuse to play the actual game, and instead play your own bizarre game wherein your KDR is somehow directly proportional to your skill, talent, or the amount of ladies who will one day knock on the door to your apartment, desperate for your tender embrace. If you exclusively play Team Deathmatch (or Team Slayer, etc.), then yes, that is impressive, and you can brag about your skill (assuming you’re not a cheater). However, as soon as you dip into objective game modes, your KDR becomes completely irrelevant. It’s been tainted by the kills you gained while camping outside the objective in King of the Hill, or Domination, or what have you. This popular skill myth is akin to me playing professional basketball, and evaluating my skill based on how many people in the crowd I can kick in the nuts before getting arrested.

Your elite gamertag is a valid representation of your skill

If a gamer in your lobby is sporting a tag that reads, “xXxH4loG0dxXx,” he probably received Halo 3 and some Microsoft Points for Christmas one year, and changed his gamertag in order to separate his elite skills from those of his peers. He quickly realized that his prowess only existed when he was competing against his geriatric grandfather, but his parents would not provide him with any more Points money to change his tag again. Also, if your gamertag has 420 anywhere in it, I could easily fill a series of books listing the jobs and friends you’ll never have.

Once I saw a documentary about an American soldier who, during World War II, prided himself on his ability to pull off sick 1080 no-scopes. He often chided his comrades and referred to them as lesser soldiers because of their inability to spin around in a circle and, while spinning, kill an enemy with a headshot. Then, in the midst of a heated and important battle, he attempted to perform a dope drag-scope, and was torn apart by Nazi dogs of war. The end.

But seriously, trick shots are not helpful at all in any sort of gameplay scenario that isn’t a dedicated no-scope lobby or something. Nobody can consistently pull off trick shots in game better than using a weapon like a normal person, so stop crippling your team and use a scope. Your cute little montage that cost you 74 deaths is not a worthy pursuit in public matchmaking.

Leaderboard positions are a valid representation of your skill

If you brag about being higher on the Call of Duty leaderboards than your friends, you are a special needs child. Your special need? Common sense. The leaderboards for almost every multiplayer game track points or experience, not skill level (R.I.P. Halo 3). Points and experience are gained by playing the game. You are essentially bragging about how little time you devote to your education, family, and hygiene. If you go one-on-one with a friend and beat them 8 times out of 10, you have cause for braggadocio. If you neglected to wash your body for three days, you have no cause for celebration. Only shame. Stinky, stinky shame.

You have all gold camouflage for every weapon! Awesome! Know what else you have? Fungus in your elbow creases and dead cats in your kitchen. Like leaderboard positions, end-game gear and goodies are only representative of your time investment. It gets tiring hearing players brag and tout their gold camo, epic scopes, or legendary character skins when anybody could get the same if they had the same lack of real-life opportunities. I’ve been bested many times by a Halo: Reach player equipped with the Inclement Weather armor effect, but I’ve also beat down many gamers with the same armor effect. Some of the best Reach players haven’t earned enough credits to purchase the effect; they’re just innately good at the game. They have tangible skill. Trinkets do not in any way equal skill. They’re just a fun carrot-on-a-stick to keep players invested in the respective game.

Liked this article? Check out some of our other features!

BF3 – More Weapons in Retail Version, Biggest Maps Yet, and Changes to Unlocks