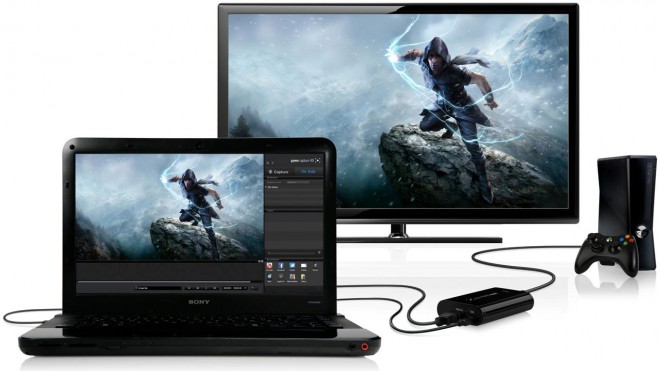 The recently released Game Capture HD by Elgato has been making quite the scene lately in the YouTube gaming community, mainly because it’s the first real competition the Hauppauge HD PVR 2 has ever had.

The real attraction though is quality.  The Game Capture HD is currently the highest-quality-by-the-numbers external capture device on the market under $200.  At 30Mbps, it’s recording quality is essentially double that of the HD PVR 2.  While visually, that might not mean a whole lot aside from slightly improved clarity and color depth, in editing it proves invaluable.  Essentially speaking, the higher the bitrate, the more video you have to work with, which means you have more latitude for color correction.  Add to that the Game Capture’s ability to record in true 1080p (30fps max) via HDMI, and you’re left with a remarkably high quality HDMI recorder.

I mistakenly mention that he does a side by side comparison with the newer HD PVR 2 when it’s actually just the original HD PVR.  However, the difference in recording quality between the two PVRs is roughly 2Mbps, which isn’t really all that great of a difference.  Being able to record via HDMI does improve the image quality quite a bit, but at such a low bitrate, the HD PVR 2’s quality is still inferior to the Game Capture HD’s in my opinion.

What makes the Game Capture HD really stand out though, for me at least, is the software behind it. Elgato really spent some time and money developing their software whereas everyone else seems to just throw together the simplest recording software they can before release.  In addition to recording, the Game Capture HD software functions as a simple editor and is eventually going to support live commentary (recording your voice and gameplay simultaneously) and livestreaming (via twitch.tv) straight from within the software itself, rather than having to rely on software like Xsplit to capture the preview window.  It’s obvious that Elgato knows what they’re doing when it comes to software and they’re good at making it look good and work well.

Some minor issues I have with the software/device are that you can’t turn off the Flashback Recording, which hogs CPU cycles and storage, bogging down other programs trying to access the drive being used for storage and impact system performance overall.  To the best of my knowledge and experience, the software needs to be opened and the capture card needs to be plugged into the computer running the software for it to display the pass-through signal.  Once the pass-through starts working you can close the software, but it’s still an annoyance.  Power via USB is also required for it to function, even just as a pass-through device.  Lastly, the way the card/software handles audio is somewhat finicky.  All games are mastered a little differently, some are louder than others, some are quieter than others.  The Game Capture software has no auto-adjust feature that senses your audio is too low or too high and changes the gain accordingly.  My experience with the original HD PVR was that it seemed to normalize all the audio running through it (think sound check in iTunes or on your iPod) so that it was always the right volume.  Hopefully, Elgato addresses these issues in future updates.

Call of Duty: Black Ops 2 – How to Win the Race to Prestige Master

Dust 514 in Closed Beta For The Rest of The Year, Key Giveaway