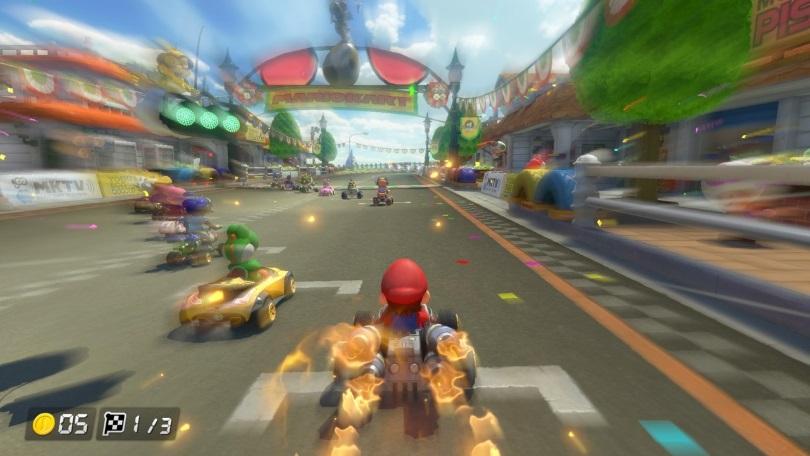 Competitive multiplayer gaming has a number of advantages over standalone gaming, not least the social element and the added pinch of adrenaline that accompanies such games. While the market for multiplayer titles is arguably more robust than ever, there is still much to be desired when it comes to variety.

Virtually every multiplayer game that is included on the most widely played titles in the world has the same format: shoot, stab and blow up your fellow players in order to obtain the highest body count. While there is nothing wrong with this, sometimes you want something different.

If you’re looking for a game that retains the best elements of competitive multiplayer gaming whilst dispensing with the tired old deathmatch format, read on to explore 5 truly worthwhile multiplayer games that aren’t focused on combat.

Is there any better place to start? Since the heady days of Gamecube’s dominance, Mario Kart has been the premier social game for people of all ages and tastes. It may not be a combat game, but when your fellow players hit you with a red shell on the final lap of Rainbow Road, it certainly feels ruthless. It’s a colorful, varied, and at times absolutely unhinged multiplayer classic that provides countless hours of fun, whether you’re playing with friends or strangers. The game can be enjoyed in all of its manic glory on the Wii U, Nintendo DS, Android, and the Nintendo Switch.

If you’re looking for an MMORPG that goes beyond team deathmatches and violent quests, this cult classic might be the one for you. Set in a sprawling open-world simulation of Ancient Egypt, you can choose to be an artist, a Pharoah, an architect, a bureaucrat, or a religious leader, after which you work alongside and against thousands of other players to make your mark on the world and rise to the top. The game is known for its Byzantine set of social rules, with players who breach them often being punished or ostracized by other players for doing so. It’s certainly a weird game, but there is none other like it.

If you want to put your poker or blackjack skills to the test in an atmosphere that recreates the excitement of a Las Vegas casino, you can play multiplayer live stream games on the popular Canadian online casino William Hill. Players can use their strategy and cunning to compete for real money against players from anywhere in the world, as well as against a real-live casino dealer who you interact with via a livestreamed setup. Other players may not be able to see your poker face, but that doesn’t mean you won’t need to use your bluffing skills if you want to come out on top.

Anglophiles and Austen fans who want a non-violent multiplayer need look no further than this soothing MMORPG based on the works of Jane Austen. Set in the English countryside in the late 18th century, the goal of the game is to work your way up through the ranks of high society, in an intensely competitive environment in which every move you make will affect your social standing. When you’re not climbing the greasy pole, you can spend your time enjoying a range of serene minigames that include fishing, hunting, sewing, and piano playing.

There are countless multiplayer racing games that deserve a mention on this list, but Dirty Rally 2.0 might just be the most immersive. It’s a hyper-realistic game with arguably the most extensive vehicle customization system in the whole genre, whilst the actual racing mode is guaranteed to give you the adrenaline rush you’re craving. The sheer variety of gameplay available on this title makes it one of the best multiplayer experiences on there.

Combat multiplayer games are always a good time, but sometimes we need a different pace. Try out these non-violent multiplayers if you’re looking for a different level of competition.