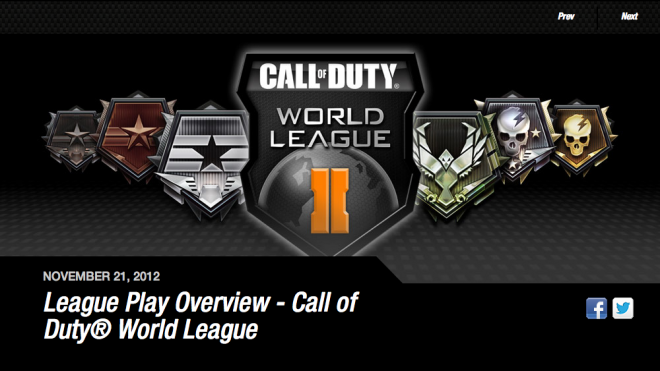 League Play, a brand new feature to Call of Duty: Black Ops 2, allows players to compete against similarly skilled opponents as either a league team, or as a solo competitor.

Initially, League Play features two series that sport different rules and game types. Players will need to take part in placement matches at the start of each series in order to be placed in a division. These series are the Moshpit series and the Champions series, both of which are currently in Trial Season.

Moshpit utilizes standard game rules in a mix of Team Deathmatch and objective-based game modes while the Champions series will utilizes competitive game rules in a mix of objective-based game modes only. Currently, Moshpit supports a 6v6 format while Champions supports a 4v4 format. You can get a more detailed overview of the Moshpit series right here, and the Champions series right here.

Within each series are six different divisions. Your goal is to end up in the best possible division by the time the league season is over. Each season lasts approximately 30 calendar days and each season will be split apart by a Preseason, giving players a chance to familiarize themselves with the new rules of the upcoming season. Check out the divisions below:

Top 2% of the active population

For even more details, you can visit the official Call of Duty World League mini-site right here. (Note that you’ll need to be logged into ELITE in order to view it.)

Will you be entering into League Play?