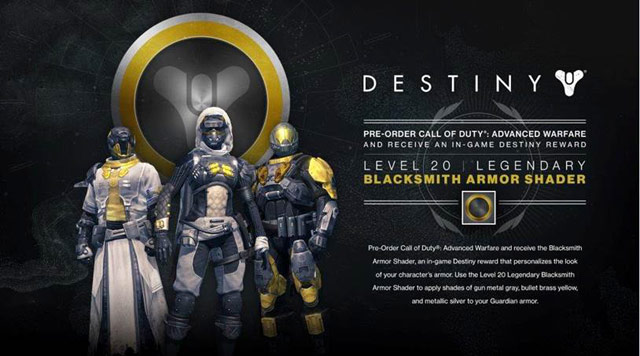 Bungie and Sledgehammer Games are teaming up to offer gamers a neat way to represent Call of Duty: Advanced Warfare in the brave new world of Destiny.

Starting September 1 through to September 21, anyone with an Advanced Warfare reservation through GameStop or EB Games will receive a download code to access a special Level 20 Legendary Blacksmith Armor Shader in Destiny at launch. The item will allow players to paint their Guardian’s armor with official Advanced Warfare colors; gun metal grey, bullet brass yellow, and metallic silver.

We hope to see a similar offer for Advanced Warfare, ’cause who wouldn’t want to deck their Operator out in either Titan, Warlock, or Hunter Guardian armor?

If you’ve already pre-ordered Advanced Warfare, you’ll be able to pick up your code any time after September 1. Destiny launches on Xbox One, PlayStation 4, Xbox 360, and PlayStation 3 on September 9.