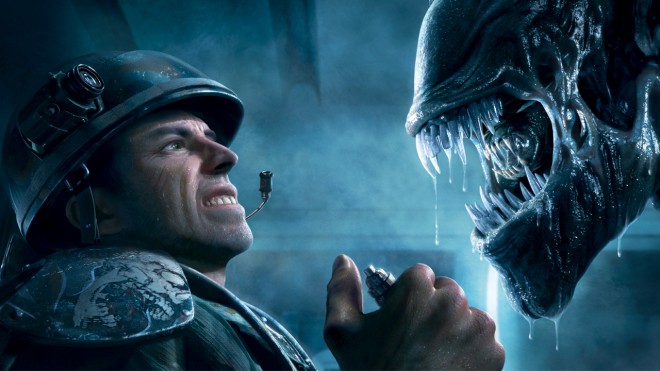 I had many issues with Alien: Colonial Marines, from buggy and stupid AI, to common textures and glitches. You may be asking, “why is he still playing after giving it such a low score?” Well, the season pass bears “free” DLC, with this first one dropping last March 19th, so, really, there’s nothing to lose. Surprisingly, for all you Alien fans out there who were still hoping for something to shimmer out of the game, you may be in luck.

Like in any survival/horde type of game mode, the abilities of the AI to counter measure your own moves are crucial. To dumb the mode down is boring, to make it too difficult is a nuisance. I don’t know what happened in the development of A:CM, but after playing Bug Hunt, I am fully convinced that both the game and this DLC were made by completely different developers. If you recall, in the review, I stated that the AI would play dumb. You would literally be able to sit there on the hardest difficulty and shoot away at a Xeno without having too much to fear. Given that I only play in a party of two, the AI on Recruit (the easiest difficulty) in Bug Hunt mode gave one heck of a fight. The first few waves, like always, will have extremely easy enemies, however, after wave 10, the Aliens really do start to get a bit more clever.

Unlike in Story Co-op, where Aliens had to spawn from one point, the maps have a ton of different points that they can spawn in. In a room with a single entrance, Aliens will leap out of well placed and hidden ventallation shafts. If you damage them enough, they’ll try to manauver their way out and hide in cover for a bit. The lurkers are the most common enemies, and they will use stealth to their advantage. There are also spitters, which will tend to stay as far back and as hidden as possible while they spit Acid. As waves go on, Xenos’ appearances and behavior continue to change. All those custom heads and color in the Xeno’s Appearance menu make an appearance, with each acting differently from one another. That means that each wave is never as easy as the last wave, and tactics will continue to change as the Xeno’s do.

This game mode does also feature Weyland Yutani Soldiers, which I know were a nuisance for many in the Campaign, but let me tell you, the mix between the Aliens and the Soldiers is great. At times, you’ll be wishing for them to spawn just to give you enough time to move to another point of the map or to even distract the Aliens. These guys will mostly carry their standard gun, but sometimes brute versions holding smart guns will spawn. This is when the real action happens. They are great and well-fitted into the mode.

Sadly, the mode doesn’t make use of either the Crusher or the Boiler, which is a shame, as one per level would have been a great boss/hazard.

I’m going to come out and say it. Bug Hunt mode is a complete rip-off of Call of Duty’s Zombies mode, but with some changes. The idea of Hode mode has always existed, but I don’t recall ever playing one before Call of Duty: World at War that had a currency system that could be used to buy guns, unlocks doors, and even close off windows. Does that make it a bad thing for A:CM, though? Absolutely not!

Everyone spawns with no cash and the only way of getting it is through killing Xeno’s or Wey Soldiers. Once a player has accumulated enough money, they can begin to open doors to new areas, which will have other doors along with ammo crates, turrets, smart guns, ect. The money system is a double edged sword, however. If your in a game with no microphones, good luck trying to progress far enough and planning out good tactics. This isn’t a mode where a mic is optional, it’s absolutely needed. While being able to speak to others, it’s easy to coordinate where you’ll go next and how the money will be spent. I’ve played with a few randoms, and unlike in CoD: Zombies there’s an option to give other players money. In a no-mic game, money is nearly never given, but with coordination, doors can be opened quickly and defenses can work properly. Teamwork is crucial and it’s much easier to progress when everyone is doing what they are suppose to be doing. Turrets are a must in this game, as once you reach wave 20+, Xeno Warriors, Lurkers, and Spitters will literally pile (10+) into the room you are in and swarm up on you, resulting in a continuous and non-stop brutal melee attacks.

This mode, though, is very forgiving if you have at least $1000 when you die. If you do, you’ll be able to buy your way back into the match until a wave is completed (I think). Friends can luckily revive you if your revive meter is still up and running.

I was worried about the maps being extremely small, considering that the DLC size was less than 200MB. It pretty much reuses the game assets, but I have to say they still feel new and are probably the best levels in the game. Each level starts you out in small, yet open areas. You’re given many choices and paths to take, but the important thing is to always find a place with a good ammo and health stash. There are three levels:

Mercenary – This level takes place on The Colony, which is more accurate than the one in campaign, though not by much. Most of the travelling will be done outside with small buildings in between. Pretty much anywhere without a turret in this level is a death trap, as buildings provide little to no coverage and it’s easy to get overrun by Wey-Yu’s outside. Though, many times, you’ll be pushed into a corner fending for you’re life as the last of you’re bullets run out. These moments are perhaps the most epic and probably offer the best and closest expereince to the movie.

Broadside – This level takes place in space either on the Sephora or the Sulaco. I’m not entirely sure. It’s extremely close quarters, which is great, as you can easily mow down swarms of enemies in the small corridors. There’s a hanger with a stationed ship, which is a nice detailed item, and elevators are shutdown and broken with their tops open so Aliens and Wey-yu’s can jump down.

Tribute – The nice thing about this level is that it takes place on Hadley’s Hope pre-detonation (from the films and thus the name “Tribute”). While the other levels are either mostly focused outside or inside, Tribute makes good use of both options. You can either continue fighting and progress throughout the facility, or you can take the alternate route and progress through the backside, moving closer and closer to the atmosphere processing station reactor that is located at the back of the level. Be warned, though. Being outside increases the chances of death. As Newt would say, “they mostly come out at night… mostly”.

Either way, all these levels are nicely done, and despite the graphics looking ugly in this game, you can’t help but notice all the small details that were actually added compared to the campaign. At least we know that more effort is going into the DLC.

The only thing that I could honestly be disappointed with this DLC is the lack of trophies/achievements, or at least new unlocks. After going through all 30 waves, it would have been nice if we could somehow show other people what we accomplished. You do, technically, unlock additional starting points for levels when you complete all 30 waves. So, rather than starting off on wave one, you can select, say, Mercenary at wave 10 or 20. Honestly though, this isn’t much to be excited about, unless you want to get your face raped on wave 20 with only a tiny amount of money.

Overall, Bug Hunt mode is a great and – to a surprise – a well-made addition to the game. If you do plan on getting this DLC, I say go for the Season Pass. The DLC itself is set at a steep price of $15 with three more coming, so it’s probably better just to get the $30 pass. I, for one, felt that the money spent was well worth it.

Rumors Suggest The Next Call of Duty will be Called “Call of Duty: Ghosts,” Details