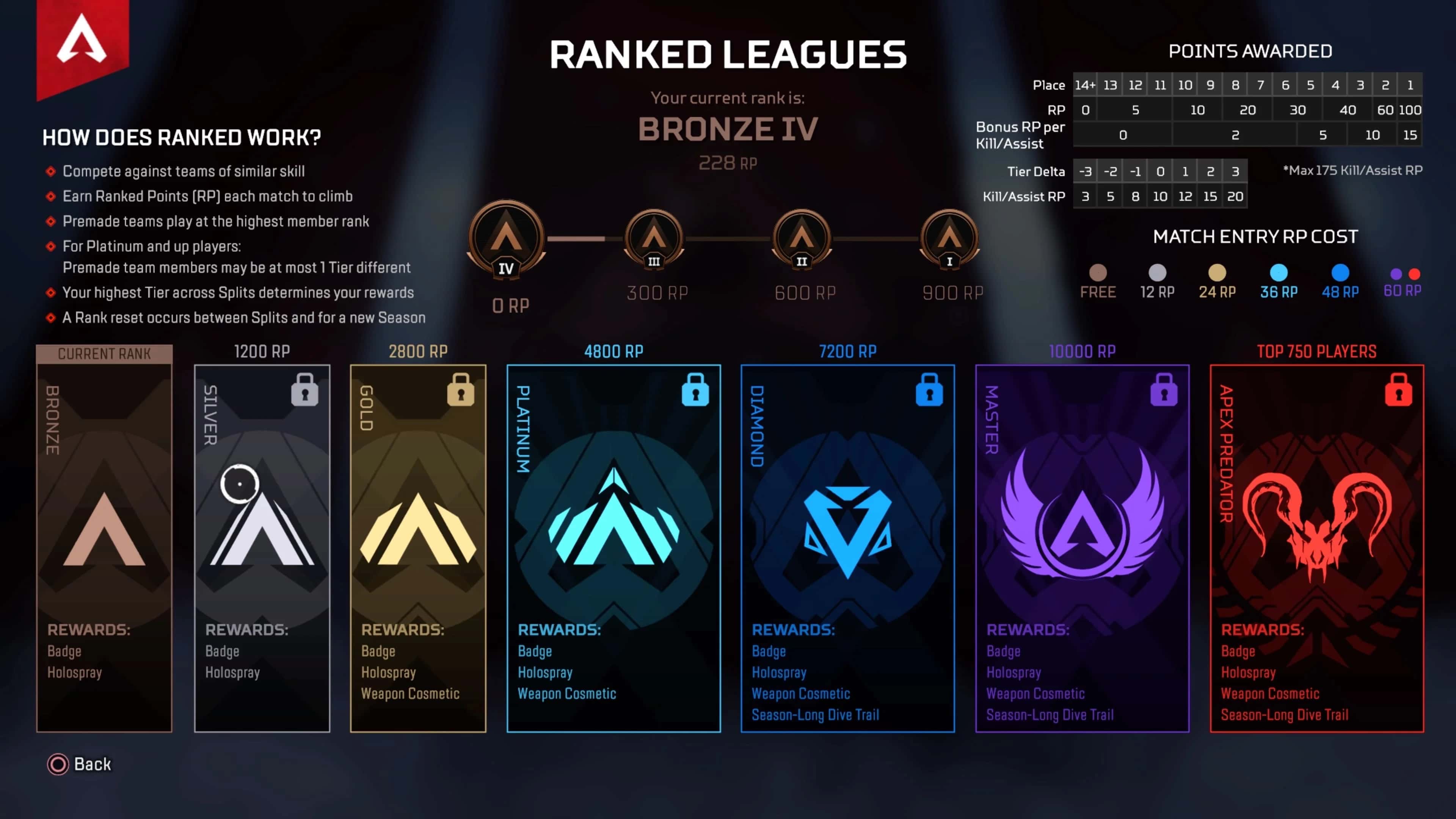 Respawn is shaking up Ranked Play in Apex Legends with the start of the Saviors title update incoming next week! According to the studio, this is the “first of several steps” they are taking to improved Ranked for everyone. Read on for the Apex Legends Ranked Play changes (and there’s a LOT).

Greetings, we are excited to share updates to Apex legends Ranked in Saviors!

Apex Legends’ battle royale Ranked queue began in Season 2, and since then, the player base has grown and matured significantly. In turn, the Ranked experience needs to evolve, and the launch of Saviors introduces the first of several steps we are taking to improve Ranked for everyone.

We are making a large number of changes that focus around these two core pillars, with the outcome that:

Play for the Team

At Apex Legends’ core is a team-based game, so players should be rewarded at the team level. Now everyone on a team will receive some RP when one of them gets a kill.

Play for the Win

Apex Legends is a battle royale. Survival is the primary objective, and kills are what gets you there. Placing any limits on kills rewards puts an unintended emphasis and pressure on hitting these limits. So we are taking a different approach:

NEW: Base value of each kill is worth increasingly less, down to a minimum

The current assist timer of 10 seconds is too short, allowing for simple retreats to break the timer. This creates unnecessary tension and is counterproductive to survival and winning the game.

Following up on the revive assist marker change last in Defiance, we are also adding a ‘refresh’ to assist timer when a player is revived. With this change, if an enemy you helped knock is revived and immediately downed again by one of your allies, you’ll still be eligible for an assist credit.

Your ranking is important and should be accurate when it comes to representing your current skill. Having the ability to demote out of a tier will allow a player’s skill to be reflected with more precision. In Saviors, we are introducing tier demotions with the goal of addressing the current struggle some players experience when they get promoted to a new tier but cannot climb higher in the ranks.

Demotions will create a better true distribution of skills across the ladder. Players will get demotion protection for three games. Once demotion protection is exhausted, dropping below the tier threshold will trigger a demotion penalty, dropping the player halfway down the previous division.  (I.e. Masters → 50% of Diamond 1)

Similar to Ranked Arenas, rewards will be granted based on the highest RP threshold achieved.

MODIFIED: Tier Demotion Protection available up to 3 games lost after promotion into a higher tier

NEW: Players can demote out of a tier, halfway down to the previous division. (Masters → 50% of Diamond 1)

There are two types of players within a tier: those who can consistently gain RP, and those who cannot. To smooth out this skill gap, we are adjusting entry costs across all divisions. Additionally, we are adding new entry cost breakpoints within the Master+ tiers to further filter for skill.

Modified: Entry cost increases on promotion into a new division

We simplified and adjusted the Per Kill RP mechanics, and are now directly presenting the base kill values by placements.

In a battle royale, placing worse than the bottom half of the lobby is losing. Placements and kills are both important metrics in Ranked. Having kills without the placement should not constitute a success. In response, we have pulled down Kill RP gains for placing worse than 10th. Players placed in this region are likely to lose RP.

At the same time, having good placements with little to no kills will cause players to miss out on a majority of their RP rewards coming from the previously mentioned Kill RP changes.

With the introduction of scaling entry costs and kill participations, we are softening the skill based RP modifiers on kills.

Bronze was the only tier without an entry cost. Any invested player would eventually climb out of it. So we are introducing a new tier: Rookie. This tier will sit below Bronze to act as a proper one time only, introductory tier to Ranked, and will not have any Ranked rewards associated with it. Existing players are unaffected by the introduction of the Rookie Tier, and can not be demoted into it, and likewise will not be reset into it on new splits or seasons.

To account for the increased influx of RP, we are adjusting RP thresholds for each tier and division to keep the difficulty and effort to achieve them relatively the same.

Modified: RP thresholds for all tiers and division adjusted. Length of each division is increased by 200RP

We have fixed a long standing issue where kill credits were unintentionally transferred from eliminated teams. Previously, when Team A downs players from Team B, and Team A is subsequently eliminated, players from any team can misappropriate these downed players on Team B for kill credits by executing them, regardless of their involvement in the initial conflict. This issue has been fixed and these kills are now properly voided. Kills are earned, not given.

This update is the first step in our ongoing journey to evolve and improve the Ranked experience. We’re excited for you all to get a chance to play with these changes when Saviors launches on May 10th.

Thank you for reading, and playing!

Once the official patch notes are out, we’ll be sure to let our readers know. Check out the reveal of the upcoming legend, Newcastle, right here.