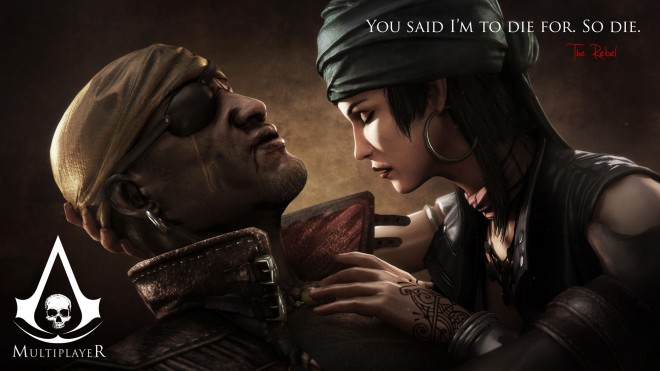 A pirate’s life is hard. Especially when there are others out to stab you in the back. Assassin’s Creed IV: Black Flag brings the same AC multiplayer you know and love to the next-generation and into a brand new setting.

Our friends over at VG247 have the scoop on some of the new co-operative elements that Ubisoft is brining to ACIV:BF this fall.

One of the game’s new key features called Gamelab allows gamers to create their own multiplayer adventures with over 200 customizable elements.

“We really wanted to give more power to our community this year,” said Director Damien Kieken. “This is the fourth multiplayer instalment, and we really asked ourselves, ‘What can we do this year to please the community, to make them happy? Where can we go?’

“One of the answers was just to give them the content, to let them do what they want.”

Players will be able to alter templates and tweak modes to their liking. For example, players could set up a “Pistolier” where melee kills are turned off. Players can only use pistols as a means of longer-distance killing. Gamelabs can also be shared with friends and uploaded to the community.

ACIV:BF’s Wolfpack co-operative mode is getting a heavy face lift and will no longer simply be a “linear experience” with a “story wrapper”, according to Kieken.

You and up to three other players will be able to start things off in the Discovery mode, a tutorial of sorts that will help you get familiar with the game’s mechanics. Once you’re feeling ready, you and your buddies can venture off into the Unleashed mode where you will attempt to “attain as high a sequence as possible by lining up multi-kills and synched kills, defending chests, eliminating disguised enemies, beating infected opponents and more,” says VG247’s Patrick Garratt.

Check out the gameplay demo below to watch ACIV:BF’s Wolfpack co-op mode in action, including modes like Wolfkill and Infection.

Are you pumped for Assassin’s Creed IV: Black Flag multiplayer? While you leave your thoughts below, be sure to check out some of these new screens and pieces of concept art.

Assassin’s Creed IV: Black Flag drops this October 29 on the Xbox 360, PlayStation 3 and PC, later for the Xbox One and PlayStation 4.