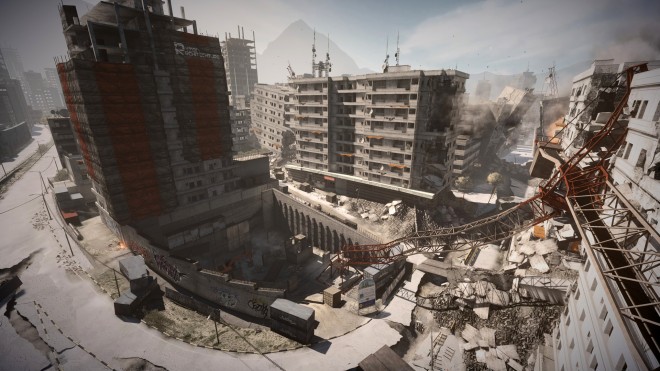 While a multiplayer expansion at its core, in a sense, it also happens to be an expansion of the single player campaign. As you might know by now, Aftermath takes place in Tehran at generally the same moment when soldiers begin to regain consciousness and their bearings after the devastating earthquake that took place the single player campaign (the one that killed you early on in the story).

Speaking with VG247, Mcleod touches on Aftermath’s inspiration. “When we thought about the singe-player, we looked at that moment and about how your character and other people left the scene, but then what about the people who are still there? We wanted people to see the other side of that earthquake.” He continued, “that’s really where the theme was coined from, and we’ve really carried this through with what we’ve done in Aftermath. You have the maps, obviously, which have war-torn buildings, the streets are all cracked up. That is all shown in the environment.”

Compared to the previous Battlefield 3 and DLC maps that we’ve already come to know and love, the locales in Aftermath offer a very different style of gameplay, something that provided the developers over at DICE with their fair share of challenges. Mcleod explains, “yeah, the new levels were kind of tricky to design to be perfectly honest. The reason for this is that we usually start off with clean-cut levels, then the destruction kicks in and you see its transformation. With this we’re coming in at the end of an earthquake so it’s already destroyed.”

With so much destruction having already taken place, you may be asking yourselves, will there be any room left for player-initiated destruction with what’s left in the aftermath? Mcleod admits, “It was a challenge to sort of improve that, but we’re still adding destruction to it – we’re still doing more. You can still collapse buildings, and on one of our levels, one of the monuments collapses, which can also take out enemies by the way.”

I can safely say that there’s still as much destruction on these maps, as there are in our previous maps. Another great thing that the earthquake theme has allowed us to do is to create more verticality with out levels. You have street level, but then you have the fissures in the roads that then create a lower level for people, so that they can sort of hide and take cover in there. You then have balconies, and buildings which you can get into, giving you an even higher level. So you really need to think about what’s on your level, but also what’s above and below you as well.”

Speaking of map design, Mcleod also named all four Afthermath maps while speaking to VG247: “Well, just as a quick overview of what’s in the Aftermath pack, we’ have four new maps, which is Epicenter and Markaz Monolith, Saadi Palace – which is focused around a big, ruined parliament building – and we have Telemarket, which is like this hillside village.”

When asked about the craving that many Battlefield fans seem to have over a dinosaur-themed expansion pack, Mcleod answered, “I’ve seen that yeah. I think each game gets it’s kind of little…quirk that players like.” Luckily for you dino-fans, he adds, “we understand this and actually, we do have one hidden Easter Egg which is along this theme in Aftermath for players to find.”

We know we’ll be on the lookout! We also know that you can catch the full Battlefield 3: Aftermath preview right here! Reading not your thing? You can also check our our video preview!

In the comments below, let us know what excites you most about Battlefield 3: Aftermath, releasing November 27 for PS3 Battlefield 3 Premium members and later in December for everyone else.