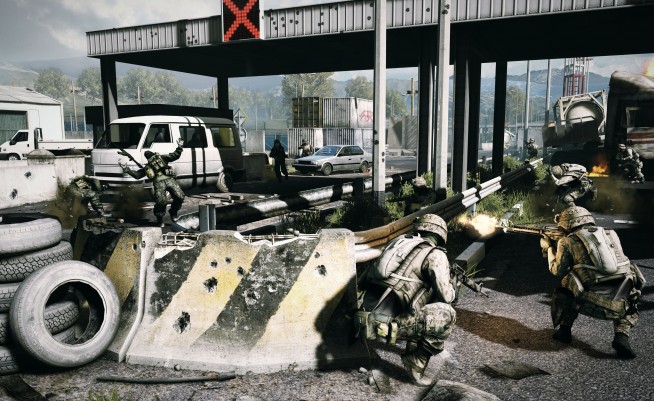 By now, DICE’s inboxes, twitter/reddit/battlelog feeds are probably filling up rather quickly with the many bugs and glitches that are currently in the Battlefield 3 Beta. However, we are starting to receive confirmation of many things that DICE is looking into and that they’re promising to fix by October 25th. Some of these include the mute function and modifications to weapon damage, specifically, the personal defence weapons (PDWs). Here are some other issues that can be found here on the Battlefield Blog.

Many would agree that some of the best, go-to weapons in the Beta, currently, are the PDW or multi-class weapons like the PP-2000 or the UMP-45. The reason why is because they work well, almost too well. Complaints are beginning to rise that these weapons are too effective and make some of the starting weapons like the AK-74 variants or M4/M16 seem obsolete. DICE has taken notice, as Alan Kertz, Senior Gameplay Designer, stated that the “PDWs have been adjusted.” He continued, “…we are aware of the feedback and will continue to support BF3.“

On the other end of the spectrum, some have complained that the AS VAL is too underpowered and should not have been included as a PDW. Kertz confirmed that “It’s a PDW at high level, and it’s role has changed to be more like the VSS from BC2, though not as powerful.“

These feature won’t be making it into the beta, as we have reported earlier that it won’t be seeing any more updates.

What do you think about the current state of the PDWs or multi-class weapons? Which ones do you find under/over-powered? Let us know in the comment section below.

In other news, DICE has hinted yet again at the Caspian Border multiplayer map making it to the console Beta. Battlefield tweeted when asked if Xbox or PS3 users could play on Caspian Border, “On the open beta, unfortunately no official word yet!” It’s just plain strange that there is “no official word yet” when we are two days away from the end of the Beta. If any announcement were to be made, it should be made soon, unless they were to extend the Beta.

On a final note, some have been looking for clarification on the matter of claymores. One fan asked Kertz if claymores are supposed to disappear after death, or if it is just a bug. Kertz clarified that they disappear “5 sec after your death. Balance issue.“

Make sure to check out our 15 Battlefield 3 Tips to Improve Your Game and follow @MPFirst on Twitter for more Battlefield 3 news!