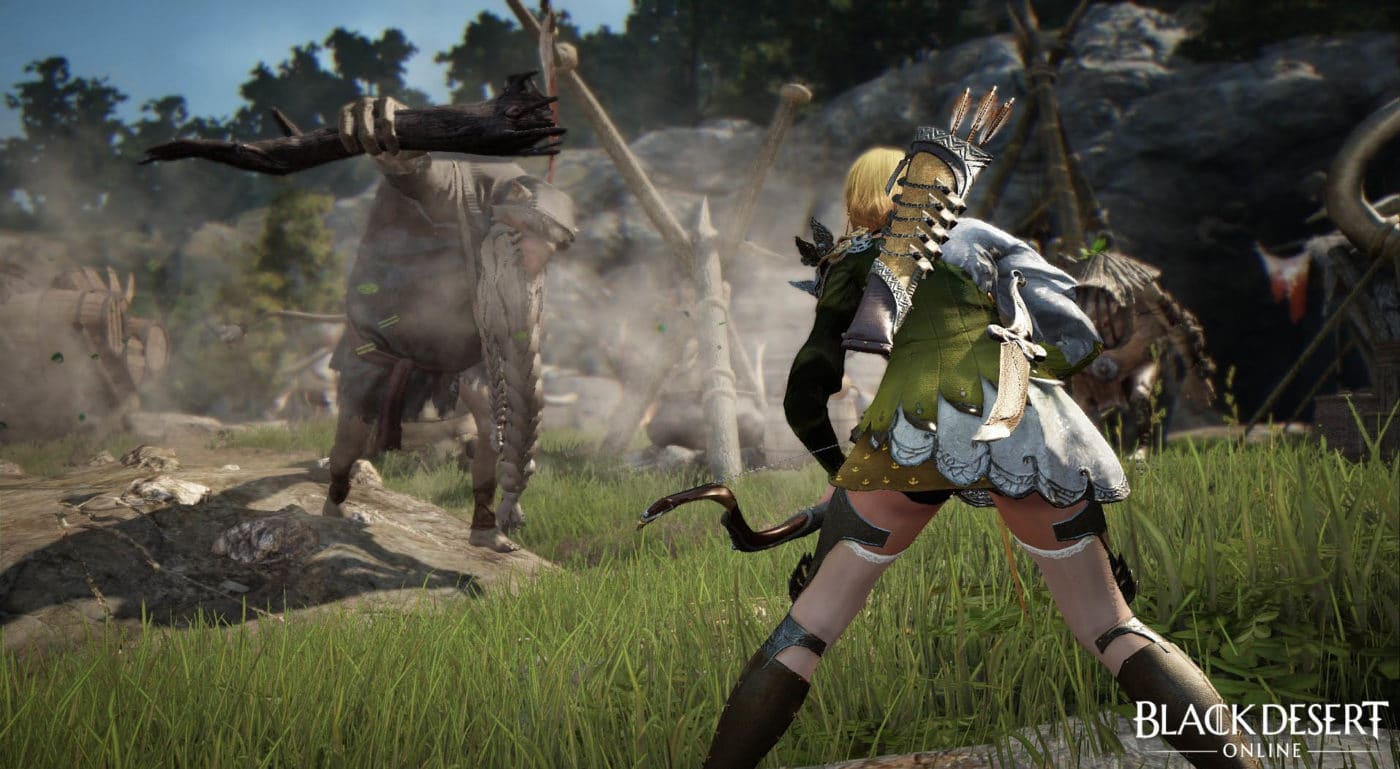 Black Desert Online console players, Pearl Abyss has released the Black Desert Online update 1.46 July 8 patch, and it brings Cron meals and Draughts, and lot of other gameplay changes and fixes. Read on below for the complete notes.

The latest update to Black Desert is here, bringing with it Hashashin pre-creation, Cron Meals, Draughts and more! Check out all the details below!

The sands of Valencia hide many dangers, yet there is none more dangerous that the Hashashin. The curved blade of Aal is making his way into Black Desert, and you will be able to create your Hashashin in preparation of his release in the next update. Pre-creating your character will give you rewards that you can use to kick start your adventures, and you can find out more in the event notice [LINK]

Cron Meals and Draughts can now be crafted in game. These consumable items offer incredibly powerful buffs for your character and can be made through simple cooking or simple alchemy.

Cron meals require the new ingredient, Ancient Cron Spice, which can be purchased from Cooking Merchants or Inn Keepers across the Black Desert world. By combining this ancient spice with certain meals, you can create a variety of different meals

● All Cron Meals Effects will last 120 minutes and have a cooldown of 30 minutes.
● It is possible to use Special meals in replacement of normal meals. For example, instead of using Balenos Meal x3, you can use Special Balenos Meal x1.
● The life skill mastery effect of Seafood Cron Meal is currently not in effect, and will come into effect when Life Skill Mastery is added.

Draughts require the use of the ‘Tears of the Falling Moon’ item which can be purchased from Old Moon Manager NPC’s. By combining this item with certain Elixirs, you can create the following draughts:

● All draught effects last 15 minutes and have a cool down of 10 seconds
● Certain Blue potions can be substituted into the crafting recipes of these draughts.

Cron Meals and Draughts can be used in conjunction with each other. Cron Meals will not stack with any other meal, whereas Draughts will only stack with certain other consumable elixirs.

Draughts can be used in conjunction with the following items:

As Cron Meals and Draughts generally do not stack, the following interactions occur with other consumable items:

The first ‘Book of Margahn’ has been uncovered, which unlocks the word of Agris, the god of abundance`. To start work on this adventure log, you will need to obtain and complete the quest, ‘Adventure Log: Agris, the Ancient Secret’ from the Black Spirit, then talk with Edan to obtain the ‘Book of Margahan’. In order to accept this quest, you will need to be on a character that is level 60 or above.

Once completing the ‘Book of Margahan’ Volume 1, Agris Fever will be unlocked, and can be used by any character on your account.

While Agris Fever points are available, killing certain monsters across Black Desert will consume Agris Fever points. Points will be consumed differently depending on the type of monsters that you kill, and the consumption of points will give you up to a 100% increase to the vendor items that monster drops.

Dev Note:
Agris Fever was designed for adventurers who enjoy fighting monsters for short periods of time each day. You can unlock the Agris Fever content by offering tribute through the Adventure Log to Agris, the Balenosian ancient god of prosperity. Regardless of whether you’ve logged into the game or not, you will recover a fixed amount of points every day at a specific time, which will be consumed to grant a buff increasing the amount of trash item drops when defeating monsters.

Our intention with the Agris Fever was to not override the existing buffs that exist for killing monsters (such as food, elixirs, scrolls etc), but instead provide something that synergizes with these effects. We hope that this proves to be a successful endeavor, and allow those with a short amount of time each day to play a way to generate silver.

Points Consumed per Monster Kill
Points consumed on Monster kills varies depending on the type of monster killed. The following tables indicate how many points are consumed per kill:

In conjunction with the Agris fever buffs, we are also increasing the value of certain vendor items in Black Desert.

Note:
●Trash loot that is still in your inventory as the maintenance starts will be converted into silver at the old prices, and that silver will be sent to your mail.

Shultz Guard Captain Kunga has come into the possession of some incredibly well-crafted armors and weapons and has used this haul to strengthen his troops in the Shultz Guard Garrison. This one semi-challenging encounter has now become and incredibly dangerous place for wandering adventurers.

The AP and DP of monsters at Shultz Guard has been greatly increased, and the quality of items that can drop in the area have also been improved. The area is now a recommended 240 AP, up from 130 – 190 AP. While fighting in this region, the Shultz Guard Captain Kunga has a chance to appear, offering a challenging fight for any adventurer foolish enough to step into his domain.

The Armor Fragment vendor item that drops in this area will only drop in single units but is value has greatly increased.

Other Monster Changes
● The abnormal positioning of some ‘Lateh’s Tomb’ locations (night time) in Sherekhan Necropolis has been fixed.
● Main Story Quest boss monsters in Balenos, Serendia, Calpheon and Mediah have had their attack and defensive stats increased.
● Reduced the amount of time it takes for the following monsters in the following regions to reappear: Quest Barracks in Cron Castle, Al Rhundi soldiers and object-type monsters in castle ruins, Harpy and Harpy Warriors in Delphe Knights Castle.
● Increased the number of quest-required Barracks in Cron Castle● Fixed an issue where World Bosses would spawn all 4 in sequence.
● Balenos and Serendia Tax Wagons have been changed so they can no longer be destroyed.

Since ‘Laila’s Petal’ can be obtained at any level, we are adding extra tooltips to the item that will explain the pre-requisites to obtaining a fairy.

Golden Seals
Seals gained from completing Imperial activities (Delivery, Trade etc) have been improved by royal decree. By completing tasks associated with the Imperial system, you will now receive Golden Seals, which can be exchanged for new items.

With these new seals, we will stop distributing the Shiny Golden Seals, but fear not, you will still be able to exchange them with the relevant NPCs. The old Shiny Golden Seals will remain in your inventories and can be exchanged for the same items as before.

Other Item Changes
● Fixed an issue where Armor Fragment (Vendor Item) from Shultz Guard would set a path to an unnecessary NPC.
● The item grade of the ‘Design: Epheria Sailboat’ has been changed to be the same as the ‘Design: Epheria Frigate’ (both are now White Grade items).
● You can now exchange multiple ‘[Guild] Clearance Permits’ in one action. We have also added the ability for guild managers in Duvencrune and Grana to be able to perform this action. ● Fairy’s Blessing can now be used to apply Enhancement Chance in the Enhancement Window.
● The ‘Hedgehog’ pet gathering ability will now activate on the following resources:
Rainbow Stone, Strange Rock, Coal, Opal, Clear Quartz, Red Quartz, Green Quartz, Black Quartz, Blue Crystal, Violet Crystal

Blue grade gear has been added for Sailboats. The blue grade gear can be crafted and enhanced similarly to other blue life skill gear (i.e fishing rods), and provide bonuses to improve your Sailboats damage, speed etc. The following items are now available:

To reduce some of the time it takes to get from place to place in the main story quest, we have added the ‘Traveler’s Map’ to certain quests in the Calpheon, Mediah and Valencia story lines. A ‘Traveler’s Map’ is a one time use item that will take you to the nearest town and has a 6 hour cooldown time. The following quests have had this item added to their reward table:

The quests required to start Igor Bartali’s Adventure Log have been added to the suggested quest tab in the quest menu. This change will also be applied to any future Adventure Log that is added to the game, including the upcoming ‘Book of Marghan’.

We have also made it easier to complete Main Story quests which require eaves dropping. These quests often tripped up newer users to Black Desert, so we have tried to make them more accessible.

● The crafting notes will now have a search function, allowing you to find exactly what you need in the crafting notes window. This search will need to use the full name of the item, as well as the search being case-sensitive. We will improve this function in a later update.
● In the character creation screen, Warrior will now always appear as the first option.
● Made the knowledge rank colors for Knowledge (Ecology) more uniform.
● Fixed an issue where the order of the character select window would occasionally reset.
● Added a tooltip in the fairy window that if a fairy has reached the highest level, it can be rebirthed.
● Added a durability notification to display a big ship when the ships equipment is running low on durability.
● Fixed an issue with overlapping text in the Guild House Auction UI.
● Fixed an issue where Shipyard level 3 would show an incorrect production list.
● New display settings have been added. Both these settings can be found in the Display Settings menu.
Display Quality > Show Blood Splatter, Show Bloodstains

Three new hairstyles have been added to each of the male classes. These hairstyles will be available in the customization window after this update.

● Improved Shield Chase so that it flows better with Righteous Charge

● Fixed an issue where text would overlap in the housing window.

Yep, the Black Desert Online update 1.46 July 8 patch brought a lot of new stuff! So go and enjoy it now.