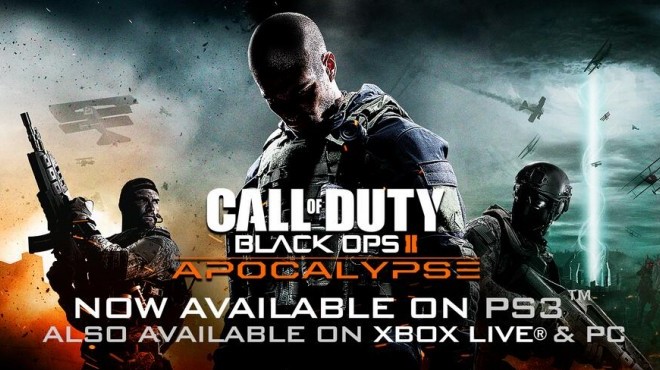 Black Ops 2 Apocalypse is now available for $14.99 via the in-game store. Season pass owners can, of course, download the four new maps and new Zombies map at no additional cost.

Don’t forget, this weekend is Double Weapon XP. It starts tomorrow, September 26, at 10am PDT.

Fans of “Stadium” from the original Call of Duty®: Black Ops First Strike DLC will find themselves at home on “Takeoff.” Marooned in the middle of the Pacific Ocean, this remote launch site is all about close-quarters combat, combining tight corners with open spaces for intense encounters.

An adaptation of the fan-favorite “Courtyard” from Call of Duty®: World at War, where two archeological dig sites in Afghanistan become the perfect playground for combatants eager for hectic, unceasing confrontations. Treyarch, has retained the spirit of “Courtyard” with two major chokepoints, a wide open layout and raised platforms, but has provided fans with a fresh take on the multitude of paths.

Apocalypse also features Origins, the most horrifying and imaginative Zombies experience to date. Players will be deployed to a Dieselpunk-stylized World War I-era France where they will encounter the return of the four original heroes – Tank, Nikolai, Takeo, and Richtofen – from the very first Zombies map featured in Call of Duty: World at War, as well as hordes of undead that have overrun the French countryside’s trenches and fields, as well as the ruins of an ancient and mysterious location.