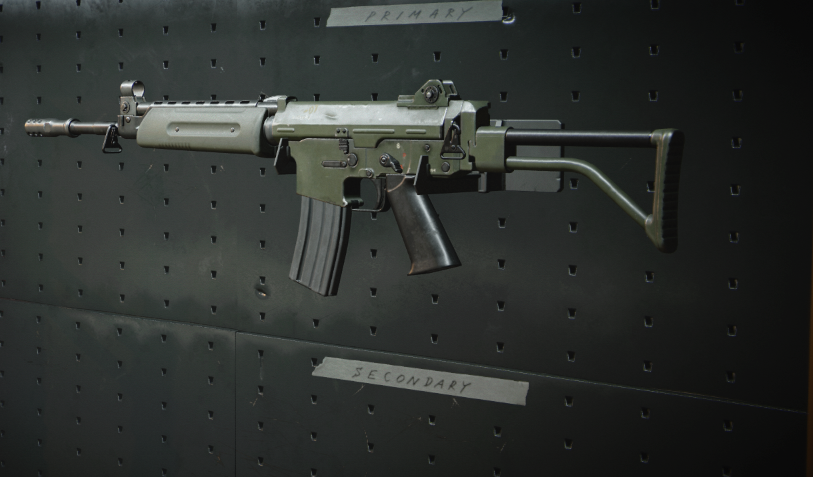 Those looking for a little bit of help in building gun loadouts, we’re here to help with the Call of Duty Black Ops Cold War Krig 6 gun guide! Check out which attachments to use, which ones to avoid and more.

Thanks to Korean YouTuber Tiny wolf’s Gaming for the gun guide below, so make sure to check his YouTube channel. We’ll be featuring his gun guides more soon as well.

Boasting the longest range for an AR (the same as LMGs), I’d say that for all of KRIG 6’s shortcomings, this is a neat feature.

This gun has the slowest TTK among the fully automatic weapons, and its headshot efficiency is also really bad.

It’s pretty common to find Youtubers using this gun (among others with lower ttk) for clickbait to say stuff like, “SHREDS” and “MELTS ENEMIES”. Some of the information I’m going to share below might make that seem possible, especially with the low recoil and stuff. However, without headshots, the TTK on this gun is even slower than 1911 and DIAMATTI’s…

Fully automatic rifle getting out performed by pistols? Ouch.

Headshot efficiency is actually good, though. With one headshot its TTK can get faster than any other AR, to a point. Once you start getting more than 3 headshots, other ARs start to pass it. However those first couple of headshots let Krig 6 compete with even some SMGs, let alone other ARs.

Overall this makes the gun pretty worthless if you can’t get headshots, but a fair choice if you’re able to nail them consistently.

Vertical recoil is the best among all of the ARs, and Horizontal is second best (only behind XM4 and still pretty close to that). From far away the pattern appears to go up and to the right, but if you get close you can see that some of the bullets go just a little bit to the left.

Which is to say that the TTK is already freakin’ long and getting headshots doesn’t really help much.

As I’ve mentioned, KRIG 6 has VERY slow TTK. Of course the range is good, but LMGs have the same range and kill much faster. Other ARs might have shorter range but are more mobile, versatile, and take enemies out more quickly.

For Krig 6 to be viable, it needs at least one headshot. It’s not that hard to get, but it’s not something that you can just consistently do natrually.

So what’s the best way to run this gun?

Rather than everybody just going around and playing with MP5 and AUG, I think that we, as a community, should take more difficult guns like this one and try to figure them out. To make them viable. So with KRIG 6, you need to keep the distance long. Camping is a great way to do this, but LMGs do it better.

So what I recommend doing is what I call semi-camping. Find cover, and using that cover to check your surroundings. Be aware of the map and the current situation. Try to figure out a place that is tactically important- Somewhere an enemy can flank your allies, or maybe a place they have to pass to capture a point. Move from cover to cover like that. Taking the time to assess the situation and keeping those important locations in mind as you do so, kill one or two enemies, move to the next cover.

This is where KRIG’s low recoil feature really shines. If enemies hide in cover to just peak, you have a better chance of winning. If they know you are hiding, so they pre-aim, dropshot, jump shot, your low recoil will let you trace their movements fluidly. And changing your cover every couple of kills makes you less predictable, so they’ll pre-aim the wrong cover.

I highly recommend running an optic. I feel like the visual recoil is really bad in Cold War compared to other COD games, and the iron sights aren’t really that good. They just don’t feel that accurate to me. Both as a gamer and as a veteran who’s used a real AR. Some of the scopes and other sights are good in this game, but the default iron sights are super trash.

In close combat it can’t compete with SMGs or other ARs. So, again, you’ve really got to keep a good amount of distance between your enemy during combat. That’s why I sacrifice stats that are needed for run and gun playstyles (hipfire, shooting movespeed, sprint out), in favor of things more useful for the semi-camping style I mentioned, like recoil control, flinch resistance, aim-walking movespeed.

The gun can have 5 attachments, but I have only listed 4. The reason is because the last part is a good one to just switch around depending on your personal preferences, or the map you get put on.

If you wanna be stealthy, a suppressor is a good option. For maps that make it difficult to see your opponents, you can use Tiger Team Spotlight. Of course an extended magazine is always a solid choice.

This attachment sacrifices one of the only strengths of KRIG while enhancing things that don’t need it.

I’ve thought about running this attachment. If TTK is the problem, increasing damage with this should be good right? But unfortunately, it’s not.

Even with the additional damage, BTK and TTK don’t even change. It’s not enough to make a difference, and by lowering the range you’re getting rid of the long range advantage KRIG has in the first place.