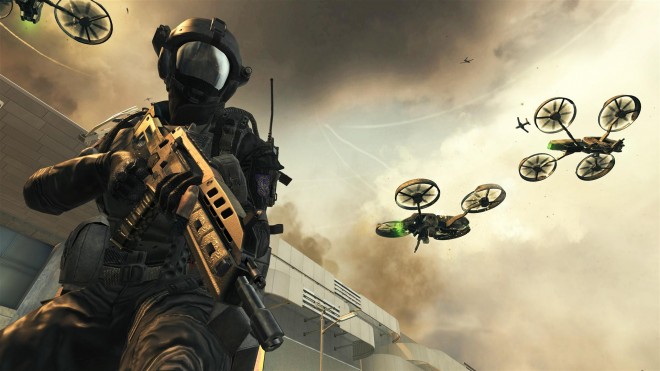 Treyarch’s John Rafacz details the reasoning behind Treyarch’s move to the near-future in Call of Duty: Black Ops II.

It’s been said before that moving to a brand new setting is one way to imitate innovation in a video game series that has stayed stagnant for too long. There are those who would criticize Treyarch for making such a move what with Black Ops II’s story being predominantly told in the near-future of the year 2025.

When asked in an interview with VG247 whether or not the move to the near-future was simply to “make call of duty interesting again,” Rafacz made it clear that “the decision to go the the future was really about answering the question: ‘what can we do to push the boundaries of story telling in a way that makes sense for us as creative professionals’.”

However, not only does the move to the year 2025 greatly effect the story-telling, it also has meaningful ramifications on the gameplay. Rafacz explains, “all the while, the near-future setting benefits us from a new realm of gameplay and weapons that ultimately benefit the players.”

Let us know in the comments below. Do you think the move to a near-future setting was simply made in order to give the Call of Duty franchise that refresher?

We can expect to hear more about Call of Duty: Black Ops II at this year’s Games Con, according to Rafacz.

In other news, Treyarch lead developer David Vonderhaar releases another audio sample of Black Ops II, leaving exactly where it’s from a mystery. We speculate it could be a rank-up sound or some sort of unlock notification in the multiplayer. Give it a listen and let us know what you think in the comments below!