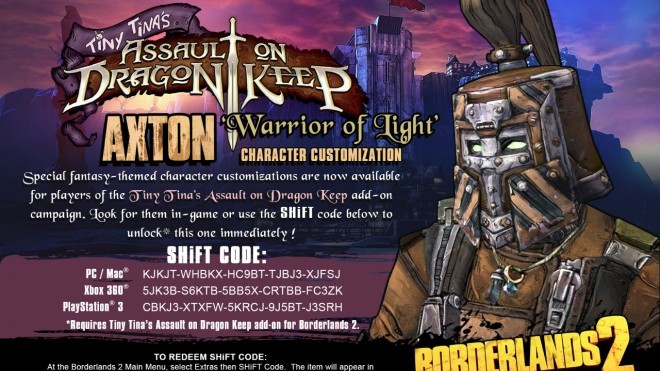 Those who’ve purchased the Tiny Tina’s Assault On Dragon Keep Borderlands 2 DLC and have been patiently waiting for the folks over at Gearbox to start releasing the customization items tied to the fourth campaign add-on won’t have to wait any longer.

As of today, a new hotfix is available for the game which gives the D-20 chests featured in Assault On Dragon Keep a chance to contain one of the new customization items. You can view all of them here, if you haven’t yet.

Luckily, those who don’t  have the time to farm these D-20 chests, trying to get a roll of a two or a three to get these customization items, can simply input special a Shift codes to unlock said items, according to Gearbox community manager, Chris F.

Catch the first code that unlocks the ‘Warrior Of Light’ head for Axton The Commando below:

Note:  Since this is a Shift code, those gaming on the Xbox 360 must have a Gold subscription in order to use them. Additionally, you must have the Assault On Dragon Keep DLC to equip these items.

Be sure to check back over at the Gearbox forums each day as a new Shift code will be released which will unlock a new Assault On Dragon Keep head for a different vault hunter.

Those looking to get your hands on the Assault On Dragon Keep skins may have to wait a bit longer, as the community manager over at Gearbox Software has revealed that there’s a slight technical issue with one of the skins (Krieg) which will be addressed via an update.

Related to previous reports announcing plans to release another Ultimate Vault Hunter Pack which will increase the level cap once again by another 11 levels, you vault hunters can start planning you level 72 builds right now, courtesy of the folks over Bl2skills.

Which Tiny Tina-related customization head are you most looking forward to getting? Let us know in the comment section below!