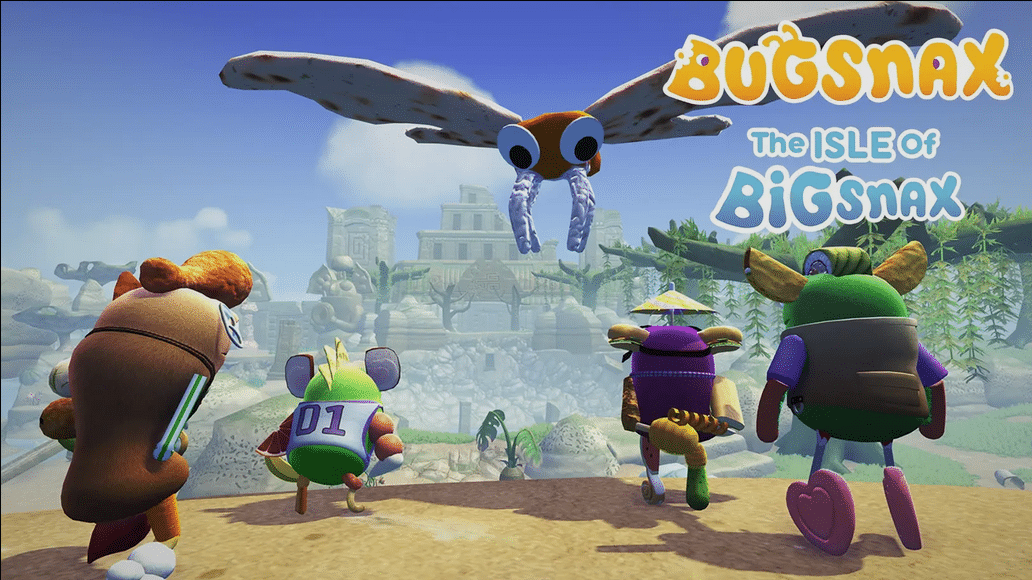 A Bugsnax upcoming update is releasing this April 28, alongside another huge piece of news: the game is also releasing on the Xbox Game Pass! As is with these new updates, check out the trailer for the “Isle of Bigsnax” below as well as the details on the game’s release for Game Pass.

The Bugsnax upcoming update is called the Isle of Bigsnax, and here are some of the features as per its official PlayStation Blog post:

The titular Isle of Bigsnax is a whole new biome to play in, twice the size of any other. The Bugsnax there are equally oversized (but more on that later). You and your fellow grumpuses are shocked when this new land mass bursts out of the ocean just off the coast of Snaktooth Island. You’ll quickly gather up a party of volunteers including Chandlo, Floofty, Triffany, and Shelda, and raft your way over to investigate its mysteries.

With this area, we put a greater emphasis on environmental puzzles that put your tools to the test. You’ll come across vertical mazes that can only be navigated with your buggy ball, and they ramp up in complexity; some are even inhabited by mischievous snax. There are also mechanical ruins that can be opened with clever use of your trip shot and its ability to spread fires. Fun fact: A temple door opening from a lit fire may sound fantastical, but we took inspiration from the works of the real-life Archimedes.

As I said, the new island is host to a collection of absolutely massive Bugsnax. They’re so large that they can ignore your usual traps and tools. So how do you catch them? Well, there’s a helpful substance on the island called Shrink Spice. If you throw it at a Bigsnak, it will shrink down to a much more manageable size, giving you an opportunity to trap it. Unfortunately the spice is extremely volatile, and once you pick it up you have 30 seconds to use it before it explodes.

Even with Shrink Spice the Bigsnax won’t be a cake-walk; they have plenty of other defenses. The Clawbsteroni (a lobster made of mac and cheese) for example uses a giant trampoline to bounce the spice away from its head. Aside from the somewhat familiar Bunger Royale, all of the snax on the island are brand new, so there’s plenty to discover about their behaviors and abilities. We had a ton of fun coming up with designs for them, and this update gave us an opportunity to fit in both bugs and foods we didn’t have room for the first time around.

Of course the island itself isn’t the only thing worth checking out in this update. Back in Snaxburg, Filbo introduces you to your very own hut. We had always wanted to give the player a home among their grumpus friends, but it was sadly left on the cutting room floor. Still, we left a half-finished hut in Snaxburg with the hopes that it could one day turn into something more.

Indeed your hut starts out as a humble pile of lumber, but over time it can become a two-floor luxury abode. You can decorate and personalize the hut with all kinds of unique furniture, wallpaper, and lawn ornaments (my favorite being a twenty-foot tall grumpus skeleton). There are around 180 decorations to collect How do you come across all these decorations? Well…

Your hut is also tied to a new set of activities delivered via mailbox. The grumpuses in town will send you requests and challenges, and every time you complete one you’ll get a thank you letter with some gifts attached. You’ll also get letters and gifts to mark various milestones throughout the game (so returning players will have quite a few built up to start with).

We’ve built these letter challenges to encourage players to explore the game in new ways. You could be tasked with observing a unique Bugsnak behavior, solving a riddle, or climbing to the highest point in a level. One of my favorites involves putting up ads for Cromdo Mart around Snaxburg. The letters are also filled with jokes, anecdotes, and secrets from your favorite grumpuses, so we hope you enjoy reading through them.

Last but not least, we’ve added Bug Hats! As you feed the grumpuses in Snaxburg, eventually the transformations cause their hats to fall off never to be worn again. You might have wondered at some point; what happened to those hats?

Well, the Bugsnax have them! Out in the wild, you can encounter a Bugsnak wearing a hat. If you catch it, the hat is yours, and you can now proudly put it on the head of any Snax in Gramble’s barn. Once you’ve found your first hat, the Hat Board will appear in Snaxburg, giving you hints on where to find the next one. We think it’s fun to have a little rare event like this shake up your bug hunt.

With the release of this new upcoming update, Bugsnax also makes its debut on Xbox via Game Pass! On its release, you can play it via Xbox consoles, PC via PC Game Pass, and cloud streaming. It’s also coming to PC via Steam on the same date.

Bugsnax: Isle of Bigsnax is coming to PS4 and PS5 for free this April 28.