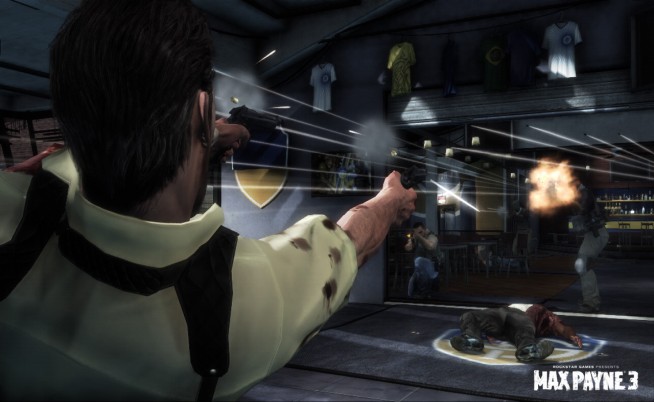 As we all know, one of Max Payne’s signature moves is his ability to slow down time while while diving through the air wielding dual pistols as be blasts through his enemies with surgical precision. The big question on many multiplayer enthusiast’s minds is how well could something like this translate over to the multiplayer portion of the upcoming Max Payne 3. According to Rockstar Games, it can.

Answering fans in a recent Q&A session, Rockstar explains that “Max Payne’s multiplayer is all about taking the physicality and tech of Max’s movement and shooting abilities and translating that directly into multiplayer in a way that fits with the overall story and the themes of the game…” In this case, it would make sense to carry the Bullet Time ability over to the MP, and luckily, Rockstar mentioned that “getting Bullet Time right in the multiplayer experience is a huge priority.” But how? How do you give players the ability to slow down time without affecting the time flow of others? Well, according to Rockstar, “Bullet Time in multiplayer works via line of sight rather than applying to the whole level, or to a bubble around the player.” Does this mean time slows down only for those in your line of sight? If so, how do these players “catch up” back to the normal time flow? It will certainly be interesting to see it in action.

Rockstar also explained that “while Bullet Time is Max’s special ability, it is just one of a range of special abilities  – called Bursts – that you’ll find in multiplayer.”

It looks like we’ll just have to wait and see exactly how Bullet Time will work out in multiplayer. For now, let us hear your thoughts! Make sure to stay tuned to MP1st for more Max Payne 3 multiplayer news.

Update: Red Dead Redemption did include the “Dead Eye” ability in multiplayer, but time was not slowed down for the shooter.