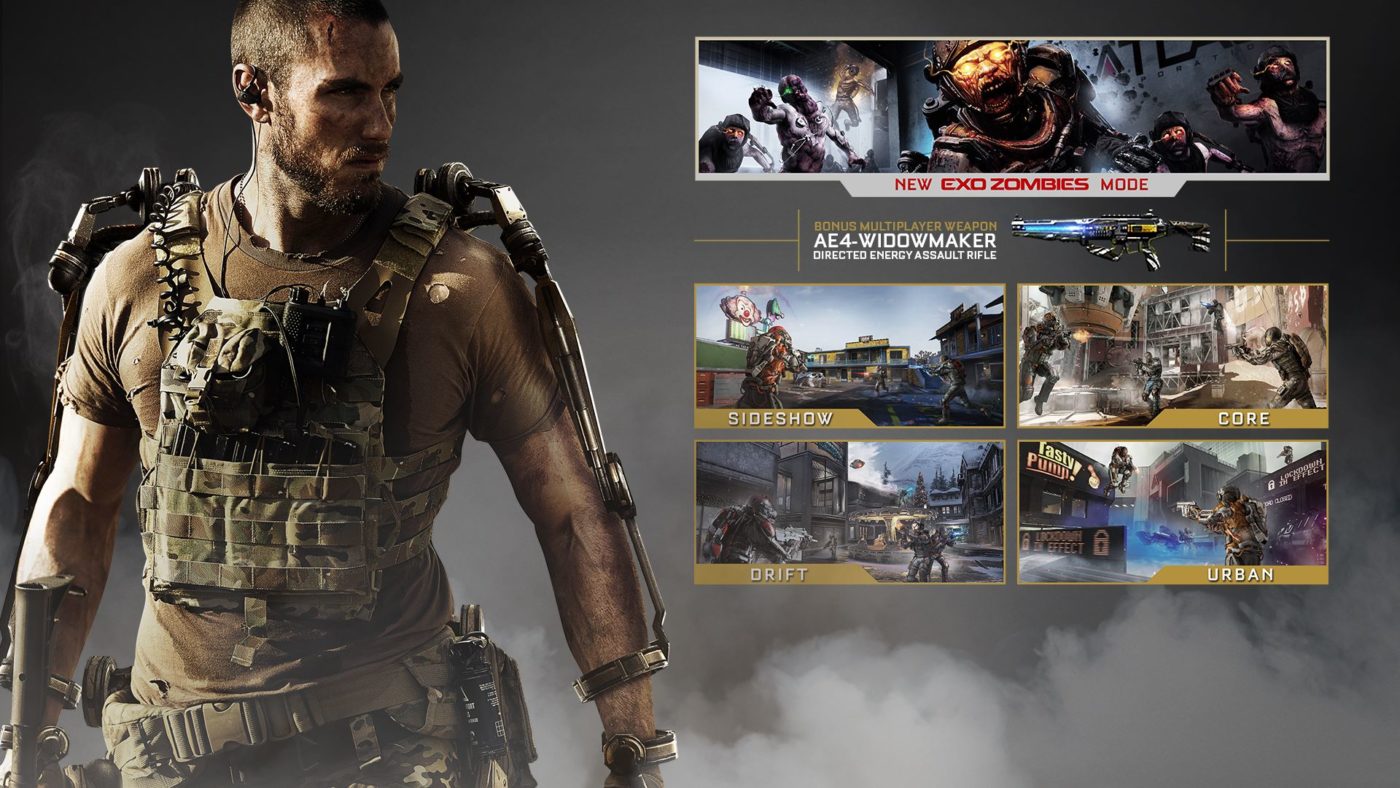 Havoc starts off Advanced Warfare’s DLC season on a high note with four completely new multiplayer maps, a new multiplayer weapons, and a new co-operative mode many Zombies fans have been waiting for. You can find it now for $14.99 USD on the PlayStation store for PlayStation 4 and PlayStation 3 or simply download it through the in-game store if you already happen to be a Season Pass owner.

Unfortunately, developer Sledgehammer Games has run into a few complications with the content’s launch on PC, forcing the studio to delay its launch. Here’s the official statement from Facebook:

“We have encountered an unexpected issue with the PC release for Call of Duty: ‪#‎AdvancedWarfare‬’s first DLC content pack, “Havoc,” and we’re holding its release until March 3rd. We don’t take this decision lightly, but rest assured that our team is working with Activision to get this content to the PC community as quickly as possible. In the meantime, we’re turning on ‪#‎DoubleXP‬ for all PC players to enjoy.”

UPDATE 1: In addition to Double XP, Sledgehammer Games is also throwing in this KVA Paramilitary Exo with a camo pattern that matches the AE-4 Widomaker free of charge as a token of appreciation. PC gamers will get it via a Supply Drop on March 3 alongside the launch of the Havoc DLC. 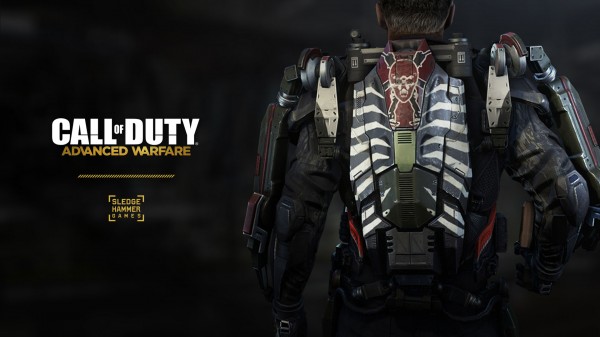 UPDATE 2: PlayStation users on both platforms will have also noticed a new downloadable game update along with the launch of the Havoc DLC. For those curious, here are the official patch notes:

Keep your sights on MP1st for updates. Meanwhile, here are a few more details on Advanced Warfare’s Havoc DLC. 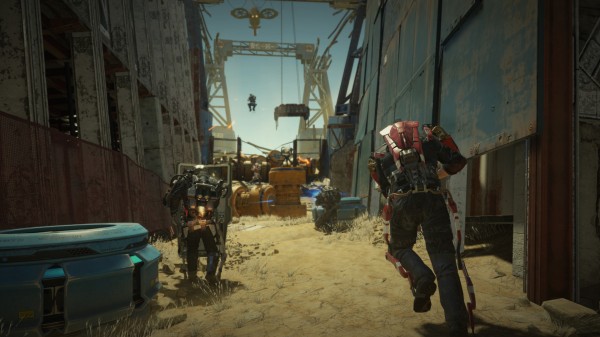 “Deploy to the Gobi desert where the ravaged ruins of a nuclear fusion plant set the stage for a high-octane warzone. Take down enemies through the wreckage in long-range combat or get up-close and personal in the tunnels surrounding the central turbine. Activate decontamination drones using the map-based scorestreak to help clean out the competition.” 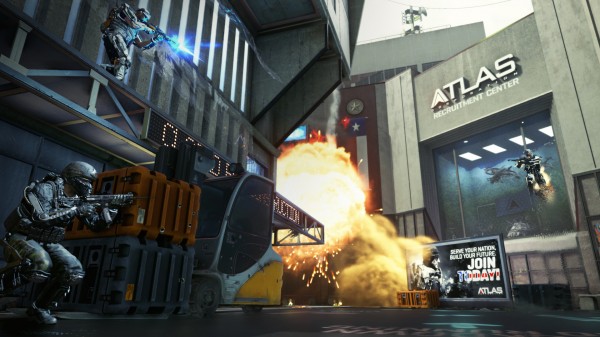 “Prepare yourself for brutal, high-speed combat in Dallas Ward 3, a future mega structure, funneling players into a close-quarters free-for-all. This modular compound’s verticality unleashes the exoskeleton’s capabilities. Stay focused during the timed event as blast doors alter the map’s flow and sightlines.” 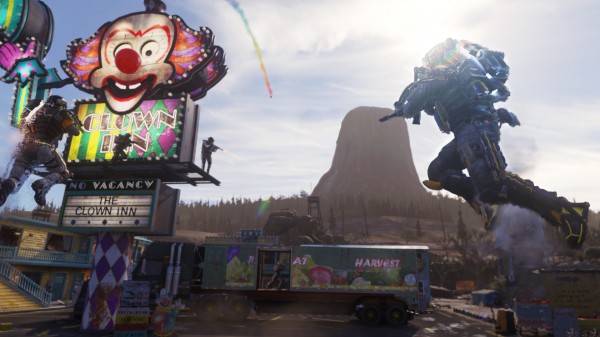 “In the shadow of Devil’s Tower, Wyoming, this abandoned inn’s open layout amplifies its creep factor. Blast your way through the clown inn with close-quarters battles or use long-range site-lines from the mining facilities and natural terrain. Use the map-based scorestreak to activate the lights, music, and magic of the clown marquee and rain down a barrage of rainbow smoke-trailed cannonballs.” 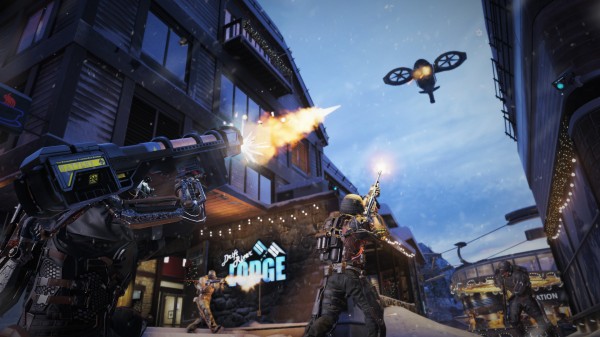 “An idyllic ski resort high in the Rocky Mountains is transformed into a festive high-altitude playground, perfect for an all-out firefight. Make your way to the highly contested over watch in the glass observation deck or take a ride on the carousel to deliver 360 degrees of carnage. Players can use the map-altering timed event to their advantage as an avalanche of snow and debris disorients players, intensifying the battle.”

“…features a story told through the eyes of four employees of the Atlas corporation, played by a celebrity cast consisting ofJohn Malkovich (In the Line of Fire, RED, Burn After Reading), Bill Paxton (Aliens, Titanic, Edge of Tomorrow), Rose McGowan(Planet Terror, Scream), and Jon Bernthal (Fury, The Walking Dead). The actors provide their voice over and likeness in a dark and cinematic experience new to Call of Duty: Advanced Warfare.”

“Players enter a world where a DNA bioweapon unexpectedly spawns a bloodthirsty, ravenous mutant horde infecting an entire secret Atlas research facility and sending personnel running for their lives. Following a failed evacuation, four survivors, un-trained and underprepared, must face the most vicious mutations ever unleashed. The Exo Zombies co-op mode ushers in a new breed of Zombies and a truly unique experience, coming first to the Havoc DLC Pack.”