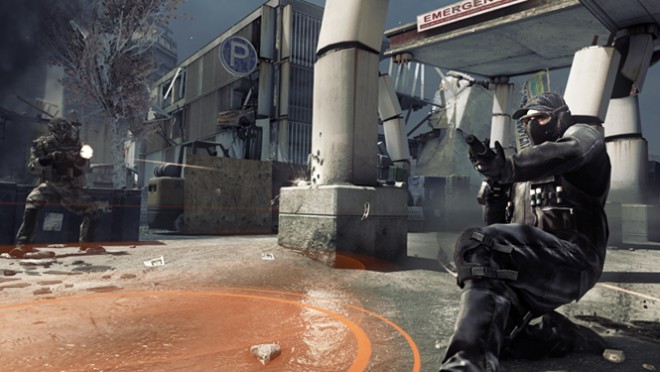 Blitz is a brand new, fast-paced game mode being introduced to the Call of Duty series with the release of Ghosts this November 5. Think of it like soccer, but where the player acts as the ball. It’s an interesting take on an objective game time, one that is sure to fit in to the already hefty roster game modes Call of Duty already boasts.

Today, developers Infinity Ward have released a few new details surrounding the Blitz, and also offer up some tips and strategies for success.

First off, the Setup. Blitz consists of 2 rounds where players switch sides during half-time. Each team houses one goal; a portal that a member of the enemy team must enter in order to score a point.

“To score points, you or one of your teammates must enter the other team’s goal,” writes Infinity Ward in a recent blog update. “Entering a goal awards a single point and instantly teleports the goal-scorer to a different section of the map. A 10-second cooldown is applied to the goal after scoring a point. Nobody can enter the goal during this time.”

Sides switch when the time limit of 10 minutes has been reached, or one team scores 8 points. The maximum amount of points a team can earn is 16.

Now, for some strategies, as seen on the latest blog entry.

Speed is your friend. Perks like Marathon (unlimited sprint) and Agility (increased movement speed) leave the enemy players in the dust when rushing their goal. If you find yourself face to face with a defender, Ready Up (weapon is ready faster after sprinting) and Quickdraw (faster aiming) speed up your reaction time to quickly drop out of sprint and defend yourself before scoring the point. If you’re really cutting it close, rush the goal and drop to a knee slide to zip in and avoid incoming shots.

Closing in on the enemy goal, but don’t trust that hidden corner coming up? The Smoke Tactical grenade might just be what you’re looking for. Toss it out and rush in unhindered. Just try not to deploy it too early, as nearby enemies will likely see the smoke and follow up with explosives. You don’t want to be there when that happens.

As with all team-based modes, coordination wins games. While the 10-second cooldown prevents groups from entering the goal simultaneously, it’s still advantageous to stick together. Designate one player to rush in for the point while the others take up posts in the perimeter, fighting off incoming enemies until the goal resets.

Once an enemy player gets close to your team’s goal, they’re more likely to throw awareness out the window and rush right for the point. They might make a quick check of the immediate surroundings, but they’re likely more concerned with reaching the goal. Use this to your advantage and set up in vantage points that aren’t easily spotted at first glance.

The I.E.D. Lethal equipment and the I.M.S. Assault pointstreak are both highly effective proximity explosives. Set these near key chokepoints leading to your team’s goal and make enemy rushers think twice before blindly racing toward your goal.

After scoring a point and teleporting away, take some time to defend your own goal. Chances are, you already have other teammates closing in on the enemy goal. If everyone’s attacking, your own will be wide open for the taking.

What’s your take on the new Blitz game mode so far? Are you excited to try it out? You’ll be able to when Call of Duty: Ghosts launches on November 5.