This year, Call of Duty: Ghosts developers Infinity Ward are yet again revamping the perk system which has become a staple feature of the series since its debut in Call of Duty 4: Modern Warfare.

Instead of the traditional three tiers of perks that every Call of Duty title has adopted ever since, the studio will be introducing four additional tiers, equalling out to seven in total, each with their own unique role.

In total, Call of Duty: Ghosts will boast 35 different perks, which may send your head into a dizzy spin considering the amount of combinations that were available with only three tiers originally.

Luckily, to help explain how these perks are unlocked, equipped and used is a recent blog entry that the studio published on the official website. So, take a moment to read up on everything there is to know about Call of Duty: Ghosts’ perks below!

Be sure to let us know in the comments what sort of combinations you’ll be testing out first when the game launches next Tuesday, November 5. 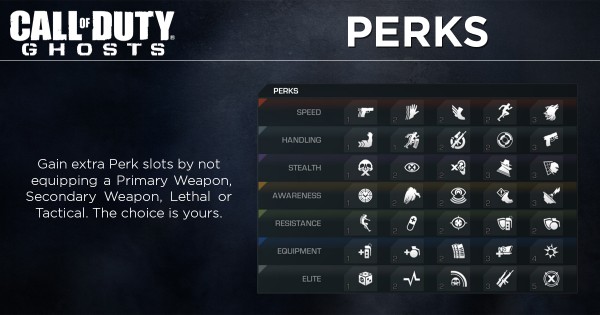 Each of the 35 available Perks is weighted with a point value of 1 through 5. Your loadouts naturally have a pool of 8 points to spend on Perks, up to a total of 12 depending on your loadout choices.

In addition to the initial 8 points, a single Perk point is tied to the Primary Weapon slot, Secondary Weapon slot, Lethal and Tactical. Take away any one of these items for an additional Perk point, allowing a maximum of 12 points to spend. If you’re a Perk fanatic, you’re welcome to forego all weapons and equipment, starting each spawn with only a knife in hand and 12 points worth of Perks. It’s your choice.

Perks are unlocked in one of two ways. Each Perk is marked with a level and a Squad Point cost. Once you reach the listed level, the Perk is automatically unlocked for use. If you’d rather unlock a Perk early, you can also choose to spend the listed amount of Squad Points for immediate access. Can’t wait to unlock Blast Shield for your Domination matches? Pay the listed Squad Points ahead of time and it’s yours to use.

Each Perk belongs to one of seven different Perk Categories. Mix and match as you see fit to create a near unlimited number of loadout combinations, from quick and stealthy to tough and armed to the teeth.

Outrun and outmaneuver enemy players. Speed Perks are all about getting the lead and staying ahead. Examples include:

Dexterity and control drives the Handling Perks, improving actions and accuracy. Examples include:

On the Go: Reload while sprinting.

Stealth Perks aid you in staying out of sight, maintaining a low profile and engaging on your terms. Examples include:

Keep in tune with your surroundings. Awareness Perks help you survey the environment and detect enemy players. Examples include:

Wiretap: Utilize all active enemy and friendly SAT COMs on the field.

A hardened endurance reduces the effects of fatigue. Resistance Perks keep you going through tough engagements. Examples include:

Focus: Reduced weapon sway when aiming down sights and reduced flinch when hit.

Tacticians swear by their gear, and Equipment Perks ensure you have the best tools on hand. Examples include:

Elite Perks offer special abilities that affect your loadouts in a variety of ways. Examples include:

Gambler: Spawn with a random Perk.

Ping: Activate a sonar ping upon killing an enemy, revealing nearby hostiles.