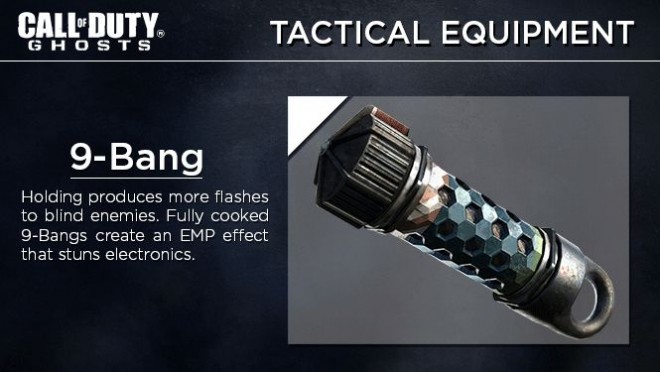 The 9 Band tactical grenade returns to Call of Duty: Ghosts, but with a few new and interesting tweaks.

In Ghosts, the 9 Bang will use a tiered power system to determine the grenade’s effect on the enemy. The longer you hold or “cook” the grenade before throwing, the more potent its blinging effects will be. Additionally, a fully cooked 9-Bang will release an EMP blast that stuns nearby electronics.

“The 9-Bang’s power system challenges players to plan ahead and think more tactically when engaging enemies,” says Multiplayer Lead Tom Wells. “Caught unaware? You can still toss it right out like a traditional flash grenade in a hurry. Prep a fully charged 9-Bang, however, and you’ll disrupt defenses in a big way.”

Quick thinking will be required to decide what level of strength that is needed for the situation.

There are a few counters to consider, however, according to a recent developer blog update:

The Tac Resist perk greatly increases resistance to the 9-Bang’s effects. This obviously benefits enemy targets, but it’s also worth considering if you plan on equipping the 9-Bang yourself.

Equipping Tac Mask reduces the penalty of deploying the 9-Bang in close proximity, allowing you to play more aggressively without as much worry about potential backfire.

The Trophy System Tactical equipment counters up to two projectiles, including the 9-Bang, fully charged or not. Be prepared to defend yourself if your equipment gets vaporized.

A companion drone that detects enemies based on proximity and protects you from explosives.

Found in the Support Strike Package, the Night Owl protects its user against multiple explosives, including the 9-Bang. At a cost of 10 points, they’re not something you’ll run into left and right, but they’re a real pain when encountered. Use a non-explosive weapon to take them out on sight.

Be sure to check out last week’s highlight that focused on the new Call of Duty: Ghosts game mode, Blitz.