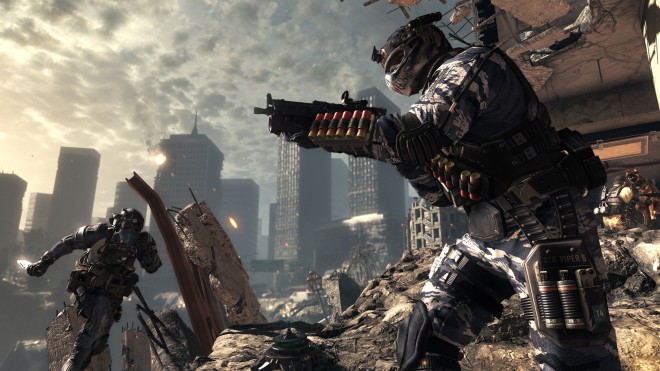 We’ve already told you everything you need to know about the game, so it’s about time to finally see it in action, uncut – just real gameplay the way you’ll see it when Call of Duty: Ghosts launches on November 5.

In our first clip, you can check out the Vector CRB in action, equipped with a red-dot sight and a suppressor, along with some new perks that I found very helpful: Sleight of Hand, On The Go, Blast Shield and Ping. Here, you’ll see the new game mode Cranked on the map Strikezone. With every kill, I gain faster movement speed, reload speed, and ADS speed. But of course, I only have 30 seconds get another kill before I explode. It’s a really fun, high-speed game mode that encourages constant movement.

In this clip, I stuck to the same loadout, but I tried to showcase a few of the game’s new mechanics. I spent some time sliding around using the new knee-slide move, peaking around corners using the new contextual lean feature, and experimented with the new mantling system. I also tried to show off how the brand new perk On The Go allows you to reload while sprinting – already one of my new favorite perks. In the very beginning, I also tried to show off the new dual render scope system that allows you to ADS while keeping your peripheral vision. Other than that, you’ll see some traditional TDM on the map Octane.

In the next video, I went with a very different loadout, utilizing the IA-2 from Call of Duty: Ghosts’ new weapon class, the Marksman Rifle, along with perks like Sleight of Hand, Off the Grid, Fully Loaded and Ping. I have my rifle equipped with a simple red-dot sight for quick target acquisition, though other attachments will allow you to turn it into a 3-round burst weapon, if you so choose. I quickly noticed how powerful it can be at medium-to-long ranges, even as a single-shot, semi-automatic weapon. Two good chest shots will down an opponent very quickly. This winter map called Whiteout was host to a nice game of Domination.

We hope you enjoyed this more down-to-earth look at Call of Duty: Ghosts multiplayer. Let us know your thoughts in the comments section below! How do you think the gameplay stacks up to previous Call of Duty titles so far?

Stay tuned for our written and video impressions of our hands-on time with the game.

Battlefield 4 – DICE and EA Launch “Only in Battlefield” Video Series