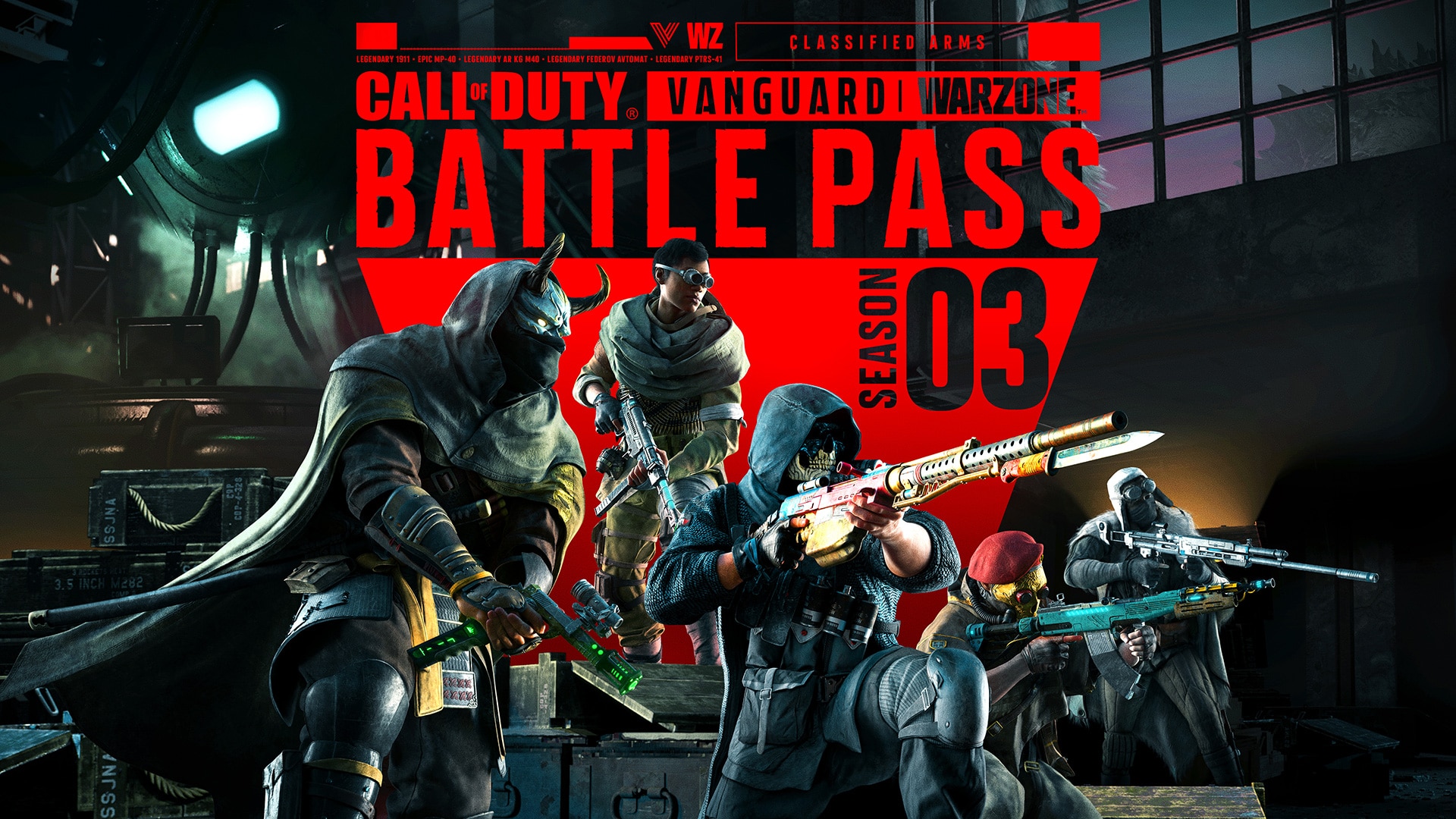 As Classified Arms arrives this April 27, Activision has revealed the COD Vanguard and Warzone Season 3 Battle Pass trailer, in addition to details surrounding the new 100 levels coming to the games. Check out the trailer and additional details below.

Below is a rundown of everything coming with this new Battle Pass for COD Vanguard and Warzone Season 3:

For Operation Monarch, Operators can become more than elite: with the help of limited-time Bundles based on Godzilla, Mechagodzilla, and Kong, they can become a (human-sized version of) the ultimate superspecies.

Ready to rule the island?

The Tracer Pack: Kong Limited Time Bundle celebrates a Titan with nearly 90 years of history with nine items, including a Legendary “Kong” Operator Skin for Wade inspired by the ruler of Skull Island.

Wield the power with three Legendary Weapon Blueprints: the “Temple of Kong” Sniper Rifle and “Skull Island Shaker” SMG which shoot jungle green tracers, as well as “Kong’s Scepter,” a variant of the Axe “Skål Crusher” melee weapon that turns it into the weapon Kong’s ancestors supposedly crafted.

The rest of the Bundle includes items based off Kong: a powerful “Gravity Inversion” Finishing Move, a “Primal Power” Spray, a “Jia’s Doll” Weapon Charm, a “Kong Roar” Animated Emblem, and a Vanguard-exclusive “Watch Your Back” Highlight Intro.

Prepare to intimidate your opponents with the Tracer Pack: Godzilla Reactive Mastercraft Limited Time Bundle, a nine-item pack based on the beloved reptile.

In addition to the Legendary “Godzilla Ghillie” Operator Skin for Shigenori, fans of Godzilla can be like their favorite Titan with the Ultra “Breath of Godzilla” Mastercraft Weapon Blueprint. This Assault Rifle is stylized to look like a miniature version of the beast and shoots icy-blue heat ray tracers similar to that of Godzilla’s signature heat ray attack.

But the Titans are not alone. In a time of monsters, humanity built its own… designed to make us the ultimate dominant species. A precision engineered Apex Predator: Mechagodzilla!

Don its armor and become the apex hunter you were born to be with the Tracer Pack: Mechagodzilla Limited Time Bundle. With this Bundle, you get the Legendary “Mechagodzilla” Operator Skin for Constanze, and nine other items, with two — the “Machine Learning” MVP Highlight and the “Rival Protocol” Highlight Intro — being Vanguard exclusive.

The rest of the items are the finest that Apex Cybernetics could forge: the Legendary “Cybernetic Destroyer” Assault Rifle, the Legendary “Neural Uplink” SMG, the deadly “Nanometal Tail Blade” melee weapon, a “Network Uptime” Watch, “Mechagodzilla Head” Charm, and its very own logo featured as the “Evolving Together” Emblem.

All three Bundles will be available during Operation Monarch — stay tuned for offiial updates on their exact release dates.

During Operation Monarch, it might take more than one Titan to dominate Caldera.

Those who want to become the ultimate superspecies collector and purchase multiple Operation Monarch Bundles — the Kong, Godzilla, and Mechagodzilla packs — before June 16th will receive additional rewards.

Purchase any two Bundles to receive the exclusive “Godzilla vs. Kong” Weapon Sticker and the “Superspecies” Player Title. Grab all three, and you’ll receive a Legendary “Apex Phase Rifle” SMG, one that could make a colossal statement in close-quarters engagements.

These bonus rewards will be granted when Classified Arms is Reloaded later this season.

Plus for a limited time, all members of Team Kong, Team Godzilla, and Team Monarch can head over to Monsterverse.com for an exclusive set of Godzilla vs. Kong Calling Cards to show off your Titan team spirit or flex your Monarch security clearance level in battle.

Before the Monster of All Battles begins, Operators can gear up with Season Three Battle Pass, highlighted by prototypical weaponry and over two dozen free items through the Battle Pass System:

– Two Hard-Hitting Free Functional Weapons. Aim true with the hard-hitting M1916 or spray a torrent of rounds with the blazing-fast Nikita AVT, both for use in Multiplayer, Zombies, and Warzone.

– Over 25 Free Items, Including New Reticles, Weapon Blueprints, Calling Cards. Diversify your optics with the “Wide Eye” and “Box Out” reflex reticles. Equip new Weapon Blueprints like the “Retrofashioned” Shotgun, “Regimental” Marksman Rifle, and the Legendary “Photon Phantom” Pistol. Show off the new “Factory Settings” and “Core Reaction” Calling Cards, plus a new Charm, Operator Skin, and MVP Highlight, free for all players.

– 1,300 Total COD Points. Get300 free COD Points within the Battle Pass System, plus 1,000 more to unlock across the full Battle Pass.

Born into a large immigrant family in Texas, Mateo Hernandez dreamed of becoming a civil engineer. He joined the Navy and fought as a tail gunner in the Pacific.

Learn more about him, and the rest of Task Force Harpy, in our biographical overview for the new squad here.

Equip his Favorite Weapon, the new M1916, and level him up to unlock thousands of Player XP and Weapon XP for the M1916, two additional Operator Skins, two Quips, the “No Escape” Finishing Move, and more.

Like previous seasons, the Season Three Battle Pass System gives you two weapons with which to build a new Loadout. And with Classified Arms, Captain Butcher made sure to pick only the most powerful prototypical weapons — yours for free at Tier 15 (M1916) and Tier 31 (Nikita AVT).

“A semi-automatic rifle with a deadly combination of power and fire rate. Lethal at any range in the hands of a capable marksman.”

“Accurate and reliable with best-in-class fire rate, this assault rifle can be outfitted to exceed in CQC or long-range combat scenarios.”

With new prototype weapons in the wild, you can be sure to find the latest Weapon Blueprints in development via the Season Three Battle Pass.

Here are some of our favorite Weapon Blueprints to be found on your way to hitting Tier 100:

The Battle Pass also features a new Operator Skin every 10 Tiers, including “Sandshine” Padmavati at Tier 30 and “Green Guardian” Solange at Tier 70.

Stay tuned here at MP1st for the full patch notes on COD Vanguard and Warzone Season 3 and its battle pass as it drops on the 27th!

Diablo 2 Resurrected Update 1.15 Out for Controller Fixes & More This April 25