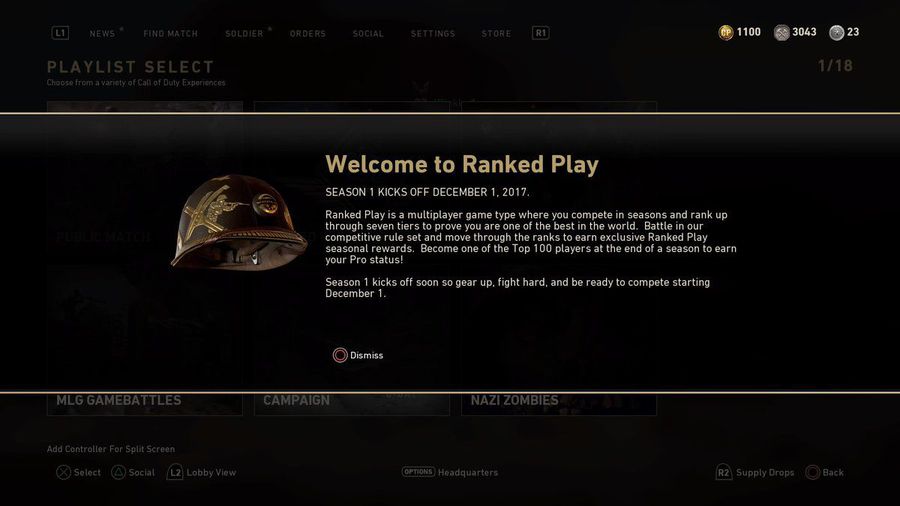 If you’re one of the many people who want their shooters to be serious business, then you’ve no doubt competed in the first season of Call of Duty: WWII Ranked Play. With the first season set to end this January 30, Sledgehammer Games has now opened up a bit on what players can expect in season two!

Over on Reddit, Sledgehammer Games boss Michael Condrey posted a long message on what players can expect for the COD: WWII Ranked Play S2 changes, and more.

Season One: The Placement Season is coming to an end on Jan 30th. This is your last weekend to earn the highest tier rewards before Season Two begins next week.

When Season One first rolled out, we needed to gather a bunch of player data to help establish individual MMR data, and initial placement balancing. We then introduced 2p parties to the offering, and gathered party data for Ranked MMR.

A lot of people played Ranked throughout Season One, and we have learned, and fixed, a bunch of things along the way. Some people were frustrated that initial placements could miscount wins as losses. Some people found exploits that allowed them to cheat their way up to higher tiers (we know who they are, and we will not be awarding them any Pro Tier rewards in Season One). Some people felt the lack of XP was not ideal. And some wanted 4 player parties enabled.

We’ve taken all of the Season One data, and feedback, to heart. Season Two, with a host of improvements, will begin on Feb 1 as a level playing field for all. Everyone will have the opportunity to play their Season Two placement matches again. This will reset anyone who cheated during Season One, or felt their initial tier was impacted by placement bugs. XP will be rewarded from the start of Season Two. And we’re looking for the right way to bring 4player parties during Season Two. (This is harder to get right than it seems – the last thing we want is for 4p teams to stomp non-partied teams into the dirt in Ranked, or have incredibly long waits to be matched against other 4p teams. Game Battles is a great way for 4p teams to compete against other full teams for bragging rights, in the mean time).

In short, congrats to everyone on their S1 success. We’re excited for the start of S2, and hope you see a bunch of improvements that we’ve worked on throughout the last season. We’ll have more updates next week as Season One concludes. Until then, we hope you enjoy The Resistance event.

Have a great weekend, everyone! I’m off to take down Occupation! See you online.

For those not interested in super competitive play, don’t forget, there’s a lot of new stuff rolled in by Sledgehammer due to the Resistance Event happening now, until end of February. Speaking of the Resistance, the first expansion pack, which is named the same, has a new trailer which you can watch here.